Based on old original tags with artifacts, ET9350, ET11446 and ET12245 appear to be from the same collection. It seems, though these tags are faded and fragmentary, that they say Wanganui on them, as well as identifying the pieces. It appears that ET105 is from this same collection as well, though it has no old tag with it. The information on the T number card, including the number 66, seems to be quoting from the now missing tag. The tag for ET12245 appears to be written on/over a visiting card printed with a name R W Woon. There was a Richard Watson Woon (1834 - 1888) who was a Native Interpreter and Clerk to the Bench and Resident Magistrate in Wanganui, New Zealand in the 1800's. The handwriting on these tags matches Woon's handwriting in letters in the collections of the Alexander Turnbull Library, Wellington, N.Z.

See pp. 615 - 617 in Transactions and Proceedings of the New Zealand Institute Volume 9, 1876; link to p. 617 here: http://rsnz.natlib.govt.nz/image/rsnz_09/rsnz_09_02_0749_0617_ac_01.html . On 16 September 1876, Dr. James Hector gave an account of his travels to a meeting of the Wellington Philosophical Society, including information on the New Zealand exhibits at the 1876 Centennial Exposition in Philadelphia: "He mentioned the objects which appeared to attract most attention, and referred particularly to the exhibition of Feather Furs by Mr. Liardet, a magnificent series of Photographs by Mr. Deveril, Messrs. Burton Bros., and others, and a fine collection of Maori exhibits forwarded by Mr. Richard Woon, R.M., of Wanganui." On p. 223 of the book Norton, Frank H., and Frank Leslie. 1877. Frank Leslie's historical register of the United States Centennial Exposition, 1876. Embellished with nearly eight hundred illustrations drawn expressly for this work by the most eminent artists in America. Including illustrations and descriptions of all previous International exhibitions. New York: Frank Leslie's Pub. House, there is a description of the New Zealand section at the Centennial Exposition, including descriptions of Maori artifacts displayed there: "There are also ... flax mats, ornamented with red feathers of the kaka, or mounted parrot; others interwoven with feathers of the native wood-pigeon, one in particular intended as a gift to the President of the United States ... ."

ET105 is a flax and feather cape or cloak, with wide bottom border, and narrow side borders, of taniko (geometric patterning) of black-dyed and natural muka (flax fiber). See the list of the collection made by Richard Watson Woon for display at the New Zealand exhibit of the 1876 Centennial Exposition in Philadelphia; see list on p. 335 of Great Britain. Executive commission, Philadelphia exhibition, 1876. 1876. Official catalogue of the British section, Part I. London: Printed by G.E. Eyre and W. Spottiswoode, for Her Majesty's stationery office, http://babel.hathitrust.org/cgi/pt?id=mdp.39015067183486;view=1up;seq=345 . Presuming ET105 is indeed from Woon, despite an apparent mismatch of original numbers, this object appears to be the one listed as: "38. [original owner] Captain Wirihana Puna. - Kakahu Kura, ornamented flax and feather mat; intended as a gift to the President of the United States." [Ulysses S. Grant was the President in 1876.] Kakahu kura, also called Kahu kura, are cloaks woven with the feathers of of the New Zealand kaka (Nestor meridionalis), a native parrot.

James Hector of the (New Zealand) Colonial Museum and Geological Survey was the Representative Commissioner for the New Zealand exhibits at the Philadelphia Centennial. In addition to material sent from New Zealand, these exhibits also included some artifacts borrowed from the Smithsonian through Joseph Henry. A group of Maori artifacts provided by Richard Watson Woon were a subset of the New Zealand Centennial exhibit. Hector, while in the U.S. in 1876, also visited Washington, DC and Spencer Baird. Though Woon indicated that the majority of the Maori exhibits should return to New Zealand, two artifacts were designated as gifts for the President of the United States, and a few other pieces also were not returned to New Zealand. The objects intended as presidential gifts, ET12245 and ET105, and also at least two other pieces, ET9350 and ET11446, all became part of the Smithsonian collections, under Accession No. 5733, though the Department of Anthropology never seems to have assigned catalogue numbers to them. The Archives at the Museum of New Zealand Te Papa Tongarewa has correspondence in their files from Woon related to the Centennial exhibition artifacts; see in particular MU000177/001/0160. The Te Papa archives also has a letter, MU000177/001/0002/0001, dated July 8, 1876, from Spencer Baird to James Hector, thanking Hector for transferring objects that had been displayed at the Centennial to the Smithsonian U.S. National Museum. See also New Zealand. 1858. Appendix to the Journals of the House of Representatives of New Zealand. Auckland [N.Z.]: Printed for the House of Representatives by W.C. Wilson at the Printing Office; Report of Royal Commission Appointed To Secure The Representation Of New Zealand, Philadelphia Centennial International Exhibition of 1876. https://books.google.com/books?id=cSxAAQAAMAAJ&lpg=RA4-PA49&dq=motumotu%20flax%20new%20zealand&pg=RA5-PA1#v=onepage&q=motumotu%20flax%20new%20zealand&f=false . 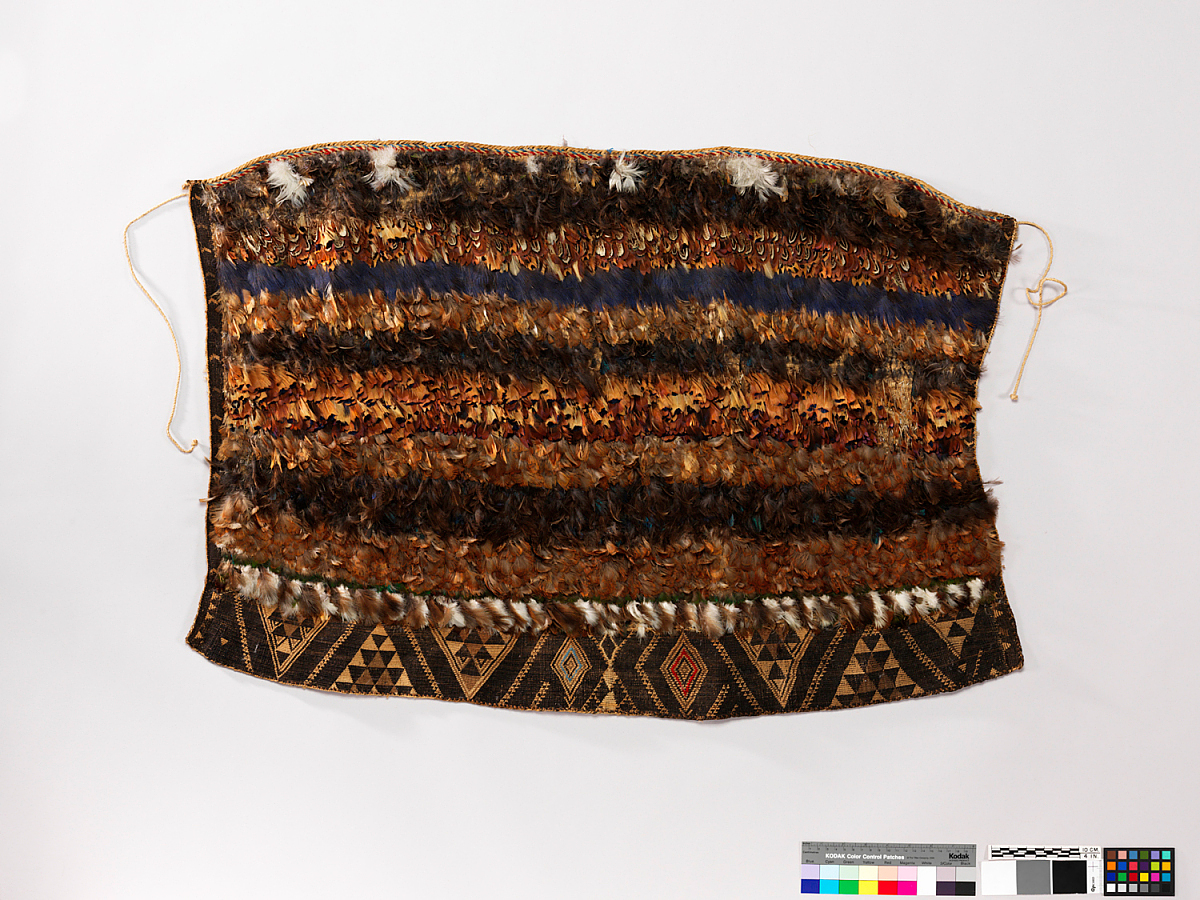 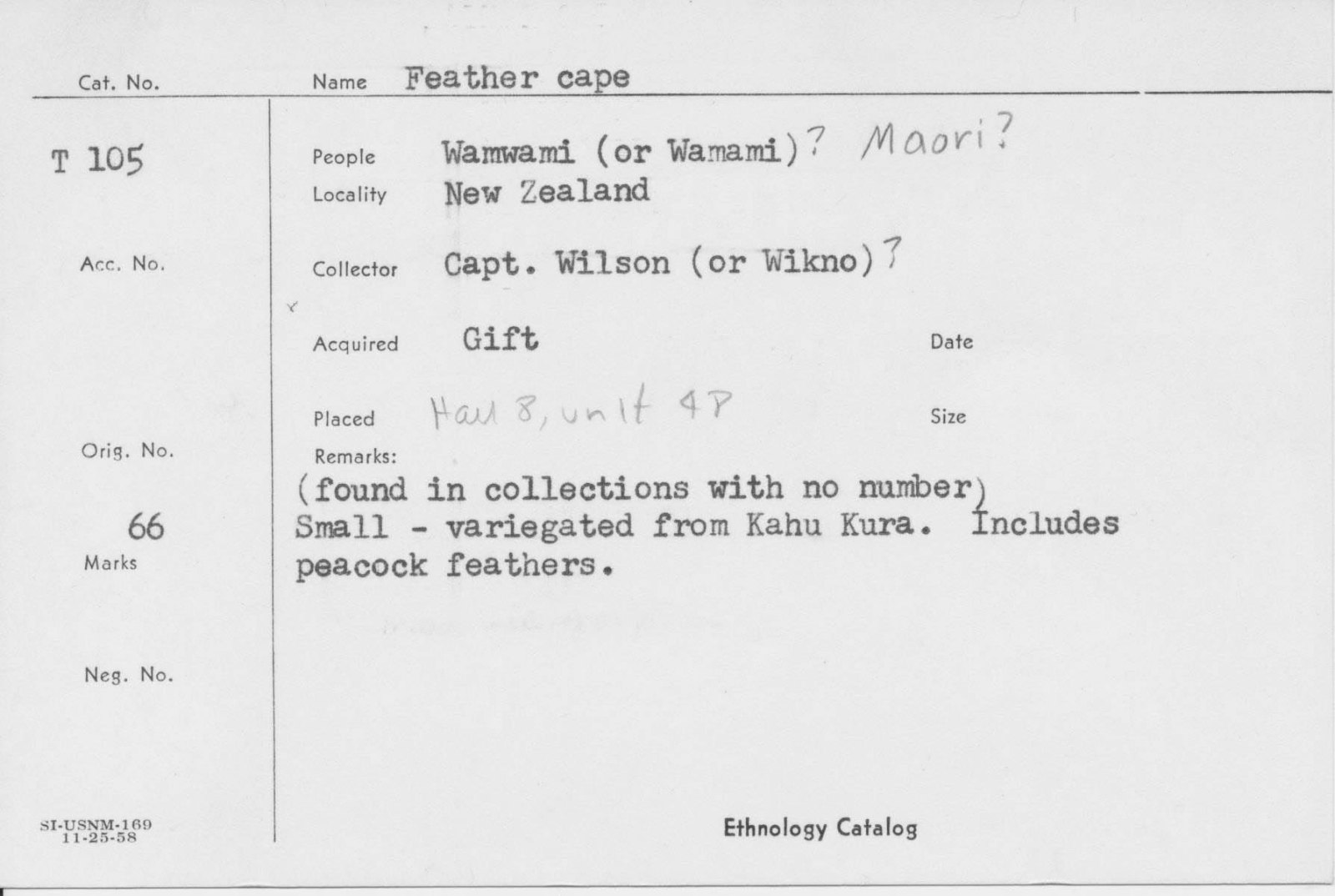