It's that time of year again: The research that makes people "laugh and then think" is being honored with the Ig Nobel Prizes, a parody of the prestigious Nobel Prize.

Ten of these prizes were awarded in this year's farcical ceremony in Boston, the 27th installment of the humorous awards. Amidst brief lectures, paper airplanes, "human spotlights" and an opera with a bizarre psychology theme, researchers accepted thieir awards from true Nobel Prize winners. Here are five of the most notable topics to make you first laugh, then think:

Along with being ruthless hunters and gifted charmers, cats are famous for their ability to fit themselves into the tighest of spots—whether it be a box, a bowl or a jar. The seemingly fluid nature of these slinky beasts intrigued researcher Marc-Antoine Fardin, who specializes in rheology, or the flow of matter. Fardin set out to investigate the properties of cats to determine if our furry friends could be considered both liquid and solid. Using the physics of fluid dynamics he calculated how quickly cats can contort themselves and take on the shape of their surrounding container.

Fardin's results suggest that cats have both liquid and solid properties, but further work is necessary, according to his study published in The Rheology Bulletin in 2014. He concludes, "cats are proving to be a rich model system for rheological research." And as he tells Hannah Devlin at The Guardian, the work has actually “raised some interesting questions about what it means to be a fluid." For his research, Fardin was awarded the 2017 Ig Nobel Prize for physics.

Put the speaker where?

Expecting mothers often seek to stimulate or relax their unborn babies with music played through their bellies. But how much can babies hear it through layers of skin and muscle? Not much, actually. There is, however, an unorthodox way to help up the volume: vaginal speakers.

In 2015, a group of Spanish researchers demonstrated how music played through speakers inserted into a pregnant woman's vagina caused much greater changes in the facial expressions of the fetuses than music played through the belly. They've since patented a "fetal acoustic stimulation device" that a mother can use to deliver tunes to her baby, and you can purchase your own "Babypod" speaker online for $165.95. For this research and invention, the group was awarded the 2017 Ig Nobel Prize for obstetrics.

Just don't play it too late at night

Sleep apnea can not only cause annoying snoring, but the associated lack of sleep can drive people crazy or even kill them. Treatments often include bulky continuous positive airway pressure devices that pump air into a person's throat to keep their airway open. But an ancient Australian instrument has turned out to be a much more interesting and less invasive treatment. A group of Swiss sleep researchers had 25 patients with moderate sleep apnea learn to play the didgeridoo as a way to strengthen the muscles of their airways and help them breathe better while sleeping. The results, published in a 2006 study, found that after regularly playing the instruments, the patients (and their long-suffering partners) reported sleeping much better and with less snoring. For this finding, the researchers were awarded the 2017 Ig Nobel Prize for peace.

Humans have happily consumed cheese for thousands of years in locations around the world, but for some people (including this reporter), the substance is more "yuck" than "yum." To figure out why cheese can "be perceived as particularly disgusting to some individuals," a group of French neuroscientists scanned the heads of cheese revilers to see how food disgust works in the brain. They published their results in the journal Frontiers in Human Neuroscience last year.

The researchers found that not only are a higher percentage of people disgusted by cheese than by most other types of food, but that the brain's reward circuits are flipped off when a person observes food they find disgusting, such as cheese. For this vital work, they were awarded the 2017 Ig Nobel Prize for medicine.

Wait, which one are you?

People often struggle to tell identical twins apart—some twins even intentionally differentiate themselves in response. But one would assume that at least the twins would be able to tell each other apart in pictures. Not really, according to a 2015 study from a group of Italian psychologists. When shown pictures of their own faces and those of their twin in rapid succession, the study subjects were unable to accurately identify who was who, just like the rest of us. For this work, the group was awarded the 2017 Ig Nobel Prize for cognition.

You can see the rest of the prizes, acceptance speeches and ceremonial hijinks in the video below. 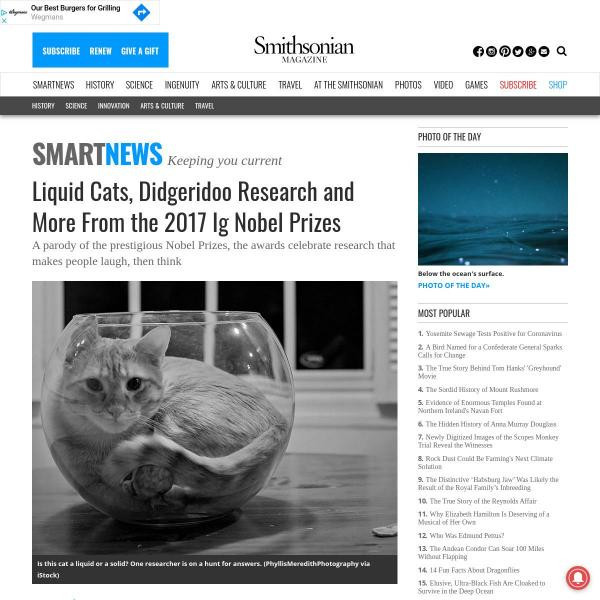