Torrey Rodgers forges through the Panamanian rainforest, holding a bucket of rotting pork. The wildlife scientist is on a mission to collect flies—hundreds and hundreds of them, if he’s lucky. Far from jungle pests, he sees these buzzing, iridescent green insects as helpful lab assistants, ennabling him to take stock of the inhabitants of threatened rainforests around the globe.

One way to measure the health of a forest is to tally up its biodiversity, or the richness of plants and animals that teem within. Scientists embark on this kind of forest census to monitor poaching or chart the progress of conservation efforts. But rainforests pose a particular challenge: You have to trek miles through dense greenery, searching for elusive animals that may only come out at night and, oh yeah, they're full of things that can kill you.

That’s why it’s usually done by ecologists who are well versed in the jungle ecosystem and the fauna who live there. These zoologists know how to navigate the untamed land, accurately identify diurnal and nocturnal creatures and place covert camera traps to photograph the most elusive wildlife. The trouble is, these kinds of forest-trekking, fauna-knowing experts are as rare as the wildlife they track.

And without such a census, conservation efforts are futile. “Say you propose a nature reserve, and you put tons of resources into protecting this area...well did any of that actually work? Are we losing species or having a positive impact?” asks Rodgers, a research associate in Utah State University's Department of Wildland Resources.

That’s why Rodgers has enlisted some unlikely helpers to do his wildlife surveying for him: carrion flies. For these scavengers, the rainforest is a vast buffet, featuring dishes from carcasses to festering wounds on living animals to every imaginable type of poop. Every bite logs a distinct DNA sample of that meal in the flies’ guts, until it comes out the other end. Now, as Rodgers and his colleagues report in a recent study in the journal Molecular Ecology Resources, researchers can use that DNA to build a census of jungle’s most elusive mammals.

Owen McMillan, an evolutionary biologist at the Smithsonian’s Tropical Research Institute (STRI) in Panama who was a co-author on the study, recognizes that Rodger’s scheme to capture the diversity of an entire rainforest using only fly guts is unorthodox. “It may sound harebrained,” he says, “but it’s not if you think about the way these flies make a living.”

As airborne foragers, this family of flies can sample virtually any type of rainforest animal. Every organism’s DNA is present in all of its biological matter, from blood to poop, and provides an identifiable genetic marker. If researchers could somehow sample all the DNA within a rainforest, they’d have a complete picture of everything living there. “That’s where the flies come in handy,” Rodgers says. “They go out and do the sampling for us.”

In 2015, Rodgers journeyed down to Barro Colorado Island, a densely forested island in the middle of the Panama Canal, and put his fly survey idea to the test. He fashioned 16 simple fly traps out of two plastic water bottles, connected like an hourglass. Each one contained a morsel of pork as bait, which was kept mostly out of reach of the flies by a screen.

After a few unsuccessful trials, Rodgers learned that the flies were picky eaters. They preferred meat that had been left in the sun until it reached that sweet spot of just-rancid funk. “They’ll come to rotting meat really quickly,” he says, “I had to pre-rot it which was pretty disgusting.”

Once he had figured out the flies’ dietary preferences, the traps began filling up with imprisoned flies so quickly he had to empy them twice a day. Unfortunately for them, attempting to feast on the rotting pork would prove to be a fatal mistake: Rodgers brought them back to the lab, flash froze them, snipped them into chunks and ground them into a paste to enable extracting the DNA from within their guts.

To detect even the rarest animals in the flies' guts, he would need to use a DNA amplification technique to multiply special regions from only the ingested mammal cells. The goal was to pick out certain molecular markers, which are regions in the genome that serve as barcodes. Those short fragments can be matched against a database of over 5,000 mammals, and a smaller database of species known to exist on the island.

He collected more than 1,000 flies over the course of three months, amassing enough gut DNA data to compare against eight years of traditional surveys previously collected on the island. Just as Rodgers predicted, the flies got around; the researchers detected 20 mammal species, four birds species and one lizard species. “It was surprisingly accurate,” McMillan says. “At least as accurate as walking through the forest.”

Not only that, but the data was far richer than the previous surveys because DNA sequencing generates millions of data points. “You still have to filter out things that are essentially noise ... like pork,” McMillan says. But once filtered, the mammal DNA fragments amplified from fly guts closely mirrored the species composition expected in the rainforest on Barro Colorado Island.

There were, however, a few notable exceptions. Curiously, they didn’t find barcodes that matched the three most abundant mammals: there was no trace of the rodentine agouti, the raccoon-like white-nosed coati, or the brocket, which looks like a squat relative of deer. Rodgers believes this has to do with his lab assistants’ inherent bias. The agouti’s scat, for instance, isn’t particularly appetizing to flies. “It’s really hard and maybe more difficult and less appealing,” he says.

Conrad Gillett, an entomologist at the University of Hawai’i who also uses molecular techniques to study insect guts, agreed that that fly dietary habits could be a considerable bias. Other studies have used bugs like mosquitoes and dung beetles, Gillett’s insect of choice, and could be added to rainforest surveys to increase the diversity mammals detected.

Still, this is a quick and effective method for surveying diversity that could be employed in many environments, says Gillett. “It’s definitely something that’s worth investigating,” Gillett says. “Right now I’m not sure if [flies] can be relied upon exclusively for a survey, but as an adjunct, absolutely. It’s something that has to be considered.” The technique’s simplicity makes it even more appealing. “It’s just hanging pork in the forest,” McMillan says.

After trying this survey method in a well-studied forest, McMillan hopes the approach could be used in other settings where the fauna are still a mystery. This will present another challenge: Unlike on Barro Colorado, many forests are filled with animals that have yet to be named, let alone assigned a DNA barcode. But as DNA barcoding becomes more common and databases grow, researchers believe they’ll be able to detect even the rare species that are hard to track from a conservation perspective.

“Because Barro Colorado Island has been studied so well by so many scientists for so long, you can put it into the broader context,” McMillan says.

Better yet, there isn’t a threatened forest on Earth that doesn’t have flies. “This group of flies is present worldwide. They’re common in every single habitat,” Rodgers says. Thanks to these creative scientists and their harebrained idea, we may need to consider these ubiquitous insects as not merely pesky nuisances, but as valuable conservationists in their own right. 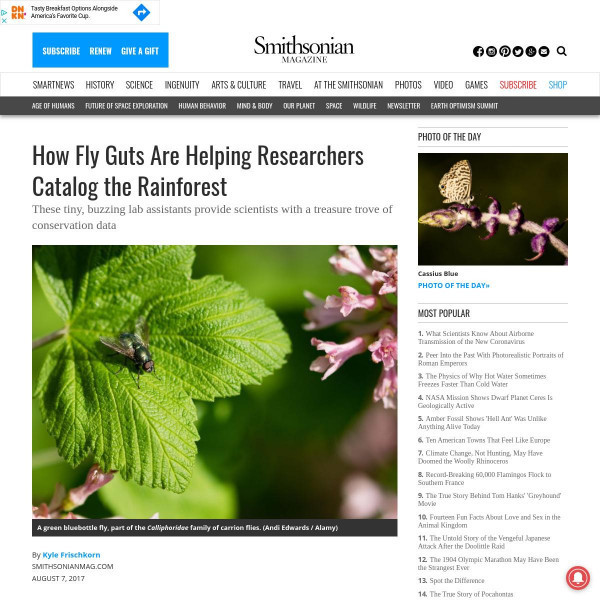