Browse through a gluppity-glup Dr. Seuss book or the frabjous poetry of Lewis Carroll  and you’ll find words that are simply funny, regardless of their meaning or context. So why are some words perceived as funny while others aren’t? It’s hard to say, but a new study is making a start at figuring it out. As Douglas Main at Newsweek reports, researchers at the University of Warwick in the U.K. conducted a survey to find the funniest real words in the English language.

The researchers selected 4,997 words based on lists developed in past research to get a representative sample of English. Then, using Amazon’s Mechanical Turk crowdsourcing platform, they asked 821 individuals to rate the humor value of 200 randomly selected words from the list on a scale of 1 to 5.

So what was the funniest word in the group? Booty, with a mean rating of 4.32. The other words in the top dozen, which all received a score of 3.9 or higher in descending order are Tit, Booby, Hooter, Nitwit, Twit, Waddle, Tinkle, Bebop, Egghead, Ass and Twerp.

Women found the words giggle, beast, circus, grand, juju, humbug, slicker, sweat, ennui, holder, momma and sod funny while people under 32 were partial to goatee, joint and gangster. People older than 32 thought squint, jingle, burlesque and pong were hilarious. The words rape, torture, and torment were the least funny across the categories. They published their results in the journal Behavior Research Methods.

In the paper, the researchers explain that philosophers and scientists have struggled to find a reason behind humor for centuries. While social scientists have come up with databases of which jokes people think are funniest, this study is investigating humor at the atomic level. “The database we present here offers a basis for studying humor in perhaps a highly rudimentary 'fruit fly' version, at the level of a single word,” they write. “If single words have reliable humor ratings, they provide humor in miniature, allowing us to investigate humor in relation to the many existing lexical norms.”

There are some theories out there explaining why some words are funny. For instance, as Danny Lewis reported for Smithsonian.com in 2015, psychology professor Chris Westbury at the University of Alberta came up with a formula that described what made a nonsense word seem funny to people. He found that nonsense words that sounded like real words weren’t that funny. But the more a word violated the expected norms of language, the more hilarious it is. For instance, the nonsense word “anotain” is not very funny, while the vaguely Dutch “snunkoople” is hilarious.

Westbury’s findings seem to line up with philosopher Arthur Shopenhauer’s “incongruity theory,” which says humor lies in the violation of expectations, like when a giant, muscle-bound weightlifter speaks with a high squeaky voice.

Lead author of the study Tomas Engelthaler doesn’t say whether his funny words fit any particular theory, but hopes researchers will use the list as a jumping off point. “The research initially came about as a result of our curiosity. We were wondering if certain words are perceived as funnier, even when read on their own. It turns out that indeed is the case,” he says in the press release. “Humor is an everyday aspects of our lives and we hope this publicly available dataset allows future researchers to better understand its foundations.”

Or at least understand how to better fluggernuff their pongkrongs. 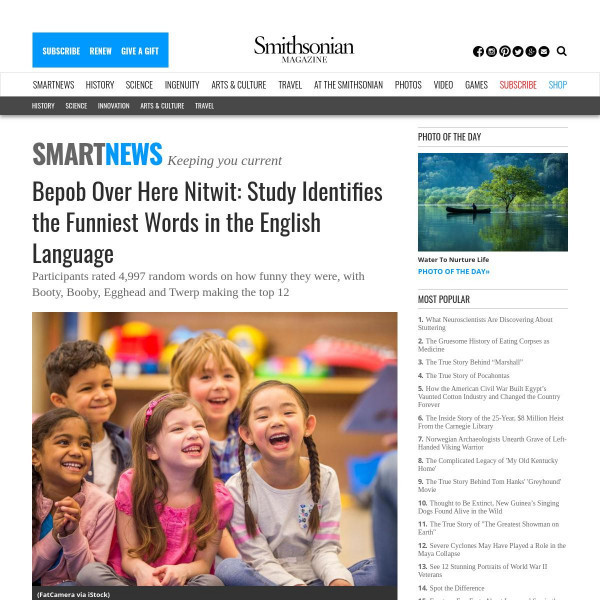