The Smithsonian Institution has a number of advisory groups. These museum boards and commissions, which include scholars and other interested private citizens, offer advice on programs, and budget and planning, and play a role in the ongoing evaluation of directors.

One of the key advisory boards to the Regents and the Secretary is the Smithsonian Institution Council. It is made up principally of people from the academic world, including Nobelists, artists, critics, museum directors, distinguished professors, media experts, philosophers and writers. The Council was created to review and debate topics embracing the entire Institution, including all of its units and interrelationships. Since I became Secretary, I have asked for Council review of three issues affecting the whole Institution. This column concerns Council advice on corporate partnerships.

As many of you will recall, I indicated at the beginning of my term that resources are a central problem for the Smithsonian Institution in this era. I predicted limitations on the growth of federal funding for new programs and the consequent need to increase revenues from other sources, one important one being corporate support.

In the past three years, corporate funding has been an important source of additional revenues for our educational efforts in research, exhibitions and national outreach. We're grateful for that help. Unlike in the past, however, corporations now ask more from us than simple acknowledgment of support. For instance, in return for a sponsor's giving to the Smithsonian a percentage of its product sales, or funding an activity or exhibition, the sponsor may ask to use the Institution logo in corporate advertising, identifying the company as "a proud supporter of the Smithsonian." There are many other examples, not the least of which have been the corporate presentations that accompany the "America's Smithsonian" exhibition.

Two of our sponsors made it clear at the Council meeting that the value of the Smithsonian to corporations lies in pairing our identity (or "brand") with that of a corporation ("co-branding"). In corporate eyes, our well-known identity bespeaks "American," "integrity," "familiarity," "family," "history," "technology," "art" and similar concepts. Given the new emphasis on marketing in corporate support, I sought the Smithsonian Council's perspective on the consequences to the Institution that might result from sponsorship rather than philanthropy. The Council discussion emphasized prudence in choosing corporate partners. Corporate identity can negatively affect the Smithsonian, especially in connection with questionable products (tobacco and alcohol, for instance), practices (such as providing substandard wages and working conditions) and occurrences (such as deleterious environmental events). And we must be able to sever relations if catastrophe occurs.

It also became clear that corporations that sponsor particular programs or exhibits are interested in the subject matter, but do not seek to affect specific content both as a matter of principle and to avoid debasing the independent reputation of the Smithsonian Institution, which is also important to them. This means that the corporate sector can be approached broadly for general Institution-wide support and more narrowly for targeted programs and exhibits. A number of corporations are more interested in our musical presentations, for instance, than in exhibits of objects and texts because they believe that their prospective customers will relate more closely to music.

Adamant critics of corporate sponsorships on the Council fear that the specificity of corporate interest will narrow the range of planned exhibitions and lead to self-censorship because of concerns that the Smithsonian "brand" might be less valuable to our sponsors. Most on the Council, and the Smithsonian Institution leadership, recognize these as potential problems but believe that treating corporate sponsorship as only one of a number of sources of support lessens the perceived threats.

On the broader issue, the Smithsonian already copes with strenuous critics in Congress, or people who enlist congressional support, whenever controversial programs are presented. Any corporate opposition is minor in this context. Corporations should be willing to accept the Institution's policy of not avoiding controversy but seeking a balanced presentation of subjects and ideas.

In general, we welcome corporate sponsorship opportunities, but we must review them carefully and maintain sensible oversight once we enter into contracts. We are grateful that a highly talented group of people dedicated to the welfare of the Institution devoted a two-day meeting to this topic, which is important not only to the Smithsonian but to museums throughout the United States.

By Secretary I. Michael Heyman 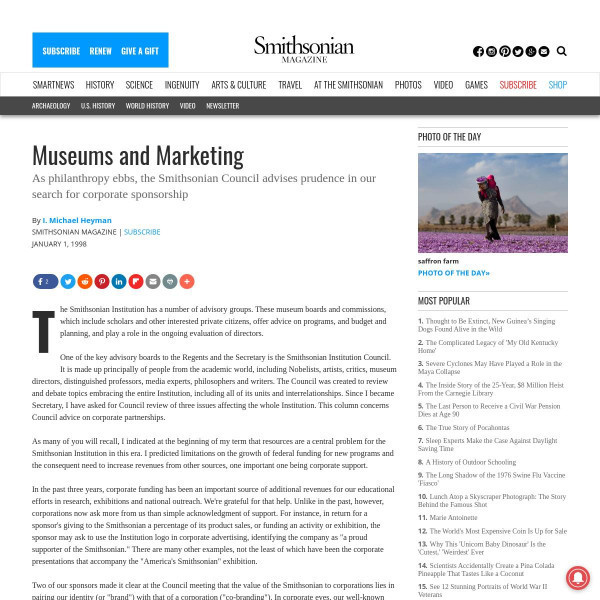