Change Author / Owner : The MERS Virus Has Been Detected in the U.S.

The virus behind the Middle East respiratory syndrome (MERS), a deadly coronavirus cousin of SARS and the common cold, has officially hit the United States. In Indiana, says the Centers for Disease Control and Prevention (CDC), a traveler from Saudi Arabia showed up at the emergency room with a fever and a shortness of breath; subsequent tests confirmed he was afflicted by the MERS virus.

The disease's arrival in the U.S. is worth paying attention to, but, at the same time, it's also not really a reason for most of us to worry.

MERS' close relationship to the virus that caused the deadly 2003 outbreak of Severe acute respiratory syndrome (SARS), an emergent disease that killed 800, means that health officials have been keeping a close watch on its spread ever since it was first spotted in Jordan in 2012. MERS is definitely dangerous, too: of the roughly 400 people who have shown MERS symptoms 100 have died, says the Associated Press.

But the specter of what MERS could become is scarier than what it actually is right now.

MERS is not particularly contagious, and the high death rate is only for people who are symptomatic. But even if someone gets the virus, it doesn't necessarily mean he or she will show symptoms. Knowing how the virus has spread among the healthy is harder to pin down. And, says the AP, “most deaths have been people already weakened by other health conditions.”

The patient in Indiana is getting better, and no one else seems to have picked it up off him, says the Toronto Star.

That MERS made it to the U.S. isn't surprising, either. Intercontinental flights make it easy for diseases to spread, much has MERS has to Europe and Asia.

So for now, for us folk not on the healthcare front lines, MERS is something to watch but not necessarily to get stressed out about. 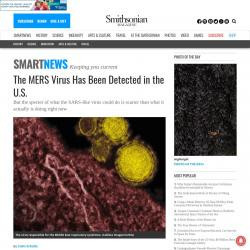