Change Author / Owner : This Clear, Flexible Electronic Circuit Can Fit on the Surface of a Contact Lens

Over the past few years, electronics have evolved way past the silicon wafer. Researchers have developed functional circuits that can meld with human tissue and dissolve when sprayed with water, and stretchable batteries that could soon power wearable gadgets.

Now, a group of Swiss scientists has revealed the latest in innovative electronics: a flexible, transparent circuit that is tiny and thin enough to fit on the surface of a contact lens.

The researchers put their new device on a contact lens as a proof-of-concept in a paper published today in Nature Communications—an electronically-enabled lens, they suggest, could be useful in monitoring the intraocular pressure of people with glaucoma, for instance—but they envision the circuitry someday being implanted in all sorts of biological contexts.

"I believe this technology can have important impacts in medicine and health monitoring," says lead author Giovanni Salvatore, a researcher at the Swiss Federal Institute of Technology. "It could be used for very wearable and minimally invasive devices, for ultralight solar cells, and most importantly, for very conformable and implantable devices which can serve to monitor biometric parameters in the human body."

The circuit's extreme flexibility allows it to be wrapped around human hairs and still function properly. (Image via Salvatore et. al.)

Creating the circuits—which are printed on a one-micrometer thick layer of a substance called parylene—is a multi-step process. To begin, the scientists deposit the parylene on vinyl polymer that provides support, then print the circuitry on top of the parylene. Afterward, the entire chip is placed in water, which dissolves the underlying polymer, leaving the ultra thin circuitry intact. The result is something that's about one-sixtieth as thick as a human hair.

This process, they say, confers a number of unique advantages. The circuit is extremely flexible, bending and crinkling to fit around, for instance, a hair, plant leaf or finger while still functioning properly. Because it's extremely lightweight, it could be feasibly used in a range of long-term medical applications.

After heart surgery, for instance, your doctor could someday prescribe you an implanted device similar to this one that monitors your the blood pressure in your aorta. Nearly-invisible environmental sensors could be deployed in an ecosystem to track levels of soil nutrients and pollutants, sending the data wirelessly to scientists' computers.

A larger print of the circuit prototype, shown wrapped around a finger. (Image via Salvatore et. al.)

All the same, it'll still be a few years before you see this sort of circuit popping up in commercial medical or environmental devices, as there are a number of hurdles before they can be practically implemented. Salvatore notes that his team isn't as far along in creating equally durable, flexible and lightweight versions of the other components crucial for a biomedical device (sensors and long-lasting batteries, to start).

Other research teams, however—most notably John Rogers' lab at the University of Illinois—are at work developing ultra thin LEDs, wireless antennas and solar cells that can be put to use. After that, they say, the next step is creating a system that transforms the varied individual devices into a cohesive network, transmitting data wirelessly and working in concert. 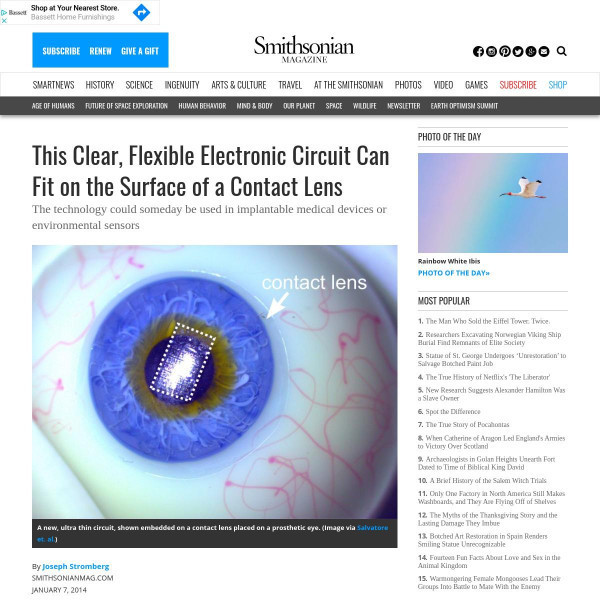