Why did you want to write this story now?

With the news coming in from Cuba over the last few months, I was thinking that Cuba's on the verge of a change. I came to Cuba from Ireland in January 1960, just after Castro came into power, in January 1959. Since then I've spent all my time in the U.S., but I'm very interested in Cuba, so I've observed how things have changed. Now it seems as if Castro's demise is imminent, or at least the demise of his influence and his reign. He was very visible for all these years, and now he's not. He's almost a ghost. So I thought this would be a perfect time to go down to Cuba.

The main thrust of the story is Hemingway, because when I think of Cuba I think of Hemingway. I went back to Cuba in 1999, and I was amazed at how alive the Hemingway legend was. It's was as if he were still walking the streets. To the people who have Hemingway in their hearts, which is a great many Cubans, he is still there and he belongs there. A lot of Cubans actually think he's a Cuban writer, born in Cuba. That's slightly amusing. Plus I think there's this sort of one-upmanship, thumbing the nose at the U.S. He lived in Cuba longer than in the U.S., he probably wrote more—maybe not better, but more. They are almost creating a Cuban Hemingway, which I found amusing and endearing.

Do they read his books in Cuba?

Well, here's the problem. Cuba is under communist rule, and this means that they don't pay for copyrights. They were lamenting to me, "Hemingway is taught in all the schools, but we can't get copies of his books in Cuba because they want us to pay money for the copyright, and we don't have any money." So I have a feeling there must be photocopies. At the Finca and the Journalists' Union, they asked me if I could bring copies in English and Spanish for their libraries. They didn't seem to have the latest copies of posthumous publications.

You mention in the story that the United States still restricts travel to Cuba. How did you get there?

I had to go slightly roundabout. I have an Irish passport. I went through Canada, and I took my brother with me. We're Irish, although I have an American passport too so I'm American too, but he's just Irish. The restriction is that a U.S. citizen or resident cannot spend money in Cuba, so technically he paid all the bills, and that covered me as far as the U.S. government was concerned. I also had to get a Cuban journalist's visa in order to do a story down there, and I got into a real tangle because I went down there on my Irish passport but the journalists' visa had been issued to my American passport. We sorted that out, but I tell you, these bureaucratic countries don't care who you are, what the name is, who you know. The two passport numbers didn't match, so I almost found myself on a plane back to Canada.

Did anyone get excited when they found out your name was Hemingway?

Some of the people did. The Cuban people were excited, but I think the tourists couldn't have cared less. I went to two different hotels in two different areas, and in both cases they gave me a huge bouquet of flowers the day before I was leaving each one. I think it was because when my brother made the reservations he just asked for two single rooms under his name. Then phone calls started coming in for Mrs. Hemingway.

Cuba has been living in a little time warp, so it's a peculiar place. It reminded me very much of growing up in Ireland in the '40s and '50s. That was after the War, and there were no goodies, food and travel were restricted. No one had a car when I was growing up—a car was the most exotic thing. This was just like going back into my childhood. Everything in the house has to last, because you can't just go out to the store and buy new things. And in some ways there's something nice about that, there's none of this urgency to run out to the store and stock up with a zillion things.

How did it feel being back at the Finca?

It's lovely to see the house preserved. They had just renovated it, and they're scrupulously trying to adhere to how the house was, so they bombarded me with questions about whether they were getting it right. They wanted to get to the nitty-gritty of the authentic Finca that Hemingway had lived in. They asked, "Was that chair in that corner?" When I was there chairs were moved around as needed. I tried to say, "It wasn't a museum then, it was a house, and in a house things get moved around." They asked, "Were his shoes there or there?" I remember Hemingway mostly went barefoot, and he would kick off his shoes, and then René, his valet, would put them away. He wasn't meticulous when it came to his clothes. Everything wasn't perfect. He wasn't the tidiest person. Things were always lying around.

It feels more like a museum since the renovation. I try to avoid going back to places, because I like to retain the memory, but when I went back in 1999 I expected Ernest to burst through the door and Mary to peer around the corner with her pruning shears and basket. And this time it was less so.

Do you reread the books?

I do. In 1998 I was going to the south of France, so I reread Garden of Eden. If I'm going to Paris I might reread A Moveable Feast. Going down to Cuba this time I reread Islands in the Stream. There are also other times when I'm interested in Spain, and I reread For Whom the Bell Tolls.

Had you read the books before you met him?

I'd just turned 19 the week before I met him. When I was 16 I had pilfered this book, Fiesta [called The Sun Also Rises in the United States]. Most of his work was banned in Ireland, and this one was definitely banned. Someone had given me Men Without Women, his book of short stories. And that was it. But I didn't know that he was a great writer. In Ireland we thought the greatest writers were Irish writers. (And of course James Joyce was banned too, so he wasn't among the writers that we read, except surreptitiously.) There was no American writer that we studied in school, it was thought that Americans didn't really have the hang of the English language, that they were too new to have written anything of consequence. It all seems funny now, but that was the attitude.

When you read the books now, do you read them as the work of Hemingway, the famous writer, or Ernest, the man you knew?

What was the most surprising thing about this trip?

I think the most surprising thing was how Hemingway is still so alive. There is such an affection for him. I don't know many writers that people actually think of them as a person 45 years after their death. 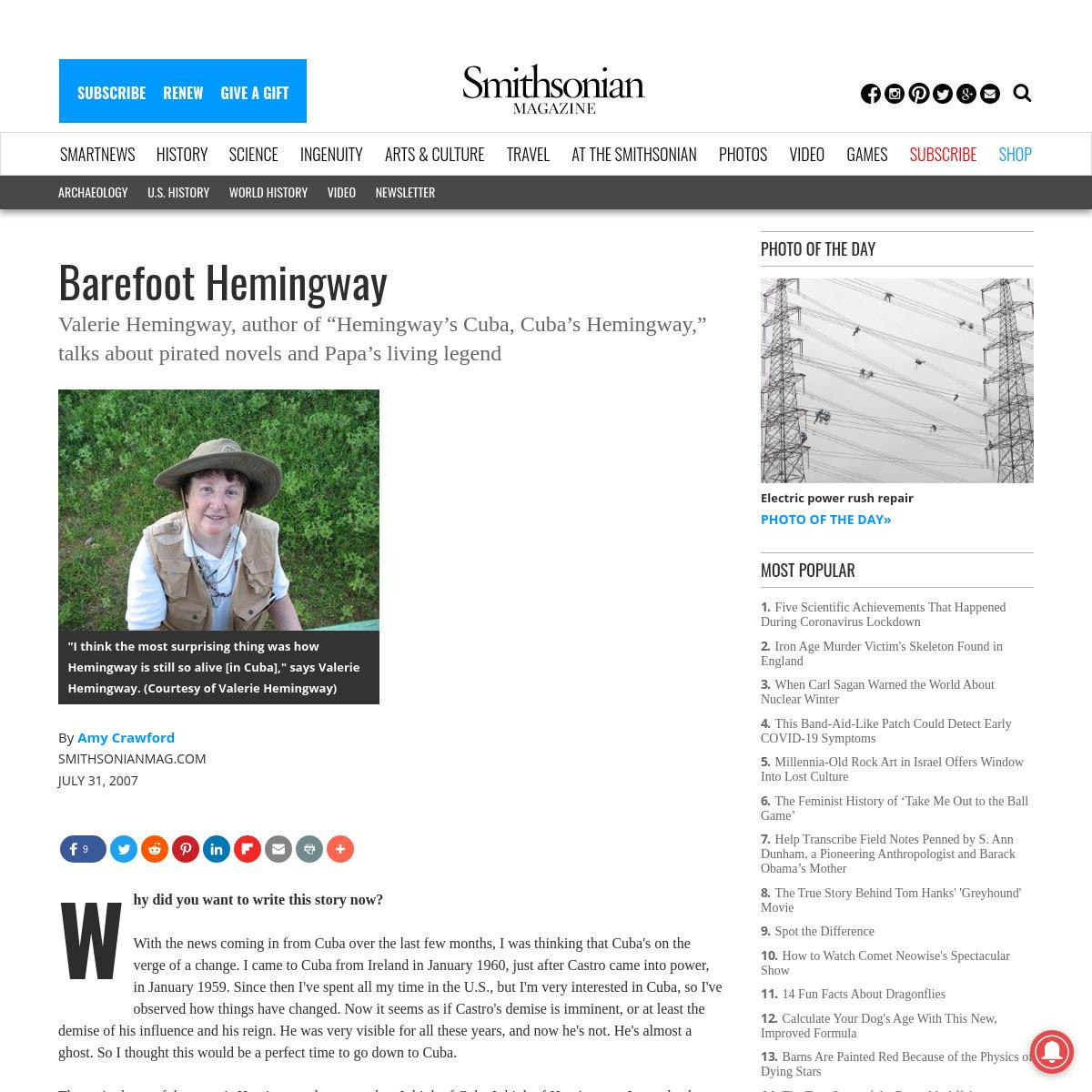