For billions of people, January 1—the traditional start of the New Year for those following the Gregorian calendar—is just a simple dress rehearsal. The fall of the Waterford crystal ball in Times Square, those earnest declarations of short-lived resolutions, Dick Clark's New Year’s Rockin' Eve, for many, these are not the hallmarks of a new year. The real festivities begin when, according to the lunisolar Chinese calendar, the new moon makes its appearance in the night sky, marking the start of the Chinese New Year. China and many other East Asian countries like Vietnam, Korea and Mongolia will celebrate the lunar New Year on February 18.

Chinese New Year, one of three, state-sanctioned "golden" weeks of holidays in China, is primarily a time for family reunion, prompting what will become the world’s largest human migration. Hundreds of millions of people in China, and hundreds of thousands elsewhere, hurry back to their hometowns for the celebrations. Many will camp out at terminals and stations in order to obtain a coveted ticket home on cramped buses, boats and trains. China's railways alone are expected to carry over 150 million people during the course of the 15-day festival.

The celebration stems from an ancient Chinese legend about a man-eating beast called Nian. To scare off the predatory creature, people covered their homes with the color red and filled the air with loud noises. Those very traditions led to the first New Year celebrations, which have continued for over 5,000 years. Observers today still paint parts of their homes red, hang red paper couplets expressing sentiments of wealth and happiness, and set off thousands of exploding firecrackers. Other traditions include the giving of red envelopes filled with money to children and unmarried adults, family-filled feasts of dumplings, chicken and fish and parades of dancing dragons and lions.

Every Chinese New Year is associated with one of the 12 animals found in the Chinese zodiac: the rat, ox, tiger, rabbit, dragon, snake, horse, sheep, monkey, rooster, dog and pig. One legend explains that in order to determine the order of the animals, the gods decided to hold a race across a river. Whoever finished first would be the head of the cycle. The clever rat won by jumping on the back of the ox, who was leading all the other animals. The pig was very lazy and finished last.

2007 is the Year of the Pig, or better yet, a "golden pig year" which only comes around every 60 years. A baby boom is expected to hit parts of Asia with many parents trying to conceive and give birth during the auspicious year. It is believed that a child born during this lucky time will have a happy and wealthy life. Countries like South Korea, suffering from low birth rates, are hoping to capitalize on the special occasion. Said South Korea health ministry official Shin Min-sik in recent news reports, "We hope this golden pig year will bring more babies."

One doesn't have to go abroad to participate in one of the biggest holidays in the world. Chinese New Year has made its presence felt in countries like the United States, where large populations of ethnic Chinese have made their home. The Chinese New Year Parade in San Francisco, originating in the 1860s during the California Gold Rush, is the largest celebration of its kind outside of Asia. Many Americans will gather to watch a parade featuring martial arts groups, stilt walkers, lion dancers and a 200-foot long, brightly colored dragon followed by an explosion of 600,000 firecrackers. Now who wouldn't want to celebrate New Year's all over again? 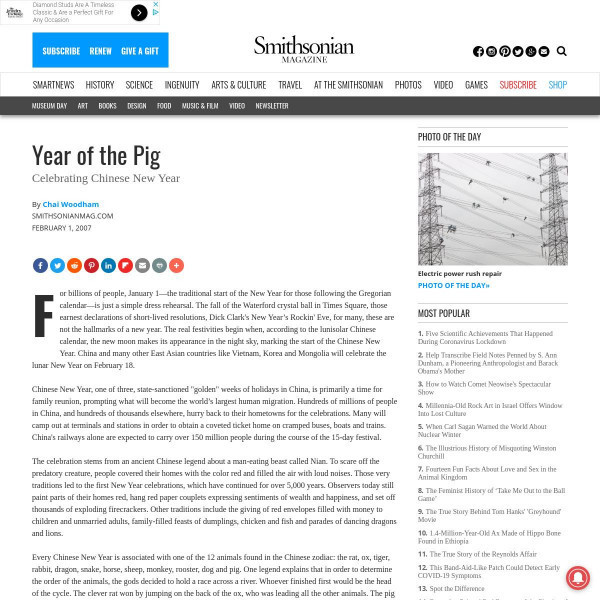