Two cyclists pedal an arduous section of the Mattole Road during the annual Tour of the Unknown Coast bike ride, which covers 97 miles of remote country immediately south of Eureka. Photo by Jason Barnes.

Cycling the West Coast is easy, whether you’re riding from Canada to Mexico or just Portland to San Francisco. There is not a tricky turn in a thousand miles, little chance of getting lost, virtually no risk of running out of food and always a secure place to sleep in the next state park campground, which awaits between 40 and 80 miles ahead and usually features a designated hiker/biker site at $5 a person. These campsites are often crammed with cyclists, many of them Japanese or German or Australian tourists, and many carrying one of a handful of guidebooks that describe almost every foot, vertical and horizontal, of the way. But is this world-renowned cycling route as awesome as it is popular? Perhaps the route is so popular only because it’s an obvious no-brainer—a one-way path without danger or adventure. Yes, there are tall redwoods and scenic views that draw tourists—and the north-to-south tailwind often blows like a dream. Still, I’ve made an effort to add some spice to this predictable and popular route by getting off it—and here are a few of the finest backroads that will take you into the California North Coast’s wilder corners, and through strange little communities that time and tourism forgot.

Mattole Road. Cyclists seeking peace, relief and respite after hundreds of miles of the harrowing traffic and multiple lanes of Highway 101 have an excellent opportunity to do so just south of Eureka, in Ferndale. This tiny village (can we say “village” outside of Europe?) consists of elaborate and esteemed Victorian architecture—but what you’re interested in now is the little paved road that exits via the back side of town and enters the rugged wilderness to the south: the Mattole Road. Those cyclists familiar with this long and winding sliver of asphalt will shiver at the name, but innocents like you and me may happily begin up (and I do mean up) it with not enough water or food. The road starts with a skyward ascent of about 1,800 feet. A few grumbling, dented pickup trucks and the odd glossy rental car are the only traffic to speak of, and you will be blissfully alone here. About 40 miles in you will find a county campground, though get a late start and you may have to improvise a bed place. When dusk was upon me, just six miles in, I asked permission at a ranch house to sleep in the pasture. Southward, the road continues, dropping to the beach before zigzagging back into the hills again, past communities like Cape Town and Petrolia. Several crossings and three-way intersections could draw you off track if you haven’t got a detailed map. One can cut the ride short by turning east onto the Bear River Ridge Road, which leads down to Rio Dell on Highway 101. Or in another scenario, you might wind up in Shelter Cove—a dreamy salmon fishing hamlet just north of the Lost Coast wilderness, itself a popular backpacking destination and among the few places in the state where you’re likely to find bear tracks on the beach. Assuming you skip Shelter Cove, the Mattole Road covers about 75 miles from Ferndale back to Highway 101 (and smack onto the “Avenue of the Giants” redwood corridor), plus about 9,000 feet of climbing—a tremendous ascent by any standards. To explore this area with full support and good company, consider joining the Tour of the Unknown Coast, an annual Mother’s Day ride that makes the painfully arduous Ferndale-to-Ferndale loop. The author, at about 2,000 feet above sea level, rolls along the Bear River Ridge Road, near its intersection with the Mattole Road. Photo by Alastair Bland.

Orr Springs-Comptche Road. Connecting Highway 1 at the smart and expensive seaside town of Mendocinoand the 101 corridor at Ukiah, a hot and grimy valley town of pickup trucks and strip malls, this winding, narrow road climbs 4,500 vertical feet from whichever direction you approach it and leads through some of Mendocino County’s most thrilling country. I pedaled this road from Ukiah westward and immediately started on a 2,000-foot climb straight up along an exposed road in the blazing sun. After several miles along a ridge top, the road drops into a canyon, where signs pointing into the woods to Orr Hot Springs may sound like the worst idea in the world when it’s 90 degrees in the shade. Deeper into the mountains and the thick forest, past wooden shacks, trailer shanties and old apple orchards, the country and culture feel as lost and forgotten as parts of Appalachia. Deep in these woods I encountered an ad hoc farmers market by the road, consisting of two tables and a small collection of local hill folk wearing homemade shawls and selling eggs, tomatoes, tamales and goat cheese. They told me this was the “Far East Comptche” farmers market (“We’re technically part of Ukiah, but we don’t like to use that word here,” they joked), held every Thursday from 4 to 7 p.m. Which reminded me of the time: It was 6—two hours from nightfall and 25 miles still to go to reach the Russian Gulch State Park campground. I raced on, up more steep grades and past more rural settlements unmarked on the most detailed maps. It was dusk when I hit the coast, and I still marvel that participants in the annual Mendocino Monster Century ride from Ukiah to Mendocino and back again—a 96-mile, one-day ride with 9,200 feet of climbing. Once through was plenty for me—not to say that this wasn’t one of the finest Northern California bicycling adventures I’ve had.

The author discovered this tiny farmers market in the deep backwoods along Orr Springs Road, halfway between Ukiah and Mendocino. Photo taken by resident of Far East Comptche/courtesy of Alastair Bland.

Highway 128. This route covers the Anderson Valley corridor, drained by the Navarro River and dense with apple orchards, vineyards and a few remaining stands of old-growth redwood trees. Though a highway itself, 128 is far quieter than the coast route or the 101 freeway, and there is a selection of road options that turn north or south off 128, if you really want to see the backwoods. Try Flynn Creek Road, Highway 253, the Philo-Greenwood Road, Mountain View Road or Mountain House Road—each a recipe for backcountry trailblazing through some of California’s roughest and most scenic terrain. If you stay on 128, you may wish to camp at Hendy Woods State Park—and don’t miss the Apple Farm, a self-serve fruit stand just across the bridge from the park entrance. Cold juice can be had by the glass out of the refrigerator ($1.50 for about a 12-ounce fill)—but if you want a bottle of cider, you’ll have to track down a person, as the hard stuff is kept locked indoors.

Stewarts Point Road. Supposedly one of the hardest bike rides in California, the Stewarts Point Road cuts inland from Highway 1 near Fort Ross and eventually drops you into the sophisticated wine country of the Alexander Valley, on Skaggs Springs Road. The cycling books don’t recommend this ride—but sporting cyclists with a taste for hills and adventures always do.

Highway 162. I’ve admired this one for years on my maps. From just north of Willits, Highway 162 goes eastward, through the cozy little community of Covelo and the Round Valley Indian Reservation. The road continues east, into the high mountains and no man’s land of the Mendocino National Forest and over the 5,006-foot Mendocino Pass before, eventually, allowing gravity to have its way and draw you down into the Central Valley—probably not the choicest place to be in the blazing heat of summer.

Alderpoint Road. This may be a hard route to drag yourself up. It takes you out of the cool and spectacular Avenue of the Giants and into the searing hot oak-and-madrone highland wilderness to the east. By the looks of my maps, you won’t find gas stations, or espresso houses, or wi-fi, or natural foods stores up here. Bring plenty of water—and good luck finding a place to sleep.

Know any other wild backroads worth recommending—in California or elsewhere? After climbing more than 3,000 feet in 35 miles, a cyclist can encounter few road signs more exciting than one like this, on the Orr Springs Road to Mendocino. Photo by Alastair Bland. 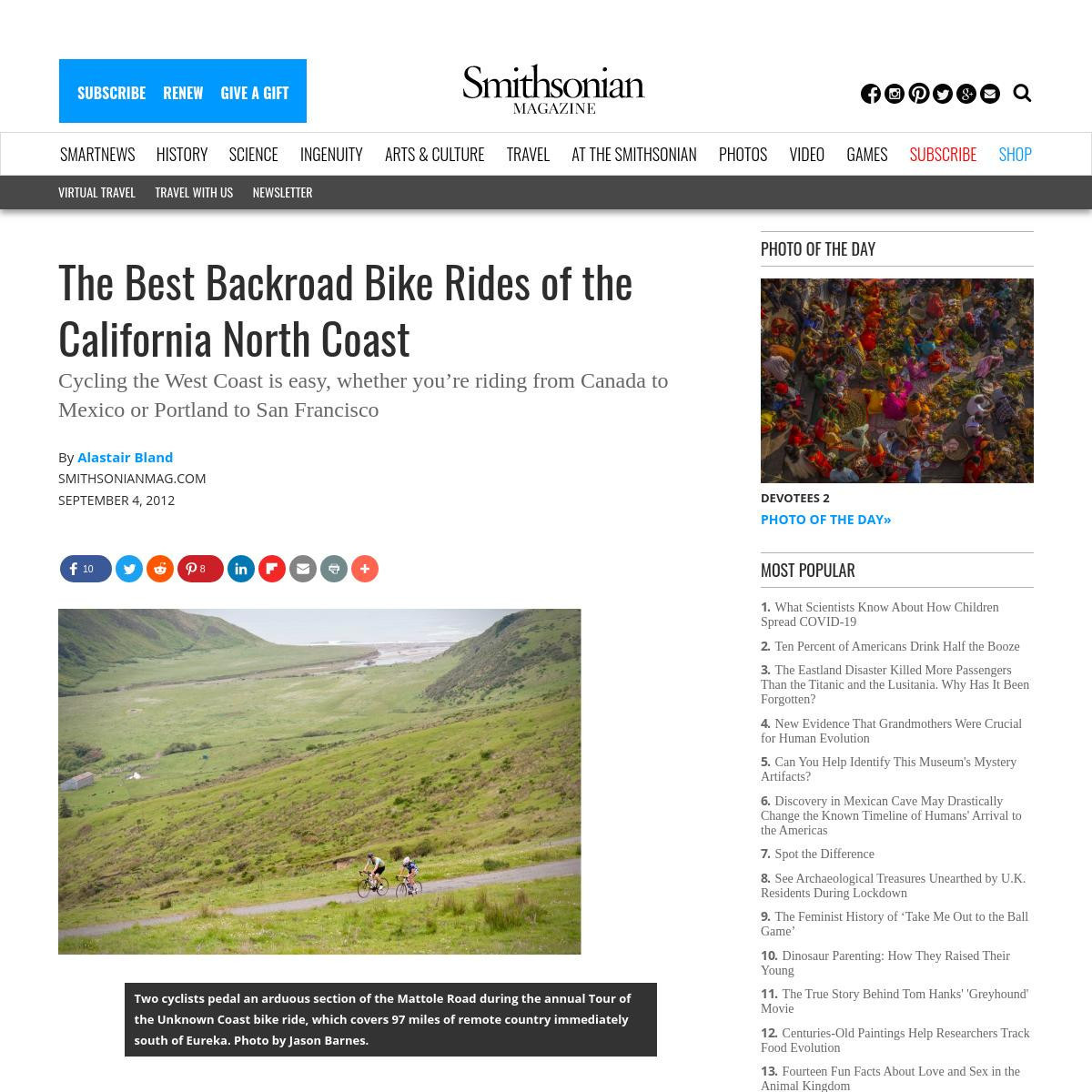 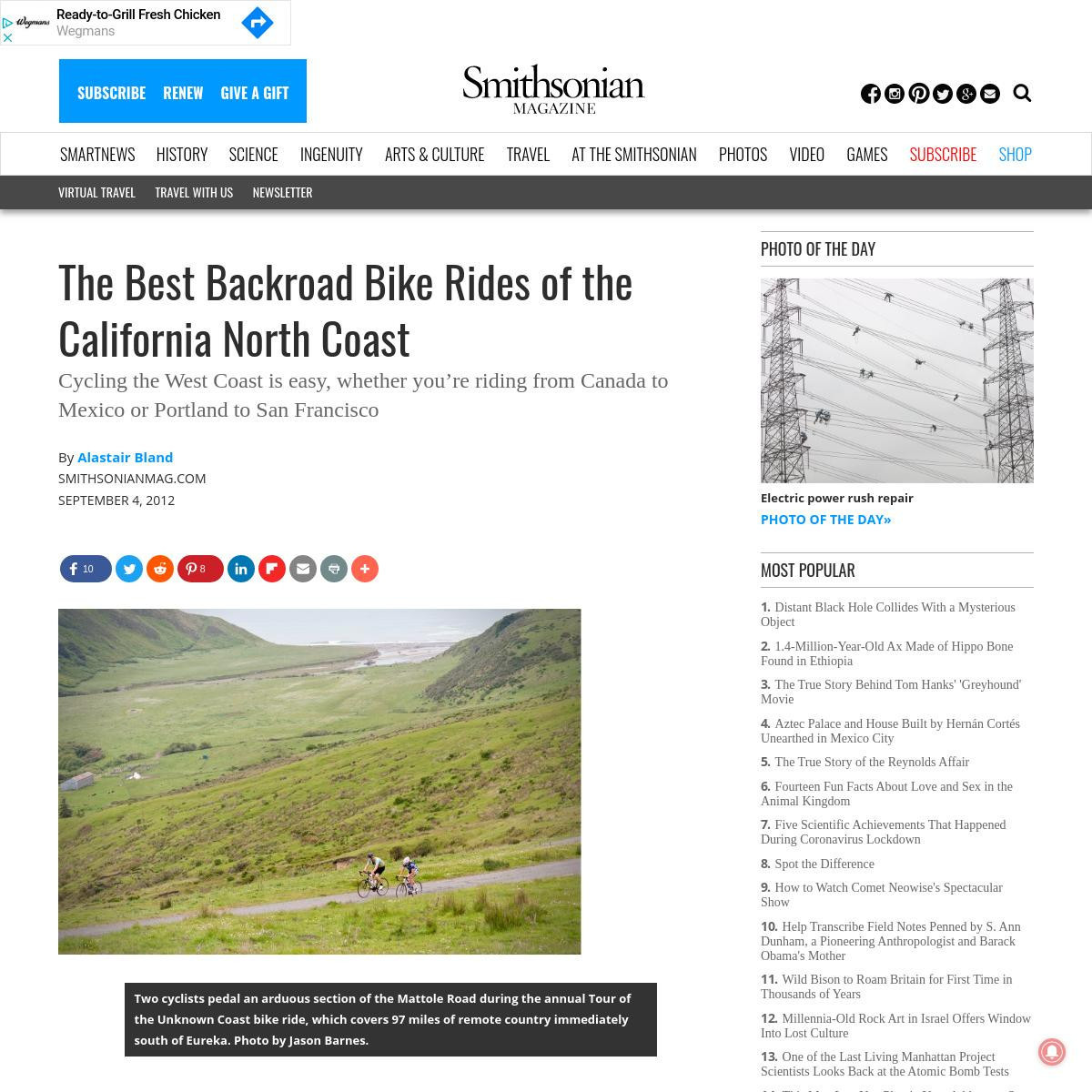