Change Author / Owner : Abused Animals in Connecticut Get Their Own Legal Advocates

Thousands of animal abuse charges are filed in the United States each year. But these cases are frequently low priority in courts and are either dismissed or not taken seriously. So the state of Connecticut is trying to make a change.

As Pat Eaton-Robb reports for the Associated Press, since the end of last year, the state can appoint legal advocates in the courtroom for animals that are abused or impaced by crime—similar to advocates appointed for victims or children. In the first six months since the law became active, advocates have been appointed in five case. And last week, for the first time, an advocate testified in court: Taylor Hansen, a law student at the University of Connecticut School of Law, testified in a dogfighting case alongside his professor Jessica Rubin.

“Every state has the problem of overburdened courts that understandably prioritize human cases over animal cases in allocating resources,” Rubin tells Eaton-Robb. “Here’s a way to help.”

The new piece of legislation establishing these rules is called “Desmond’s Law.” As Jordan Otero Sisson writes for The Hartford Courant, the legislation is named after an abused shelter dog that was starved, beaten and strangled to death in 2012 by his owner Alex Wullaert. Though the prosecutor suggested prison time, Wullaert was assigned to what's known as accelerated rehabilitation. As Sisson reports, this meant that after completing the program "his charges were dismissed and his record was wiped clean."

In fact, Sisson reports, only 20 percent of animal abuse cases in Connecticut are prosecuted, and when there is a conviction, the sentences are similarly light.

Now, there are currently eight approved advocates available (seven lawyers and a law school professor with her students) for animal cases, Eaton-Rob reports. And if a judge decides it is warranted, he or she can assign a legal advocate to work in the best interest of the animal. "[Advocates] can do investigative work prosecutors often don’t have time for, such as interviewing veterinarians and other witnesses," he writes. "They also make arguments, write briefs and make recommendations to the judge."

In the recent case in which the advocate testified in court, a pitbull covered in scars was found on the street and tracked to a home of Raabbi Ismail where two other dogs with signs of fighting were found. The creatures lived in an area full of dog feces and rotting food, and were in poor condition. One of them had to be euthanized, Eaton-Rob reports.

Hansen testified that animal abuse is often linked to abuse in humans and that the dogs' owner should not be allowed into the accelerated rehabilitation program. For example, one study in Chicago found that 65 percent of people arrested for animal abuse had also been involved in battery against people, Laurel Wamsley reports for NPR.

As Eaton-Rob writes, "[Judge Omar Williams] agreed the charges were serious. But after a 45-minute hearing, he found the crime was not on a list that would automatically prevent Ismail, who had never been arrested before, from participating in the program, known as Accelerated Rehabilitation." However, the judge did follow Hansen’s recommendation that the man be barred from owning, breeding or living with dogs for two years and perform 200 hours of community service.

While other states do not yet have a similar statutes, the field of animal law is growing, Wamsley reports. In 2000 only nine law schools had courses in the field but that number is now over 150. Apart from cruelty cases, animal law focuses on things like abuse of circus or performing animals and the welfare of farm animals.

Advocates of the law also point out that the move has national implications since the FBI now tracks animal cruelty convictions in its database, Sisson reports. "If there are no convictions or if they somehow get dismissed or annulled then, in a way, we're not helping the federal prerogatives that created the database," Julie Shamailova, another UConn law student working in the program tells Sisson. "What's the point of having a database for animal convictions if they're not getting convicted?" 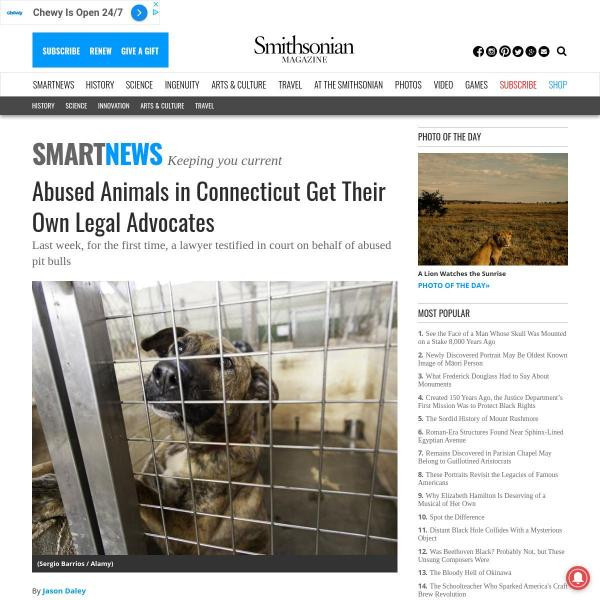