Great Books—and the Best Places to Read Them

About 10 years ago, while passing a hot afternoon on the deck of a tourist lodge in Belize, a friend on his way out to go bird-watching asked why on earth I had my nose buried in a book. “Here we are in the jungle of Belize,” he said. “There are jaguars in the woods, and crocodiles in the swamp, and grackles in the trees—and you’re reading a book?” I explained that reading while traveling—if done right—can serve as a sensory supplement to one’s surrounding environment, not necessarily a distraction, as he believed. I explained that many years from now, any mention of Dove—a sailing memoir by Robin Graham—would sweep me right back to these Belizean tropical forests where I read the book, and the coral reefs off the coast, and the croc-filled lagoons, and the villages, sulking in the boggy Caribbean heat and odors of fermenting cashew apples and mangoes. And I was right. When I think of Dove, I go right back to Belize. Because reading a book charges up the mind with information and memories. These become entangled with the scents and flavors of reality, and rather than detract from an experience, a good book can enrich it. Never in the past 15 years have I left home for a week or more without a piece or two of literature, and below I list some of my favorite reads—and where best to read them. Night of the Grizzlies

Montana, Night of the Grizzlies. On August 13, 1967, two different grizzly bears in two different parts of Glacier National Park attacked and killed two unrelated young women in one of the most bizarre stories of modern wilderness tragedy. Night of the Grizzlies, by Jack Olsen, recounts the events that led to the attacks. He describes the tourist lodges and the bear-viewing balconies above the garbage dumps, where grizzlies regularly gather—growing accustomed all the while to humans. When the victims—both 19, for another coincidence—go on their respective overnight trips into the backcountry, butterflies begin fluttering in the reader’s stomach. Night falls, the campers go to sleep and their fates are sealed; the worst nightmare of the human psyche is about to become reality. The deadly maulings were the first bear attacks in Glacier National Park, and Olsen’s book acknowledges the inexplicable nature of the coincidences of that night, then delves into the uncertain future of bears, people and wilderness. NOTE: You might lose sleep in the backcountry after reading this one—but that snapping tree branch outside was probably just the wind. Probably.

Paris, Down and Out in Paris and London. Ernest Hemingway may have spent his days in Paris thoughtfully fingering his beard at sidewalk cafes and drinking the house wine, but George Orwell voluntarily dived into a life of grim poverty as he made a journalistic effort to understand the plight of Europe’s working classes. In Down and Out in Paris and London, Orwell describes short-term jobs in the Parisian restaurant circuit, weeks of unemployment, living in a pay-by-the-week hotel and selling his clothes to scrape up the rent. He lives franc to franc, describing the logistics of saving coins and managing free meals and dodging the landlady. In one especially dismal spell, Orwell and a friend named Boris, living together at the time, go three days without food. Following false rumors of job openings, they drag their feet throughout the city, growing weaker every hour. Orwell even goes fishing in the Seine in the hopes of landing something to fry in a pan. When the pair finally acquires a loaf of bread and a bottle of wine, they devour what must be among the most satisfying dinners ever eaten in Paris. Orwell eventually lands steady work, but not before learning how strangely liberating it is to hit rock-bottom, to own nothing in the world but the clothes you’re wearing and have no worries but finding a bite to eat. T. S. Eliot, an editor at Faber & Faber at the time, would later decline the manuscript offered by the young writer: “We did find of very great interest,” Eliot wrote, “but I regret to say that it does not appear to me possible as a publishing venture.” Down and Out in Paris and London, by George Orwell.

Texas, Lonesome Dove. Author Larry McMurtry creates a lovable cast of characters in the cowboy era of Texas in this Pulitzer Prize winner of 1985. The year is 1876, and Gus and Call, a pair of retired Texas Rangers, now operate a cattle ranch by the Rio Grande and spend their days tracking rustlers and warring with bands of Comanche Indians. Just as the reader grows cozy with life on the farm, the prospect of joining a cross-continental cattle drive pulls Gus and Call from their idyllic home and on an adventure to Montana. Through dangerous encounters one after another, the men convince readers they’re invincible, but a tragedy ends the party, only one of the pair returns alive to Texas, and we remember that the American frontier is as brutal as it may be alluring.

Mediterranean Europe and the Middle East, The Innocents Abroad. In 1867, Mark Twain joined a group of wealthy Americans on a cruise ship bound for the Mediterranean—-and in one of his best-selling books he boldly makes a mockery of the most cherished sites and attractions of the Old World. No museum, ruin, impoverished village or biblical site is off-limits to Twain’s criticism. He ridicules, especially, the patriotic Italian guides who lead the group to famed statues and artifacts—such as a particularly dazzling sculpture of Christopher Columbus. “Well, what did he do?” they ask the tour guide (I’m paraphrasing), who had thought the Americans would be flabbergasted. “The great Christopher Colombo!” the guide stammers, incredulous. “He discover America!” “What? We’ve just come from there and we haven’t heard anything about him.” The Italian almost faints. And another hired guide shows them an Egyptian mummy, 3,000 years old. Twain and the boys stare in silence, stifling giggles for ten minutes, before one of them finally asks, “Is he, uh, dead?” Onward, in Greece, Twain sneaks into the Acropolis at night; in Turkey, he describes the “illustrious” stray dogs of Constantinople; in the Bible country, Twain mocks almost every artifact and scrap of cloth advertised as once belonging to Jesus—and only in the presence of the Egyptian sphinx is his teasing manner at last humbled. As he stares at one of the oldest creations of humankind, he likens the sight to how it must feel to finally encounter “the awful presence of God.”

Somewhere on the tropical ocean, Men Against the Sea. The sequel to Mutiny on the Bounty, this novella describes the voyage of the 19 men set adrift by the Bounty’s mutineers. The sailors locate themselves via celestial tracking, set themselves on a course for East Timor, and row more than 3,000 miles across the open ocean with only one man lost—killed by the hostile natives of Tofua. Hunger weakens the men nearly to starvation, but a few mahi mahi, flying fish and fruits harvested from island trees barely keep the men alive. The reader feels their hunger pains and likewise grows queasy each time they must make a landing to find water, surfing their boat over tremendous breakers onto unfriendly shores, often astir with threatening people. The men observe strange hopping animals as big as a man in the vicinity of Australia, and beneath their boat the shapes of monsters appear as fleeting shadows—probably the fearsome estuarine crocodiles so infamous in Australian swamps today. NOTE: If you’re reading aboard a boat at sea or under a palm on a tropical atoll, the aforementioned Dove can stand in ably. Central America, The Mosquito Coast. In Paul Theroux’s novel about a brilliant but wayward man who transplants his family to the upstream wilderness of Nicaragua, protagonist Allie Fox builds a self-sufficient paradise—but in the metaphor of Conrad’s Heart of Darkness, the protagonist loses his mind, and the dream goes up in flames.

California, My Name Is Aram. From William Saroyan, this 1940 novel hashes out the comedy and drama of life in the farm country of the San Joaquin Valley, where the Saroyan family, from Armenia and still embracing customs of the home country, have set new roots.

Baja California, Log from the Sea of Cortez. John Steinbeck’s travelogue from the scientific collecting voyage he joined in 1940, aboard the Western Flyer, describes the rich Sea of Cortez and the shoreline of the Baja Peninsula. In 2004, several Stanford marine biologists re-enacted the voyage on a vessel almost identical to the original. En route, the scientists compared Steinbeck’s descriptions of a bountiful sea with the dwindling fish and invertebrate populations of the present.

Southeast Asia, Catfish and Mandala. In this travel memoir, Andrew Pham tells of his pilgrimage by bicycle from his home in the San Francisco Bay Area to the land of his roots, Vietnam. Here, Pham seeks out old friends and familiar places, but haven’t we all been warned never to go home again? Indeed, much of the world that Pham hopes to see again has vanished or transformed.

Finally, the brand-new guidebook Oregon Cycling Sojourner, by Ellee Thalheimer, provides local insight and tips helpful for anyone considering riding a bicycle through Oregon—and camping, dining out, drinking beer and even doing yoga along the way. The glossy paperback details eight routes through all regions of the state, covering 1,826 miles of highway, 12 breweries and 14 mountain passes. Those not wishing to have a tour route described down to the turns in the very road might read the book for pointers, take a few notes, then leave it behind and wend their own way.

Have any more book suggestions? Add any ideas to the comment box below, as this list continues next week.

Best of Lists Description and travel Off the Road Blogs Articles 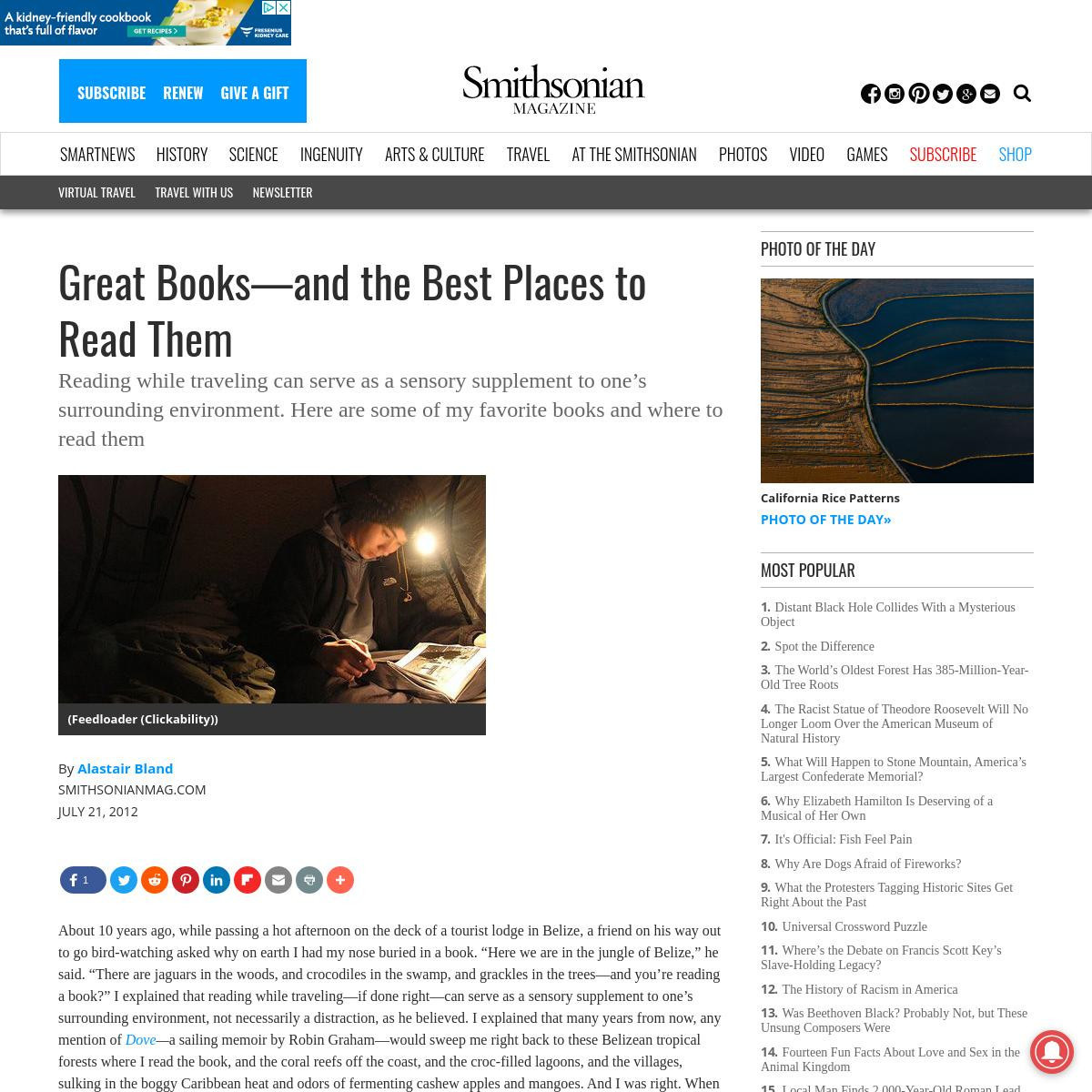