Charles "Chuck" Harrison designed some 600 household products—everything from blenders to baby cribs, hair dryers to hedge clippers—over his 32-years as an industrial designer for Sears, Roebuck & Company. He spoke with the magazine's Megan Gambino.

How did your parents influence you in your pursuit of art and specifically industrial design?
I think my mother probably planted a seed aesthetically for me to recognize beauty in simple things like flowers, plants and colors. She would enlist me to help her with her making of the house, putting pictures up, selecting pictures and arranging furniture and stuff. I think from my father I gained quite an appetite for creativity, for building things. He was fundamentally a carpenter although he taught industrial arts at a university. I acquired quite a fascination from seeing things grow from nothing to something. We came from very, very modest means, so he built most of the things we had in our house, like our furniture. He built a lot of our toys, and I participated in all that kind of stuff. We built sheds, barns, coops and things, even houses.

I spent hours and hours building model airplanes and actually flying them. Then I had erector sets, where I would build different kind of structures and mechanisms and make powered things move and lift. I built a boat once—took it out to the pond, put it in there and it sank with me. That's how you learn [laughs].

You say you have always had trouble reading. Did you find that that steered you towards arts and working with images?
I'm certain that directed me to find another way of communicating. Instead of trying to read signs and things, which I couldn't do quickly, I'd look at locations or symbols, houses or buildings to find my way. I was almost completely through college before I really discovered the name for my problem. The issue I had was dyslexia. But I somehow made a way through it, just through pure determination and maybe fear of failure [laughs].

What skills did you learn at the School of the Art Institute of Chicago?
I just had to really learn to draw and take a concept, something that didn't exist except in my mind, and communicate that to other people who would pick up this product along the production floor some place and make it a real product. It was sketching, 3-dimensional drawing like perspective drawing and rendering, which is shading and making images to show what a product will be one day. Then I had to learn to do detailed drawing, make blue prints of the drawings so it could be passed on to engineering and model makers.

Before joining Sears' staff, you re-designed the popular View-Master. How did you better that product?
My job was to adapt it to another manufacturing process so that it could be made less expensive, made a lot faster, reduce the costs, put it into an updated form so that it would be more appealing, and essentially, that's what I contributed to it. As a consequence, it just happened to hit America at a time when it did a magical thing. It was low cost enough when I got done with it that they could buy it for children and let them play with it. They put these disks in with stories and they were attractive to children – fairy tales, comic and Disney characters.

Did the anonymity of making products with other companies names on them ever frustrate you?
No, never did. In fact, that's just par for the course. Besides, I needed a weekly paycheck before I needed recognition. Now some design people do have their names [on products], but they are high profile people, probably not even designers. That's a marketing technique used to get American people to buy products. They think if they buy a baseball bat that has Ted Williams on it, they're going to hit a home run. That's hocus, pocus kind of stuff. I really just wanted to do what I do, and do it as well as I could.

How would you say industrial design has changed in the some 50 years you've been involved with it?
The designer's point of view has changed; the proportion of interest in a product is less aesthetics than it was the years in the past and more marketing and perhaps technology driven than it used to be. If you think of things as a triangle and one leg of a triangle, it was not an equilateral triangle when I came in. The long side of the triangle was aesthetics, and then there were two short sides, which were business and science. That was the composition of a designer's approach in those days, but now it's more equilateral. His or her concern is as strong in the business and sciences as it is in the arts.

What advice do you have for industrial designers today?
That this is a much more serious profession than it looks like on the surface. What designers do will affect so many people, many more people than you can imagine during the lifetime of that product. They should take that charge very seriously, about what they are putting out there for other people to have in their possession and in their lives and may even be passed on down through generations. It should obviously be safe, do what it is supposed to do, be pleasing to have in your environment and certainly be of value. 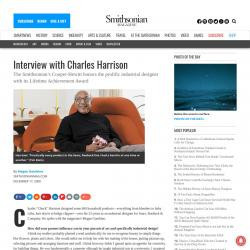