Researchers Say Culling Koalas May Save Them From Chlamydia

Koalas may be on the road to recovery after nearly being wiped out at the beginning of the 20th century, but it’s not all sun-drenched naps and eucalyptus chow for the furry marsupials. Over the last few years, tens of thousands of Australia’s koalas have been struck by a devastating strain of chlamydia that is painful and often fatal for the struggling species. Now, some researchers say the koala’s best hope of survival might be a controversial one: controlled culling.

In humans, chlamydia is a relatively common sexually-transmitted infection that, if caught early, is easily cured through antibiotics. But for koalas, it’s a different story. Once infected with chlamydia, koalas can go blind, become infertile, and can develop a painful, debilitating infection known as “dirty tail”—a condition that infects the urinary tract and is often fatal, Katie Silver reports for the BBC.

“About half the koalas across Australia are infected,” David Wilson, an epidemiologist with Melbourne’s Burnet Institute, tells Silver. “In closed populations, the majority can be infected—sometimes up to 80%.”

While chlamydia in koalas can be treated with antibiotics, many of the animals are too badly infected for the treatments to help them recover. At the same time, many koalas are also being infected with a retrovirus like HIV that could make the chlamydia infections worse. Even if researchers were to administer antibiotics, they would have to round up koalas on an enormous scale in order to have any hope at stemming the epidemic, Wilson tells Bridget Brennan for the Australian Broadcasting Corporation.

There’s also the problem of the antibiotics’ own side effects. “Koalas have a gut full of bacteria that is essential to digest eucalyptus leaves,” Queensland University of Technology microbiologist Peter Timms tells Silver. “So if you’re giving them systematic antibiotics, it is actually killing this.”

Wilson argues that a controlled cull of the most severely diseased individuals could help stop the epidemic by getting rid of animals that would die anyway before they can infect others. Though killing koalas to save the species may sound paradoxical, if a strategic cull began now Wilson says that within 5 to 10 years researchers could begin seeing koala populations razed by chlamydia begin to bounce back, Brennan reports.

Culling is a controversial practice, but it’s not unheard of. There are currently plans to cull about 2 million feral cats in parts of Australia in order to protect native, endangered animals, and in the early 2000’s researchers experimented with culling Tasmanian Devil populations in order to try and stem the spread of a transmissible strain of facial cancer, although Wilson says that program was unsuccessful due to poor management.

Wildlife lecturer Desley Whisson,  from Deakin University, tells Brennan that while she agrees with Wilson’s culling proposal, it will be tough to sell to the government and the Australian public. "At the national level culling is not permitted for any reason for koalas so it would have to be a turnaround in the thinking at the Commonwealth level for that to be allowed," she tells Brennan.

For now, Wilson is working on hopes that authorities will allow tests of culling infected koalas in parts of Queensland and New South Wales to see if it can help stop the chlamydia epidemic.

"To kill koalas, of course there is going to be a reaction," Wilson tells Brennan. "They're just lucky they're cute and so we don't want to do something like that but I'm here trying to save the koalas.” 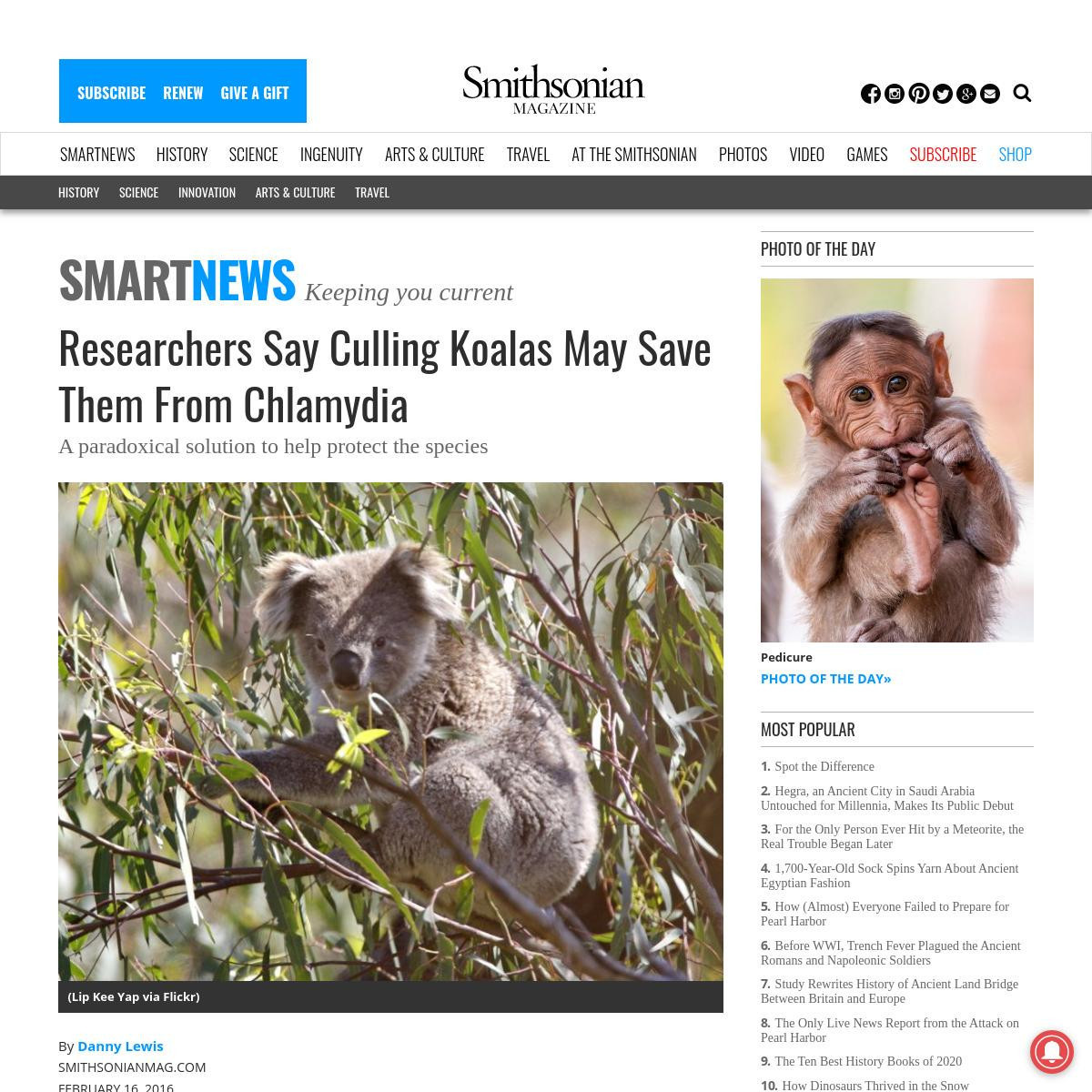