Bennington Battle Monument (Old Bennington)
The tallest structure in Vermont commemorates the Battle of Bennington, a battle that led to the turning point in the Revolutionary War. In the late summer of 1777, the Continental Army beat a hasty retreat toward Bennington. British and Hessians pursued but were badly in need of supplies.

The colonists, carrying what is believed to be the first American flag into battle, defeated them before they could reach the supply depot at Bennington. The British were forced to proceed to Saratoga without the supplies, where they met a stunning defeat that turned the tide of the Revolutionary War. Today, visitors may ride an elevator to the top of the Bennington Monument for panoramic views of the valleys and rolling hills of Vermont, Massachusetts and New York. Open daily, mid-April through October 31.

Chimney Point State Historic Site (Addison)
For more than 7,500 years, the shoreline known as Chimney Point has been a strategic settlement for peoples occupying the Champlain Valley. Native tribes camped here as they hunted and fished their way up and down the waterway, and it became an important stop for traders. In the early 1730s, the French settled the area with grand visions of expanding the territory of New France. Near the end of the French and Indian War, French settlers torched and fled the site. The only things standing where charred chimneys, which inspired the Point’s name. Chimney Point’s 18th-century tavern now houses an interpretative exhibit titled "People of the New Dawn and the People of New France." Open late May through mid-October, Wednesday through Sunday.

Covered Bridges
More than any other state, Vermont is known for its covered bridges. A total of 106 bridges remain, the roofs and walls continuing to protect the wooden trusses from rot and decay.

The Hubbardton Battlefield (Hubbardton)
The Battle of Hubbardton was the only battle of the American Revolution which took place entirely on Vermont soil. Constructed in 1970, the Visitors Reception Center houses a museum. An interpretive exhibit with period artifacts places the battle in its Revolutionary War context. A three-dimensional fiber optic map details the various phases of the Battle. A diorama of the Battle, constructed by Vermont artist Paul V. Winters, is on display. This fine creative work shows the Battle of Hubbardton in its furious early stages. Open late May through mid-October, Wednesday through Sunday.

Old Constitution House (Windsor)
Less than a year after the signing of the Declaration of Independence, another new Republic was taking shape. Delegates from the newly independent Republic of Vermont gathered at the tavern in Windsor to draft a constitution. Called the "Birthplace of Vermont," the restored Old Constitution House looks as it did more than 200 years ago. Open late May through mid-October, Wednesday through Sunday.

President Calvin Coolidge State Historic Site (Plymouth Notch)
Unique in American history, Calvin Coolidge was sworn in as President by his father, a local notary public, at his boyhood home on August 3, 1923, following the death of Warren Harding. Today, the homestead remains exactly as it was the night Coolidge took office. Open daily late May through mid-October.

President Chester A. Arthur State Historic Site (Fairfield)
In 1881, Vermonter Chester Alan Arthur was sworn in as the nation’s 21st president. The son of an impoverished Baptist minister, Arthur was born in a small temporary parsonage. A visit to the reconstructed homestead offers a pictorial portrayal of Arthur’s life and political career. Open late May through mid-October, Wednesday through Sunday.

Underwater Historic Preserves (Lake Champlain)
Not all history happens on land. Lake Champlain, one of the nation’s most historic waterways, contains countless shipwrecks dating back to the 1700s. These wrecks include military, commercial and private vessels—each providing a direct connection to the past. Today, the state maintains five underwater historic sites for scuba divers—the Horse Ferry, the Phoenix, the Coal Barge, the General Butler and the Diamond Island Stone Boat. Each preserve is marked by yellow buoys with guidelines providing safe and easy access to the wrecks.

Under the 1975 Vermont Historic Preservation Act, all underwater historic sites beneath state waters belong in public trust to the people of the State of Vermont. The state's responsibility is to protect, wisely manage and interpret this public heritage. Establishing a preserve is one way to accomplish these goals by making it easy for divers to safely locate historic wreck sites, by protecting the wrecks from accidental anchor damage, and by helping you to understand the life and history of each wreck. 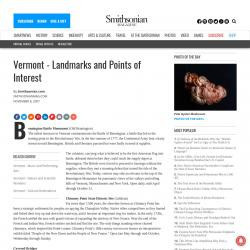