What do you see when you look at these images? Microscopic cells, cross-sections of bones, blood vessels—these biological structures all spring to mind. All of those guesses would be wrong.

At first glance the work of Australian generative artist Jonathan McCabe might look like biological specimen stained with some psychedelic chemicals for effect, but it’s not biology. He created all of these images using computer algorithms based on a little-known biological theory of how cells randomly grow into patterns and form order amid chaos.

But, before we delve into theoretical biology, what exactly is generative art?

Generative artwork is made with the help of some sort of outside system (usually a computer program or algorithm, but chemical reactions would work too) that processes and transforms initial inputs. Those inputs can be visual, statistical, or even musical—they could be food left to rot, creating delicate rings of mold, or even an artificial DNA code used to construct 3D models of cities. And one system can produce a lot of different end products.

Taking part of the creation of the art out of the artist’s total control introduces an element of surprise. “Generative art can be addictive, with the promise that something good will turn up, given enough tinkering with the process,” says McCabe. Artists focus on the output and tinker with algorithms to get the end product that satisfies them—aesthetically, mentally, artistically, etc.

Since 2009, McCabe has been tinkering with algorithms based on a biological theory proposed by computer scientist and mathematician Alan Turing. Though better known for his work on artificial intelligence and for cracking the German Enigma coding machine, Turing also had an interest in patterns that govern the natural world. In 1952, he published a paper entitled “The Chemical Basis of Morphogenesis,” in which he posited that chemical substances (called “morphogens”) react with each other and spread through tissue to create naturally occurring patterns in organisms made up of thousands, perhaps billions of cells.

Turing came up with a basic model of how such natural patterns work. A cell produces chemicals, and those chemicals react and diffuse into their environment of neighboring cells. There’s a compound that activates the reaction, and one that shuts it down, an “inhibitor.” Depending on the concentration of the “activator” chemical in each cell, you might get a spot or a stripe as the reaction diffuses across tissue—the larger the area, the more complex the pattern. Turing devised mathematical formulas to predict how six patterns might form in a small sphere of cells.

It’s easy to see how such a basic process could underpin pigment patters in animal skin and scales, creating a cacophony of spots and stripes. Researchers have modeled Turing patterns in seashells, fish eyes, and slime mold, and have even shown that Turing’s theory explains the evolution of leopard spots with age.

Some extend Turing’s equations to three-dimensional patterns, too, for example those found in tooth spacing and limb development. In 2011, a team provided experimental evidence that the ridges in a mouse’s mouth formed according to Turing’s theory. (Chemists at Brandeis University also published a study in March using Turing formulas to make 3D structures in test tubes, too.)

Because McCabe spends his own days devising algorithms to create art, he was aware of Turing’s work. When he started seeing the characteristic spots and stripes of Turing patterns pop up in his generative artwork, he decided to play around with his code. “I guessed that the Turing patterns were appearing accidentally,” says McCabe. So, naturally, he tried to make them on purpose.

Turing’s work is a natural tool for generative art. To mimic a chemical system, McCabe devised programs governed by the same principles to produce images—using pixels in place of cells. The program randomly assigns a number to each pixel, which produces a color. Just as the chemical reaction in one cell influences its neighbors, the number for each pixel changes based on the surrounding pixels. “I had seen pictures of animals, particularly lizards and fishes, which had quite beautiful patterns on their bodies, so that was the inspiration,” he explains.

McCabe’s first imaging experiments were quite basic: black and white dots and maze-like patterns. Eventually, by layering two or three or more Turing processes on top of each other he could create more complex patterns—large stripes comprised of small dots or swirls and a rainbow of colors form a larger picture. These are called multi-scale Turing patterns, and McCabe has graduated to creating them on a large scale. Zooming into one of these large images is almost like peering into a network of living cells.

The beauty of generative art is that you never know exactly what you’ll get. Depending on what he likes or doesn’t like about the end product, he’ll tweak an algorithm or combine pieces of different algorithms. “Sometimes I use genetic algorithms where I have the program randomly combine parts of 'recipes,' which have led to good outputs, doing a sort of selective breeding,” says McCabe.

Many of the images look like iridescent fish or lizard scales, animal hide, blood vessels, or even stained tissue samples. McCabe has even combined them with algorithms that mimic the physics of flowing fluid to create ocean-like landscapes.

But he never makes an image with a specific natural form in mind, nor does he title his work. That leaves them open to interpretation. Do you see a plant cell or a turtle shell? Ultimately, McCabe figures that what you see is up to you. 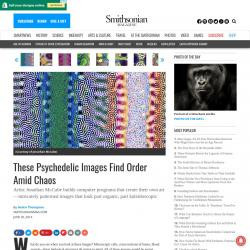