It’s Not a Health Hazard to Have Sushi Made With Bare Hands, It’s a Necessity
Description

A slice. A dab of wasabi. A gentle press and a flip followed by slow, firm squeezes as fish and rice come together in a piece of nigirizushi. The word “nigiri” in nigirizushi means to “grip,” “grasp,” or “hold.” The beautiful hands of the chef holding sushi radiate confidence and move with grace and precision. They have survived cuts and burns. Hours of relentless repetition have drilled and hammered the tactile memories of fish and rice into every nerve ending of every fingertip. Knowledge, skill, and intuition have been programmed into those hands, the chef’s most valuable tools and his medium for creativity.

A California food safety law that was put into effect at the beginning of the year effectively silenced the hands of sushi chefs by requiring food workers to wear gloves while handling “ready-to-eat” food. Pending approval by the California State Senate, this provision of the law will be repealed, eliciting a big sigh of relief from sushi chefs and sushi aficionados alike. The law, which was intended to prevent the spread of foodborne illnesses, caused great disruption in sushi chefs’ routines. It changed the way they held their knives, filleted their fish, and prepared each piece of fish. Many of the chefs at the Los Angeles sushi restaurants I used to frequent felt as if they had lost their voice, for it was through their hands that they communicated with their fish, and ultimately, their hungry and loyal customers. Even the sushi chefs in Tokyo, the city I now call my home, were saddened by this news.

Sushi is a simple concept—fish and rice. Yet it is also history, anatomy and anthropology in culinary form. Each perfectly constructed piece tells a unique story. A translucent slice of flounder is gently draped over vinegared rice and presented on a lacquered plate. That flounder, which has acquired a few extra pounds of fat while traveling through the cold winter seas, glides over your tongue like satin and opens up to a bouquet of elegant flavors.

Running along the curvature of a line-caught sea bream, the sushi chef’s fingertips see everything: fat distribution, water content, muscle thickness. Depending on what he feels, he may decide to let the fish age for a few days, to let flavors come to life and textures mature. He may cure the fish between two strips of kombu, using the kelp to coax out water from the flesh while simultaneously infusing it with umami. Those fingertips will know the exact minute when the fish has been aged or cured to perfection—no more and no less.

Kawahiki (removing the skin), oroshi (filleting), honenuki (removing the bones), sujime (marinating in vinegar). Each laborious step of preparation is a testament to a chef’s precision and attention. No item tests a chef’s skills more transparently than kohada—gizzard shad. This small, silver-skinned fish must be swiftly filleted, deboned, salt-cured then vinegar-marinated. Marinate it for too long, and the vinegar will overpower the fish, the skin will lose its silver luster, and the flesh will fall apart. Not enough marinade or salt cure, and the finicky fish will instantly spoil and lose its magic. Every step is meticulously quality- controlled and calculated by a chef’s fingertips—he feels for a particular bounce and give in its texture—and must also be adjusted to that day’s humidity and temperature.

But the true test for sushi is in the shari—the rice. Chefs and diners all agree that the majority of flavor is determined by the shari, and the rest by the fish. When the chef makes the nigiri, he will use his fingertips to weigh out the optimal amount of rice for each piece— slightly less for squid and scallop, and slightly more for those with a stronger flavor profile like kohada.

A seasoned chef will even manipulate the orientation and position of rice grains when making the nigiri, and may even be able to tell the exact number of rice grains in his hand. When the air pockets are evenly distributed between each uniformly aligned grain, the rice and the fish perfectly meld together for an optimal balance of texture and flavor.

The simplicity of sushi makes each piece vulnerable to even the most minute adjustments and subtle differences. Our emotional and physical states affect the way that we feel with our fingertips, express through our hands, and relate to our environment. To cover those hands with gloves—whether they belong to a sculptor, a dancer, a violinist, or a sushi chef—is to take away a mode of expressing love, adoration, and respect for craft. Perhaps it even takes away these artists’ very reason for being. I’m glad that California has decided this experience is worth saving.

Tomoko Kurokawa is a doctor, food writer and world traveler who lives in Tokyo, Japan with a second home in Los Angeles. She wrote this for Zocalo Public Square. 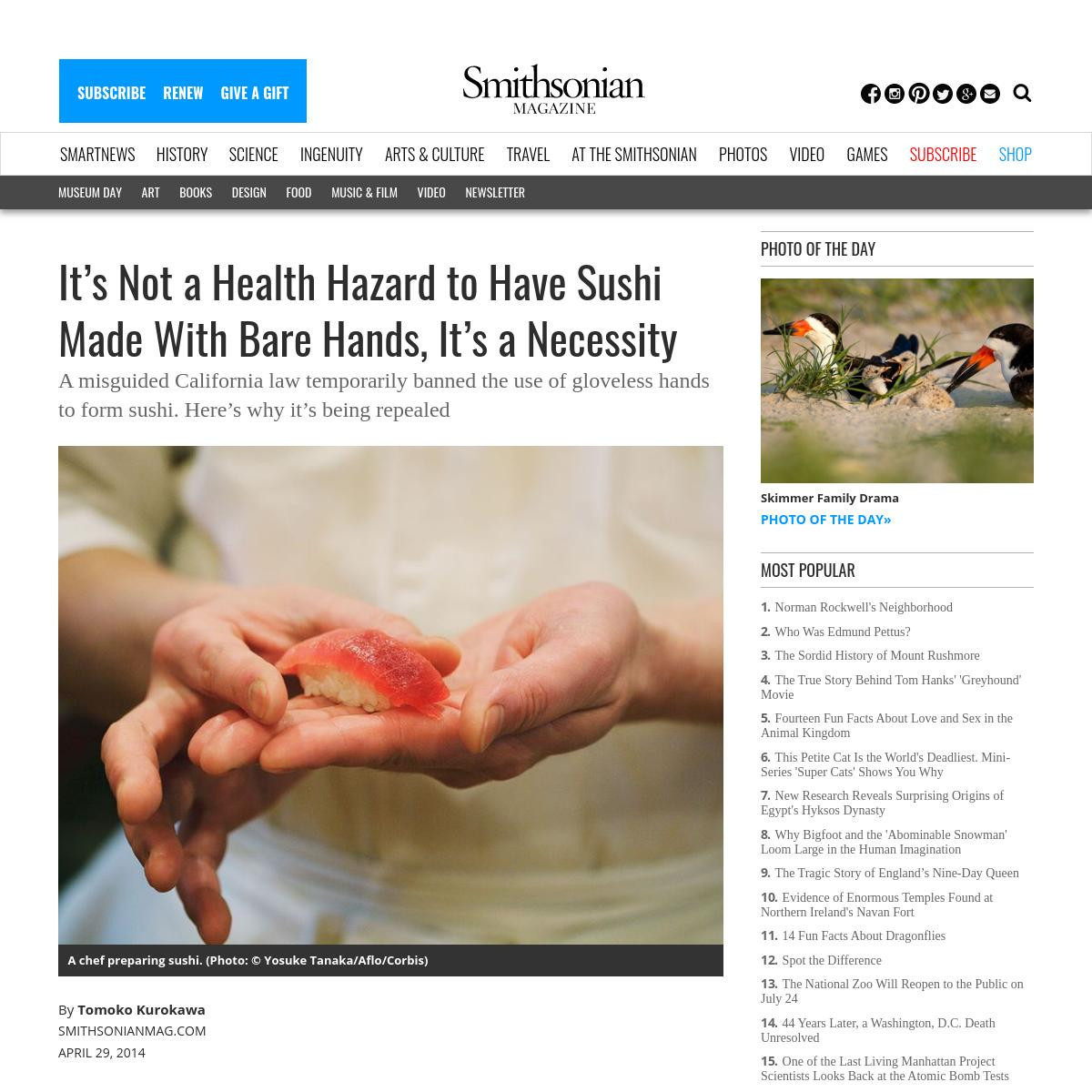 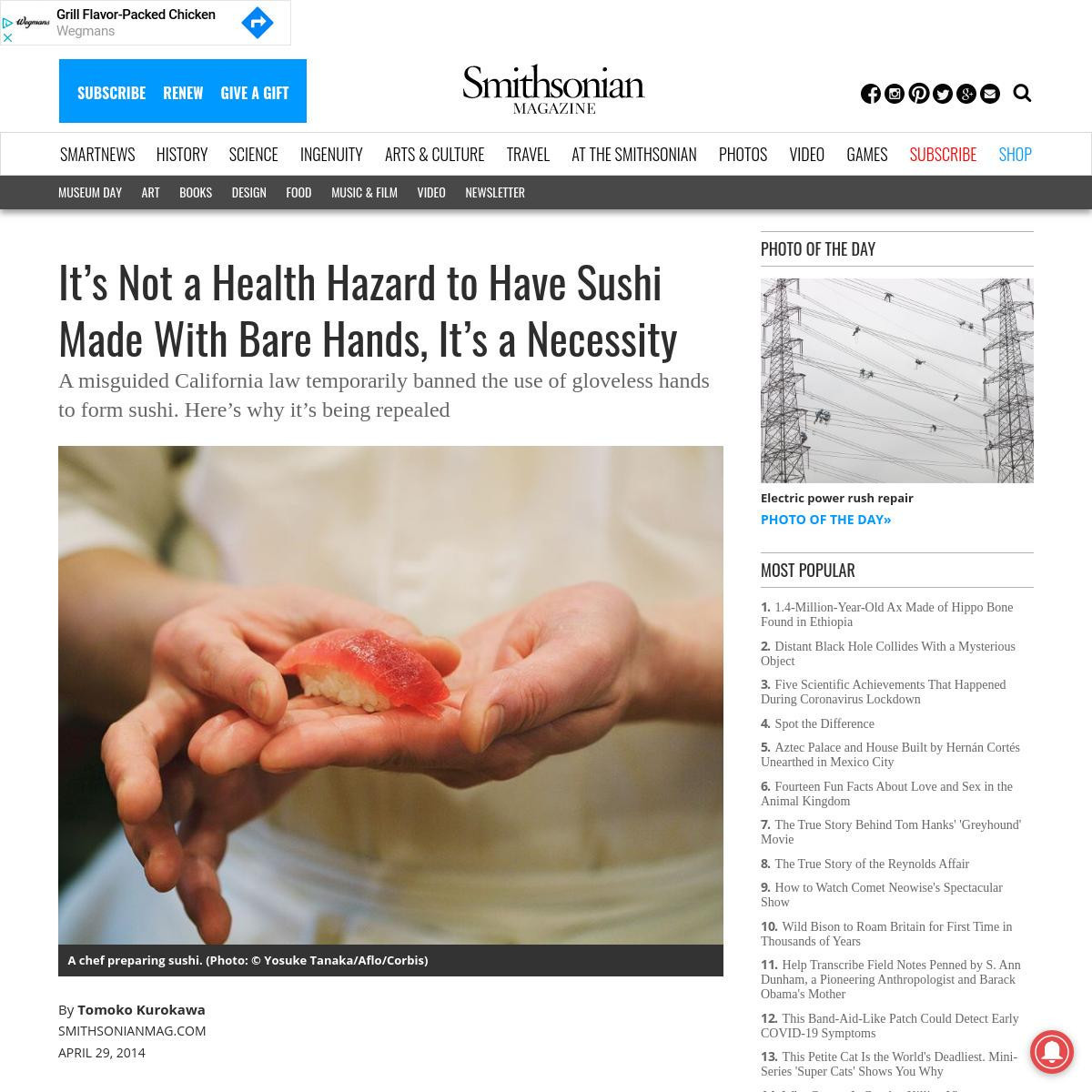