Large birds like the toucanet play important roles in dispersing big seeds in the Amazon. Photo by Edson Endrigo

Think of an ecosystem as a Jenga pillar. Each piece–microbes, birds, trees, insects, animals, fungi–comes together to form the larger, intertwined structure. Maybe you can knock out a Jenga block or two, but tamper with those components enough and the system will collapse. As ecologists well know, small changes in the environment–cutting down a few patches of forest, causing a local species to go extinct–can create cascading and potentially disastrous effects on the broader environment.

Like a teetering Jenga tower, predicting which of those changes will most significantly reverberate in the complex natural world is nearly impossible. So we wait to see the consequences.Today, an international team of researchers just identified a pointed example of one such fatal tinkering. In Brazil’s damaged Atlantic forest, the absence of large birds has caused seeds to shrink and become weaker, in turn threatening the forest’s future. A channel billed toucan perched on a forest palm. Photo by Lindolfo Souto

The story began more than a century ago, they found. Local people began hacking away at the Atlantic forest, which once covered more than 400,000 square miles of Brazil’s coast. Agricultural and livestock fields, as well as growing urban centers, divided swaths of jungle, creating isolated patches of green. By the time people realized there was value in keeping the forest around, nearly 90 percent of it had been lost. Much of what remains today occurs in isolated, random pockets, though those patches still represent some of the world’s most biodiverse forests.

When a forest becomes divided, like the Atlantic forest did, wildlife often loses its ability to disperse from one patch of trees to another. Larger species may not be able to survive in some of the smaller, resource-scarce patches, and hunters can more easily track down animals if they’re confined to a smaller area. This turned out to be the case for some large birds that once made their home throughout the Atlantic forest, including toucans and toucanets–prized for their brilliant plumage, the birds are a favorite of hunters.

Significantly, these birds’ big beaks–which open up more than half an inch, on average–make them key players in distributing larger seeds throughout the jungle. Smaller birds can’t swallow or fit those big seeds into their beaks, meaning the toucans and toucanets carry nearly sole responsibility for regenerating the jungle with new seedlings of several plant species. The authors of this new study, published in Science, compared the size of more than 9,000 seeds from 22 palm plant populations–a major tree type in the Atlantic forest, several species of which are threatened. Some of the seeds came from robust patches of forest with lots of large birds, while others came from smaller patches where those birds have long been missing. In those smaller patches, they found, seeds of palm plants were significantly smaller.

The researchers alsoused statistical models to independently evaluate 13 different environmental variables, including soil type and climate, to find out whether they could have driven the size difference seen in the seeds instead. None of the other factors could explain the difference, suggesting birds–the primary transport mechanism for large seeds–as the most likely culprit. Additional genetic analyses indicated that, in the smaller forest patches, seeds most likely began shrinking about 100 years ago, or right around the time that coffee and sugar cane plantations began to boom. Human activities a century ago, the authors conclude, likely drove a rapid evolutionary change in the forest palms’ seed size.

When the birds disappear, the larger seeds do not get distributed throughout the forest. Only the smaller ones wind up in new plots of earth, which in turn sprout into more trees that produce smaller seeds. Gradually, the forest becomes dominated by smaller seed-producing trees.

Shrinking seed size is no small detail for forest palms. The larger the seed, the more nutrients that are packed in to give the seedling the best possible chances of survival in the tough jungle ecosystem. Prior research has found that forest palms that began life as smaller seeds are smaller on average after a year of growth than those that came from larger seeds, meaning that the runty plants are more likely to lose out to competition with other species. Smaller seeds are also more prone to drying out. Given that climate models predict hotter temperatures and longer periods of drought for South America in the coming years, this could be a serious problem for smaller-seeded forest palms’ survival.

If palms start dying out throughout the Atlantic forest, researchers have no idea what will happen to the tens of thousands of species that take shelter in the ecological web the plants help to maintain–a web that includes more than 11,000 threatened plants and animals. For those smaller jungle patches, the authors speculate, the choices long-dead humans made may lead to complete collapse of some of the world’s most diverse sections of rainforest. Like a real-life game of Jenga, those birds could prove to be the key piece that causes the entire jungle system to fall down. 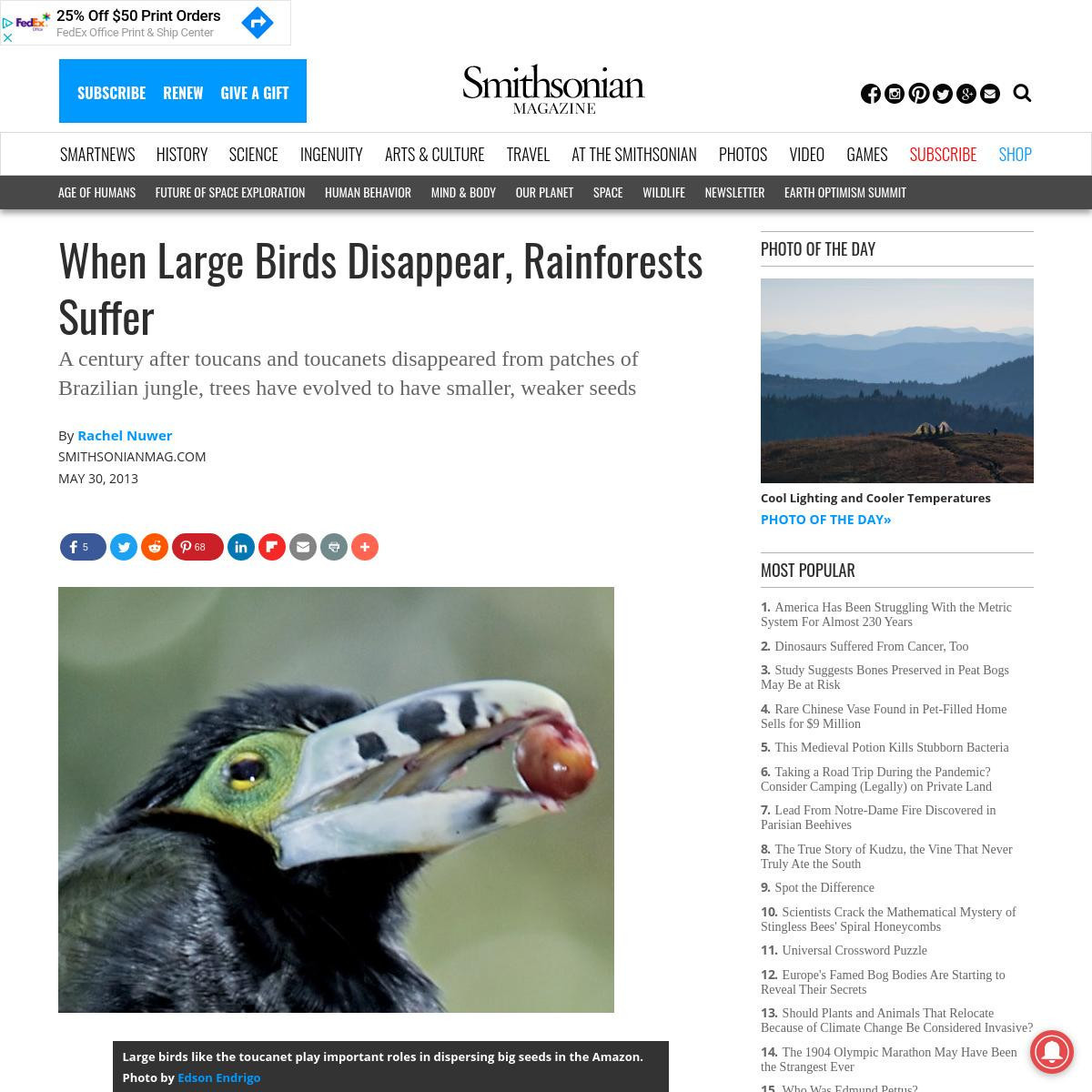