In the spring of 2007, the quietly simmering backlash against bottled water began to boil. Responding to well-organized pressure groups, first one, and then a dozen cities across the nation canceled their contracts for bottled-water delivery. Upscale restaurants struck fancy waters from their menus, and college students conducted taste tests intended to prove, once and for all, that most people can't tell the difference between bottled water and tap.

Suddenly bottled water was big news. Every time I opened a newspaper, magazine or Web browser, there was another story announcing that this harmless indulgence is anything but. On the lookout for this sort of material, I nearly drowned in the tidal wave of eco-criticism. With a mounting sense of anticipation—how far will the attacks go?—I watched as reporters, using statistics from academics and environmental groups, blasted away at the bottled-water industry. But curiously, their focus wasn't water, at ﬁrst. It was oil.

Speciﬁcally, the 17 million barrels it takes each year to make water bottles for the U.S. market. (Plastic-making also generates emissions of nickel, ethylbenzene, ethylene oxide, and benzene, but because we're in the thick of the global-warming movement, not the environmental-carcinogen movement, this doesn't get much play.) That's enough oil to fuel 1.3 million cars for a year.

Is 17 million barrels a lot? Yes and no. Total U.S. oil consumption is 20 million barrels a day. But the oil that goes into water bottles themselves doesn't include the energy needed to ﬁll them or to move them to consumers. Every week, a billion bottles snake through the country on tens of thousands of trucks, trains and ships. (In 2007, Poland Spring alone burned 928,226 gallons of diesel fuel.) And then there's the energy it takes to chill water in fridges and to haul the empties off to landﬁlls. It adds up.

Peter Gleick, president of the Paciﬁc Institute, estimates that the total energy required for every bottle's production, transport and disposal is equivalent, on average, to ﬁlling that bottle a quarter of the way with oil. His ﬁnding, undisputed by the water-bottling industry, shocks me. Oil, as we know, is a nonrenewable resource, mostly imported. The hunt for more oil is politically dangerous and expensive, and can be environmentally ruinous.

And then there's the water itself—increasingly important as we enter what's been called the post-Peak Water era. Manufacturing and ﬁlling plastic water bottles consumes twice as much water as the bottle will ultimately contain, in part because bottle-making machines are cooled by water. Plants that use reverse osmosis to purify tap water lose between three and nine gallons of water—depending on how new the ﬁlters are and what they remove—for every ﬁltered gallon that ends up on the shelf. Cleaning a bottling plant also requires a great deal of municipal water, especially if the end product is ﬂavored. On average, only 60 to 70 percent of the water used by bottling plants ends up on supermarket shelves: the rest is waste.

As 2007 wound down, bottled water sales slowed a bit, but it's hard to say if it was due to activist pressure, cool weather, high prices (oil costs more) or, as Nestlé Waters North America CEO Kim Jeffery says, a lack of natural disasters, which always spur demand. In any event, billions of cases of water continued to march out of supermarkets, and millions of bottles dribbled from everyplace else.

"People don't go backwards," says Arthur Von Wiesenberger, author of The Pocket Guide to Bottled Water and a consultant to the beverage industry. "Once they've developed a taste for bottled water, they won't give it up." Indeed, new bottling plants opened this past year in the United States, Europe, India and Canada; and entrepreneurs announced plans to bottle water in the Amazon, among other fragile landscapes, while Nestlé—the Swiss conglomerate that owns Poland Spring, Calistoga and many other U.S. brands of spring water, not to mention the French Perrier—continues to buy and explore new spring sites.

Still, among a certain psychographic, bottled water, not so long ago a chic accessory, is now the mark of the devil, the moral equivalent of driving a Hummer. No longer socially useful, it's shunned in many restaurants, where ordering tap is all the rage. Writing in Slate, Daniel Gross calls this new snob appeal entirely predictable. "So long as only a few people were drinking Evian, Perrier, and San Pellegrino, bottled water wasn't perceived as a societal ill. Now that everybody is toting bottles of Poland Spring, Aquaﬁna, and Dasani, it's a big problem."

But is it fashion or is it rising awareness of the bottle's environmental toll that's driving the backlash? I'm starting to think they're the same thing. Fashion drove a certain segment of society to embrace bottled water in the ﬁrst place, and fashion (green chic, that is) may drive that same segment to reject it. But the imperative to stop global warming—the biggest reason for the backlash—reaches only so far. For some, the imperative to protect oneself from tap water that either tastes bad or is bad, or the simple allure of convenience, may trump planetary concerns.

The International Bottled Water Association (IBWA), which represents 162 bottlers in the United States, is counting on it. Now in panic mode, the group is deﬂecting critics left and right. Bottled water uses only 0.02 percent of the world's groundwater, Joseph Doss, the group's president, argues in advertisements and interviews. (Yes, but it takes all those gallons from just a few places.) Other beverages move around the country, and the world, too: it's unfair to single out bottled water for opprobrium. (True: only about 10 percent of bottled water, by volume, is imported in the United States, compared with 25 to 30 percent of wine. But we don't drink 28 gallons of wine per person per year, and wine doesn't, alas, ﬂow from our taps.)

Another industry argument is that bottled water is a healthy alternative to high-calorie drinks. The IBWA says it competes with soda, not tap water. But this appears to be a change in stance. In 2000, Robert S. Morrison, then CEO of Quaker Oats, soon to merge with PepsiCo, distributors of Aquafina, told a reporter, "The biggest enemy is tap water." And Susan D. Wellington, vice president of marketing for Gatorade, also owned by PepsiCo, said to a group of New York analysts, "When we're done, tap water will be relegated to showers and washing dishes." In 2006, Fiji Water took that dig at Cleveland, with its "The Label Says Fiji Because It's Not Bottled in Cleveland" ad.

Since Americans still drink almost twice as much soda as bottled water, it's not surprising that Coca- Cola, owner of vitaminwater and Dasani, and PepsiCo. are covering all their bases. The companies now offer vitamin-fortiﬁed sodas, extending what Michael Pollan calls "the Wonder bread strategy of supplementation to junk food in its purest form."

The bottling industry also plays the emergency card: consumers should consider bottled water when tap isn't an option. When the pipes break and pumps fail, of course, but also when you are, well, thirsty. "It's not so easy, walking down Third Avenue on a hot day, to get a glass of tap water," John D. Sicher Jr., editor and publisher of Beverage Digest, a trade publication, says. And, yes, all those plastic bottles, which use about 40 percent less resin now than they did ﬁve years ago, really should be recycled, the bottlers all cry. "Our vision is to no longer have our packaging viewed as waste but as a resource for future use," says Scott Vitters, Coke's director of sustainable packaging, says. At the same time, bottlers tend to oppose container-deposit laws, which are funded by the beverage industry, in favor of curbside or drop- off recycling programs, which have, so far, been funded by taxpayers.

Are environmental activists making too much of bottled water's externalities? Surely other redundant, status-oriented consumer products—the latest iteration of an iPod, for example—are worse for the environment, and for those affected by their manufacture (though nobody buys an iPod a day). Michael Mascha, who publishes a bottled-water newsletter, is adamant on the topic: "All I want is to have a choice about what I drink. I want ﬁve or six waters to match a dining experience. Fine waters are a treat." Mascha can't help marginalizing the opposition. "The backlash is the green movement," he says, "and it's antiglobalization. They say water shouldn't be a commodity, but why should water be free? Why is it different from food, which we also need to live, or shelter?"

The antiglobalization argument comes from pressure groups such as Food and Water Watch, which runs a "take back the tap" pledge campaign, and Corporate Accountability International (CAI). They have ideological roots in single-issue social and environmental campaigns (curbing sweatshop abuses and old-growth logging, for example). In recent years, such campaigns have converged to challenge the political power of large multinational corporations that, often by exercising free-trade agreements, are presumed to harm the environment and infringe upon human rights, local democracies and cultural diversity.

In the United States, CAI's anti-bottled water campaign—which taps both the environmental and the antiprivatization movements—has a multi-tiered agenda. First, it wants to demonstrate that most people can't discern between bottled and tap water. Second, it informs the public that most bottled water is "just tap" (which isn't, strictly speaking, true). Volunteers also make their points about bottled water's carbon footprint and its expense compared to tap, and then they ask individuals, and local governments, to quit buying it. Depending on the city, CAI may also ask local ofﬁcials to forswear selling public water to private bottlers.

The group also pushes for water bottlers in the United States to quit undermining local control of water sources with their pumping and bottling. This last bit—opposing the privatization of a public resource—may be too outré for most mainstream news outlets to pick up on, perhaps because it raises sticky questions of ownership and control, and it offends many Americans' ideas about the primacy of capitalism. But while Corporate Accountability's mission to halt corporate control of a common resource might be abstract to most bottled-water drinkers, it isn't the least bit abstract to Californians resisting Nestlé's efforts to build a bottling plant in McCloud, near Mount Shasta, or to Floridians who swam in Crystal Springs until Nestlé began bottling it, or to those residents of Fryeburg, Maine, raging against Nestlé's boreholes and the big silver Poland Spring trucks that haul local water to markets throughout the northeast.

The fate of a spring-fed pond in Maine might not interest the average person slapping down two bucks for a bottle of Poland Spring at a concession stand, but the issue of who controls water may in the long run be even more important than how many barrels of oil are burned to quench the nation's thirst. We can do without oil, but we can't live without water.

Adapted from Bottlemania: How Water Went on Sale and Why We Bought It. Copyright Elizabeth Royte. Published by Bloomsbury. 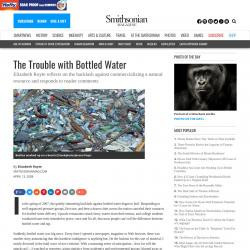