Will the Real Juan Valdez Please Stand Up?

Strolling past the colorful shops in the colonial town of Salento, in the heart of Colombia’s eje cafetero, or Coffee Triangle—the country’s main coffee-growing region—I’m struck by its intrinsic beauty. Both sides of the narrow street are lined with one- and two-story whitewashed structures, some with balconies and most with doors and window sills saturated in deep red, oranges and blues. A young mother and baby occupy a bench in front of one of the local trinket shops. Across the road, a teenage couple walks arm in arm by a café selling potato-stuffed rellenas and chorizo.

But there is one person I spot that really gets my heart pumping. Leaning in the doorway of Bar Quindio is a familiar mustachioed face, his hands tucked into his pockets and a wide-brimmed hat shielding his eyes. He smiles upon seeing us, and then continues gazing off into the distance. Is it him? Can it really be? Before I get the chance to speak, our tour guide Alex confirms my suspicions. “Look!,” he says. “It’s Juan Valdez!”

For more than 50 years, the fictional Juan Valdez has been the brand symbol of the National Federation of Coffee Growers of Colombia (Fedecafé), representing the coffee beans of more than 500,000 cafeteros, or coffee farmers, who grow and harvest their beans entirely within the country. He’s also a national folk hero, and along with international music star Shakira, one of the most recognizable figures worldwide to come out of the developing country. Valdez, who’s been appearing in print and TV advertisements for decades, wears the traditional dress of an arriero, or mule driver, a way of life that remains common throughout Colombia’s Coffee Triangle. Along with a straw hat and a striped poncho tossed over his shoulder, his ensemble includes sandals made of fique, a natural plant fiber, and a leather apron called a tapapinche tied around his waist. His mule, Conchita, is always by his side, carrying sacks of harvested coffee slung over his back. In television commercials over the years, Valdez has been seen hand-picking coffee cherries, appearing in kitchen pantries and walking around supermarkets with Conchita in tow. Today, there’s even a chain of Juan Valdez coffeehouses throughout Colombia and elsewhere, including Mexico, Spain, Costa Rica and the United States.

“There’s very little difference between Juan Valdez and Elvis, as both have transcended coffee and music to become cultural icons of their respective countries,” says Doug Towne, editor at the Society of Commercial Archeology (SCA), an organization that helps preserve, document and celebrate the 20th-century commercial landscape. But Valdez is dissimilar to say, the Jolly Green Giant or the Cracker Jack Sailor. More than a marketing tool, he represents a very real and vital percentage of Colombian society. “Juan Valdez has become the embodiment of Colombia,” says Towne. “Kind of like if the American flag, baseball and apple pie could be personified in a single U.S. citizen.”

Colombia is the world’s third-largest coffee producer and the biggest producer of Arabica coffee, considered a high-quality bean for its intense flavor. In 2009, the country produced 8.1 million 132-pound sacks of coffee, and nearly 30 percent of all rural areas in Colombia depend on the crop to survive. Ninety-five percent of all coffee growers in the country are small producers and most all of them belong to Fedecafé, founded in 1927 in part to help protect the local interests. With so much of Colombian culture invested in the coffee bean, it only makes sense that Valdez and his impersonator draw so much attention.

Image by Larry Luxner. In 2009, the country produced 8.1 million 132-pound sacks of coffee, and nearly 30 percent of all rural areas in Colombia depend on the crop to survive. (original image)

Image by Larry Luxner. In Salento, both sides of the narrow street are lined with one- and two-story whitewashed structures, some with balconies and most with doors and window sills saturated in deep red, oranges and blues. (original image)

Image by Larry Luxner. With so much of Colombian culture invested in the coffee bean, it only makes sense that Juan Valdez and his impersonator draw so much attention. (original image)

Image by Larry Luxner. There’s even a chain of Juan Valdez coffeehouses throughout Colombia and elsewhere, including Mexico, Spain, Costa Rica and the United States. (original image)

Back in Salento, however, Alex lets my travel companions and me in on a little secret: That’s not really Juan Valdez—the real-life farmer whom Fedecafé has chosen to represent the fictional character—standing before us, but a man posing as him. An impersonator’s impersonator, if you will. According to Alex, Marco Fidel Torres has been portraying Juan Valdez in Colombia’s Coffee Triangle for nearly a decade. He and Torres first met about six years ago at Quindio’s Parque Nacional del Café, a national coffee theme park devoted to the history of Colombia’s coffee culture and production. The park employed Torres, an arriero by trade, to demonstrate how to pack, wrangle and travel with mules. But rather than expressing interest in Torres’ work, many of Alex’s clients (then a free-agent tour guide, Alex now works solely for a specialized tour company) were more eager to have their pictures taken with him, a real-life “Juan Valdez.”

And they weren’t the first. “Fidel has always been an arriero,” says Alex. “It’s a family tradition passed down for generations. And in Salento, where he lives, tourists were always asking for photos with him because of his dress and his similarities to Valdez. He eventually realized he could make some money playing the role.” Today, Torres earns a good portion of his income posing for photos as Juan Valdez in and around Salento. On weekends he continues demonstrating his arriero skills, now at the region’s Los Nevados National Natural Park.

But not every mule driver or coffee farmer can be Juan Valdez—in this case, the man who’s been interviewed, evaluated, tested, vetted and eventually hired to represent Colombia’s coffee culture and product throughout Colombia and at markets and events worldwide. New York City-based ad agency Doyle Dane Bernbach (also known for coming up with Quaker Oats’ Little Mikey) first created Juan Valdez for Fedecafé in 1959, designing an image to accurately represent the bulk of small coffee farmers who make up the federation.

Strangely it was a Cuban-American actor, José F. Duval, who initially portrayed him. Duval held the position until 1969, when Carlos Sánchez, a coffee farmer and artist from Colombia’s northwestern department of Antioquia, took over the reins. It’s Sánchez’s bright eyes and jovial smile that most westerners are familiar with, though not his voice; that belonged to Norman Rose, a Pennsylvania-born actor who passed away in 2004. Sánchez kept the title of Juan Valdez title until 2006, when he retired to Medellín. Anticipating his departure, Fedecafé began looking for a new Juan Valdez in 2004, embarking on an intensive two-year search for the right Colombian man. From an initial pool of more than 380,000 applicants (including Torres, who didn’t make it past the in-person interview because of his age, which Rodriguez estimates to be somewhere near 70), they selected 30 finalists, who were then put through a grueling series of advertising sessions, psychological exams, behavior and personality tests and interviews with journalists.

In the end, the honor went to Carlos Castañeda, a 44-year-old coffee grower and married father of three from the town of Andes, Antioquia, about 80 miles outside of Medellín. With his family values and rugged good looks, Castañeda is the ideal Valdez, young enough to appeal to a new generation of coffee drinkers and to provide longevity to the role. Appearing on his official website, Castañeda sports the same white hat, dark moustache and button-down shirt as his predecessors, though with one big difference: he carries a cell phone in his leather satchel.

While Castañeda is busy making the international rounds as both a coffee spokesman and national representative, arrieros like Torres are holding down the fort back home. And being a local Juan Valdez does have its perks. Along with all the makings of Colombia’s cult hero—a genuine smile and a distinctive air, not to mention a mule companion—Torres can come and go as he pleases. The day after meeting Torres in Salento, Alex accompanies my companions and me to the El Edén International Airport in La Tebaida for our flight into Bogotá. A couple hours early, we sit down together for a beer in the terminal’s small food court. There, leaning against a wall is a mounted, poster-sized photo of Torres. “I told you,” says Alex, beaming. “My friend is famous around here.”

Women love him. Children adore him. And he’s a legend from Salento to at least San Francisco, where his framed photo occupies a prominent spot on my mantle. 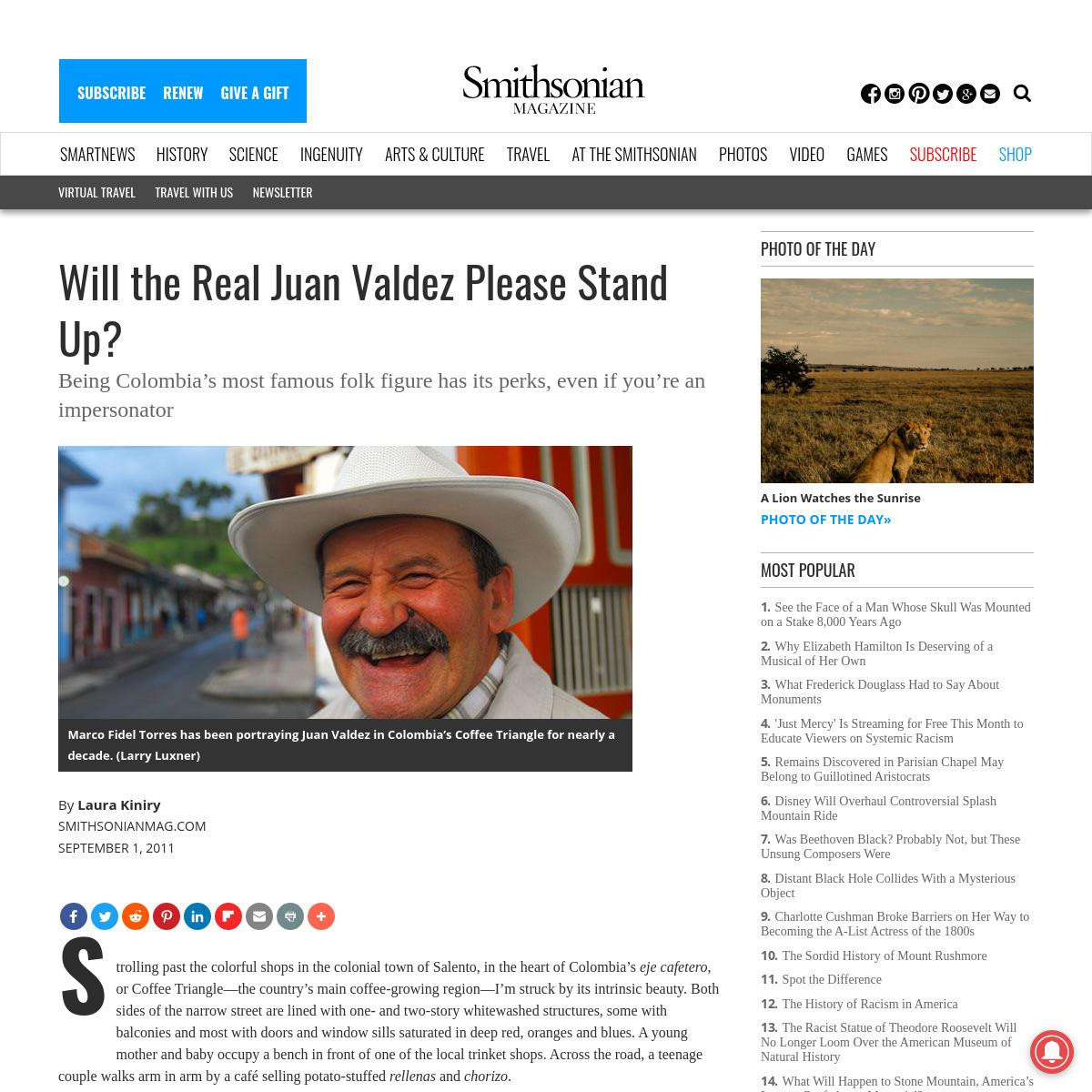