Change Author / Owner : Things to Do in Quito While Nursing Achilles Tendonitis Quito, Ecuador, is a beautiful city both up close and from afar. This photo was taken from the towering slopes just west of the city, accessible by a chairlift. Photo courtesy of Flickr user jrubinic.

Climbing the Parador de Navas last week, I felt it happen—a ping of pain in the rear of my leg, four inches above the heel. An ache set in as we crawled to the top of the pass, and I knew it was back—my recurring Achilles tendonitis. I spent a week in Plovdiv, Bulgaria, 16 months ago lying in a hostel bed, reading, typing, visiting the local gym, sitting on benches, eying the distant Rhodope Mountains and waiting for a similar Achilles strain to heal up—and I know the boredom that can arrive with athletic injuries. But this time, I have limped into Quito, Ecuador, a fast and modern hub of sophisticated people, energy and activity. Boredom should not be an issue here. Mangoes may cost $2 a piece from sidewalk vendors—a harsh reminder for the hungry cyclist that he is no longer in the boondocks. But there is life beyond cheap mangoes, and it can be found in Quito’s clean public parks, brewpubs, wine bars, bicycle shops, historic center and so much more. Here are a few things to do that can keep one entertained in this highest (when measured from the Earth’s center) of big cities.

Sample Local Microbrews I have no love for Peruvian wine—and as an alternative, my brother and I have taken to the abundant if boring South American lagers available in every corner grocery store. Thing is, I have no love for cheap lagers, either. So when I learned that two brewpubs operated within blocks of the Hostal del Piamonte, where I have been icing and elevating my leg, I ran for them. Limped, anyway. At Cherusker German Brewery, we found a club-like scene with leather sofas and a rustic brick interior—and four beers on tap. That could leave many an American beer nerd thirsting for more options, but in Ecuador, the chance to drink a Belgian-style dubbel and a dark, smoky stout provided much needed respite from lesser beers. After one round, we walked north several blocks to sample the other city brewpub, Turtle’s Head Pub and Microbrewery. A pilsener, a Scottish amber and a stout made up the extent of the house-made beers. The amber was malty, thick and chewy, the stout creamy, smooth and sweet.

Craft beer is hard to come by in much of Ecuador, but these handsome brews—two stouts and a Belgian-style dubbel—can be enjoyed near Quito’s thriving Foch Plaza at the Cherlusker brewpub. Photo by Alastair Bland.

Hunt for Espresso Machines Each time we emerged from the desert or jungle into a village in the past three weeks, we listened for that sweet song of the espresso machine. One time I even asked the villagers, “Please, for mercy, is there an espresso machine in this town?” I was thirsty and desperate and hopeful, and the town’s main street boasted some relatively upscale establishments. Several men gathered around me, all frowning and shaking their heads in befuddlement. “Say, Fred, what’s this kid talking about, what with machines that make coffee and all?” “Beats me, Leroy. Does he think he’s arrived in the future?” I even made the whooshing-hissing noise that coffee drinkers so love to hear at 7 a.m.—but the men shook their heads. “Let’s go! His mind is gone.” They had not heard of an espresso machine. But Quito is fast, smart, slick, modern. In hundreds of bars, cafés and eateries, espresso machines hiss like the finest apparatuses of Europe. Cafe lattes arrive with hearts and mountains shaped into the foamy milk, and espresso comes in cups like thimbles, as smart and sophisticated as coffees enjoyed in the bistros of Paris. Top recommendation: Este Cafe, on Juan León Mera street.

Work Out on the Exercise Bars in Parque El Ejido As we rode into the center of Quito on our first day, I had my eyes peeled for that sure signature of any modern metropolis undergoing swift and progressive social development: outdoor exercise bars at the public park. After checking into our hostel, we walked several blocks back to Parque El Ejido, where we had seen among the people and the trees some playground-type structures that looked very promising. Sure enough, we found them—a rock-solid, two-tiered set of pull-up bars in the shade of the trees. A security guard (they stand around every corner and behind every tree in Ecuador) paced slowly around the jungle gym while Andrew and I got to work. My brother, ten pounds lighter than he’d been in Lima, started with an all-time best set of 20. I did only 17—but, really, who’s counting? See you at the bar. Note: The same park comes alive with scores of market vendors and thousands of visitors each Sunday. It’s a good time, but you’d better get your bar time in early, before the kids arrive. Quito’s Parque El Ejido is a popular walking and cycling destination—and a fine place to work out between meals, beers and cappuccinos on the outdoor gymnasium equipment. Photo by Andrew Bland.

Stalk the Aisles of the English Bookshop Quito is great—but if you need to get away fast, step into the compact, book-stuffed space of the English Bookshop, in La Mariscal. Owned by London native Mark Halton, the store—at Calama and Diego de Almagro streets—provides a refuge of wisdom and intelligentsia for English speakers craving some bookish conversation and quiet time. The shop is crammed with used quality literature (well, there’s also some sci-fi, but never mind), plus a selection of Ecuador travel guides for rent.

Enjoy the City’s Many Miles of Bike Paths Quito bears many marks of a sophisticated hub of culture and style—enthusiastic brewpubs, art museums, numerous sporting goods stores and air-conditioned supermarkets. What more could one want? Bike paths, of course. Leading through the city are miles and miles of them—two-directional lanes separated by barriers from the auto traffic and leading to all corners of the city. But bike paths can always use improvement. In Lima, for instance, the hip locals dump heaps of trash in the bike lanes and set the rubbish on fire. In Quito, businessmen who haven’t ridden a bicycle since they were 8 years old use the lanes as personal sidewalks, and at intersections pedestrians gather in the bike lane as they wait for the light to change. No—not all Ecuadorians are totally wise yet to the concept of the separated, designated bike lane. But parts of Quito are almost as cool and edgy as Amsterdam or Portland, and locals will catch on. Quito is a modern city with many of the marks of progressive development, like a network of bike paths. Photo by Alastair Bland.

Ride the Gondola to Cruz Loma Lookout Taking a ride on a gondola is a bitter pill to swallow for a proud cyclist with a leg injury. But the TelefériQo Cruz Loma chairlift, beginning at the western edge of Quito, ascends 2,700 feet in eight minutes, taking passengers to the best vista point in the region—Cruz Loma, near the top of Mount Pichincha. The cost is about $9, with discounts for privileged locals and even the option to bring a bicycle to the top and ride the trails back down to the city. Sounds like a blast—but I’ll wait until I can make the entire journey by my own strength.

Get Screened for Malaria at a Local Medical Clinic If you’ve got the shakes, the shivers, nausea, achy joints, stomach troubles or a headache and have traveled in malaria hot zones anytime from a week to a year prior, you had better get checked out. That’s the logic we followed when Andrew came down with sluggishness and other flu-like symptoms on our second day in Quito. We decided that if his condition persisted in the morning, we would go to the hospital. He woke up in a sweat, and off we went on a new adventure. The Clinica de San Francisco was just four blocks away from us, and by 9 a.m. Andrew was having blood drawn and his internal organs examined by stethoscope. The doctor said that Andrew’s relatively mild symptoms did not appear to be malaria-related, but Plasmodium falciparum is a disease to be taken very seriously. The most deadly type of malaria, it is especially dangerous if not identified and treated within 24 hours of the first visible symptoms. The doctor said the test results would be e-mailed within three working days—plus two weekend days. Isn’t that cutting it close, we asked? Don’t worry, the doctor answered; Andrew does not have malaria. We hope so.

And Keep That Leg Elevated Patience and pineapple juice: The author endures the slow healing process of a damaged Achilles tendon. Happily, there are worse places than Quito to recover from injuries. Photo by Andrew Bland. 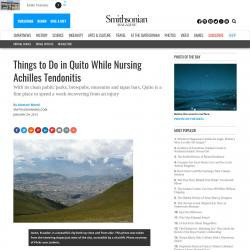