Starchy staple of the tropics, the breadfruit is often fried or baked and eaten like potatoes. Photo courtesy of Flickr user Librarian in Black.

Eating locally grown produce may be the easiest way to help spare the planet the stresses of cross-global commerce, and many of us have been all but trained out of buying imported fruits (though we tend to ignore the exotic realities of bananas, coffee and cheap Australian wines). But what if we make a voyage across the world to eat their local specialties? Does that count as eating locally? Probably not—but there are some fruits so unique, so exotic and so tied up with the place and the people from which they emerged that one simply must travel to truly taste them. And here are just a few of the best, most historical, most charismatic of the world’s fruits. Go get them at the source.

Breadfruit, Polynesia. The food value of this whopper tree fruit and starchy staple of the tropics has been heraldedfor centuries. The fruit grows on beautiful, large-leaved trees and cooks up like something between potato and bread. The British first gave close consideration to the species in the 1760s as Captain James Cook sailed the Pacific. An onboard botanist named Joseph Banks observed the breadfruit and was impressed by its yields and quality. In 1787, Banks returned to the Polynesian breadfruit country, this time on the ill-fated HMS Bounty captained by William Bligh. The boat’s mission, before it was taken over by miscreants, was to collect breadfruit trees in Tahiti and transport them to the Caribbean to provide a new food source for slaves in the sugarcane fields. Today, breadfruit, like so many tropical fruits, has been introduced to nearly every suitable region around the equatorial waistline of the globe, and in many places the trees grow semi-wild. Hawaii is just one hotspot. In Holualoa, the Breadfruit Institute is home to the largest varietal collection of breadfruits in the world—a tidy orchard of 120 varieties. The institute also co-hosts the annual Breadfruit Festival, which took place in March, but in many places, breadfruit trees fruit year-round.

Pitahaya cactus fruit, Baja California. Not to be confused with the common prickly pear or with the pitaya dragon fruit, the pitahaya fruit is brilliant red, is prickled with needle-like spines that fall off as the fruit ripens and resembles a crimson kiwi when cut in two. The fruit occurs in the Sonoran Desert of Mexico, with the Baja California peninsula a center of abundance. The fruit grows from the long arms of the so-called “galloping cactus,” which anyone who visits Baja will see. The octopus-looking plants are a dull green and mostly unremarkable—until September. That’s when the bright red bulbs the size of apples swell into ripeness, and until December the feast is on. The fruits occur by the millions, and tequila-sipping cowboys, fishermen with the day off, families from the city and even a few tourists wearing backpacks all take to the desert to pursue the pitahaya, filling buckets and bringing them home like many northerners do with wild blackberries. October is a sure hit for the pitahaya on the southern half of the Baja peninsula. The best bet: Bring camping gear and go out a-walkin’. Beware of the sun, and watch out for rattlesnakes. The fruits should be attacked with a knife, sliced in two, and eaten with a spoon like a kiwi. A piece of pitahaya trivia: Local indigenous people historically feasted on pitahayas in the fall, and toward the end of the season they sifted the many small seeds from their communal latrines to grind into flour.

Salmonberry, Southeast Alaska. Going to the Pacific Northwest this July? Then watch the berry bushes closely. You’ll see raspberries and blueberries and blackberries—and a lesser known one called the salmonberry. As tender and soft as a raspberry, the salmonberry is about the size of a farm-grown strawberry. That is, the things are huge. I discovered the salmonberry in 1999 on Prince of Wales Island, where my brother and I spent five weeks backpacking, hitchhiking and fishing for salmon. Salmonberry thickets lined most streams and roads, and many afternoons we set aside our fly rods to pick berries. The abundance was mind-boggling, and we would fill our Nalgene bottles in just minutes, each down a full quart of pulverized salmonberries, and then return to the brambles to fill our bottles for dinner. One afternoon, we rappelled down a cliff to access a particularly thick patch. We often dodged black bears working the same patches. We ate salmonberries until we couldn’t move, and when we could stand again, we went back for more. We grilled up sockeye salmon every day for lunch and dinner, and we often drizzled hot salmonberry reduction over the fillets. We feasted on these exciting new berries until the season petered out in August. Then we went home, and we have never seen a salmonberry since—but Michael and I still talk about the summer of ’99, the summer of the salmonberry. This pair of Italian mushroom collectors have taken about 50 pounds of porcini from a forest in the Dolomites, northern Italy. Photo by Alastair Bland.

Porcini mushroom, Italy. As surely as the apple is the fruit of the tree, the mushroom is the fruit of the fungus—and perhaps no edible mushroom is so unmistakable or such a sure find in the times and places that it grows as Boletus edulis. Called cep in French, king bolete in English and manatarka in Bulgarian, this mushroom is the famous porcini in Italy. Here, this giant, brown-capped mushroom fruits in huge abundance in the late summer and fall. The species tends to grow among chestnut trees throughout southern Europe, and following the first of the autumn rains, the forest floor erupts. Local hunters swarm the woods. Until the winter frost ends the season, households grow fragrant with the nutty, smoky scent of drying and frying porcini, much of the harvest destined for pasta sauces. Can’t get to Italy? That’s fine, because Boletus edulis spores have drifted around the Northern Hemisphere, and in China, California, New York, Greece and Russia, the porcini mushroom grows. Note: The species occurs among different trees in different places—Douglas fir forests in the Pacific Northwest, Monterey pines in Central California and mixed deciduous forests on the Eastern Seaboard. But be smart, and only hunt mushrooms with an experienced forager, and if in doubt, throw it out—not into your risotto. Stacks of durians occupy the streets of Malaysia during the harvest season each spring and summer. Photo courtesy of Flickr user Fadzly @ Shutterhack.

Durian, Thailand. Just as a wine writer is sure to speak again and again of the tireless Pinot Noir, a writer with an interest in fruits must pay regular tribute to the durian. This spiky and musky-odored beast is called the “king of fruits” in Southeast Asia and can be found worldwide in most large cities with thriving Asian communities—but these imported durians, usually from Thailand, are generally ones that have been frozen. They’re delicious, but fresh off the tree, the durian, which includes multiple species of the genus Durio, is said to be an experience just short of heavenly—the onion-vanilla flavor of its custard-like flesh amplified in every tantalizing way. In the jungles of Southeast Asia, Borneo and Indonesia, locals keep their ears tuned to the trees during the late-spring peak of durian season. Upon hearing a heavy thwunk, they go prowling—seeking the freshly fallen fruit, which is said to lose much of its aroma and flavor in mere hours after harvest. Journalist David Quammen described the hunt for durians on the forest floor in his collection of essays The Boilerplate Rhino. Author Adam Gollner praised the durian in The Fruit Hunters while giving a wary nod to a bizarre subculture of nomads who call themselves durianarians, who camp their way through Asia following the durian season. And in the mid-1800s, durian-lover Alfred Russel Wallace famously wrote that making a journey to the Southeast Asian durian districts is well worth the weeks of sailing just to have a taste. Even tigers, though built for beef-eating, can’t resist durians.

Next week: More fruits to eat locally when traveling globally. 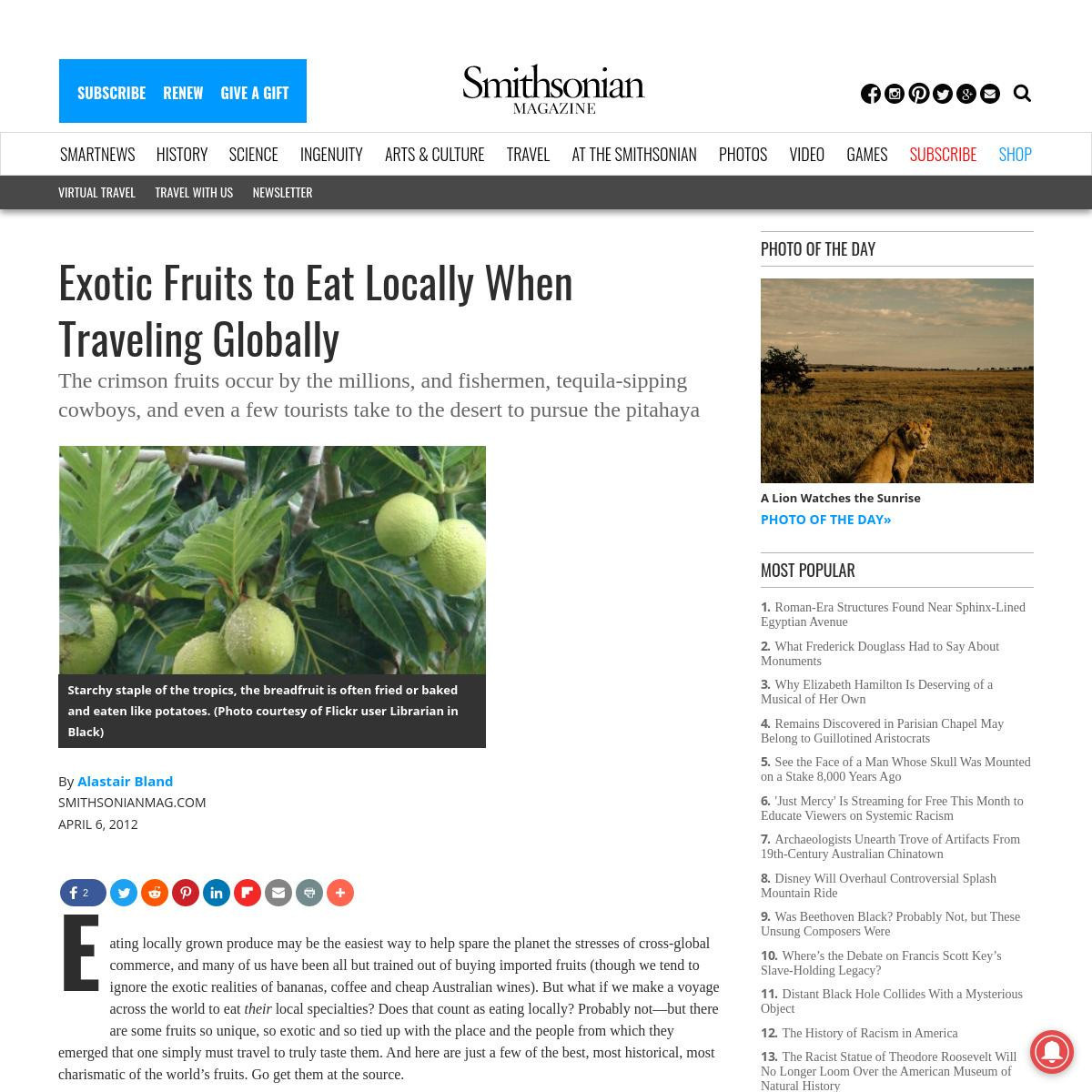