California reverberates with wild wonder. Earth's oldest living thing (the bristlecone pine), Earth's largest living thing (the giant sequoia), North America's largest bird (the California condor), North America's most recent amphibious surprise (the San Gabriel salamander, discovered within the boundaries of Los Angeles) all call California home. And though the wilds are not about accounting, a few numbers make a point. Of California's 3,488 native plant species, 60 percent are found nowhere else on the planet. Endemic insect species number in the thousands. And birds—both visiting and local—draw birdwatchers year-round.

Witness the elephant seals of Piedras Blancas, which turn the beaches near San Simeon into a wondrous assault on sanity and the senses—creatures up to 16 feet long and 5,000-plus pounds, blurting, bellowing and dangling their trunk like noses in showy excess. All this, right off the Pacific Coast Highway. Park your car, and see imagination and table manners gone awry.

Visitors can grab a front-row seat along the California coast every winter and spring as thousands of whales migrate south. In California, the gray whale is the most commonly seen migrating whale and reaches up to 45 feet in length, weighing up to 100,000 pounds each and numbering more than 20,000. The whales follow a route from the frigid Bering and Chukchi seas, north of Alaska, along the California coastline to the warm waters of Baja California. There they give birth to 1,500-pound calves before returning home to Alaska in the spring. The whales travel approximately 70 to 80 miles per day at a rate of three to five miles per hour. The whales' 14,000-mile-roundtrip trek is the longest known distance any mammal migrates on an annual basis. In Long Beach, located in Los Angeles County, the Aquarium of the Pacific offers educational whale-watching cruises aboard the Challenger, a 115-foot Coast Guard certified boat to see whales, dolphins, sea lions and a host of migratory waterfowl. Several charter companies offer excursions throughout Orange County. In Newport Beach, boats leave daily from Newport Harbor during the season. Some passengers spot seals and sea lions on the trip. Dana Point's 200-foot cliffs serve as a landmark for migrating whales, while Dana Wharf offers multiple cruises daily during the winter. On the North Coast, the Mendocino Coast Whale Festivals are typically scheduled in March in Mendocino and Fort Bragg. In Mendocino, a free trolley takes travelers to events, such as a chowder tasting and whale-watching walks.

Those looking to enjoy some fall scenery can find plenty to view in California. Whether traveling by car, mountain bike or your own two feet, the Golden State offers a wealth of areas that showcase the striking autumnal displays from September to November. In California, fall foliage is synonymous with the Shasta Cascade Region, which offers some of the state's most spectacular displays of colors amid rugged and rolling terrain. Many of the quiet driving routes and hiking trails, off Highway 70 and 89, can be found in the self-guided tour brochure Fall Colors of Plumas County. The High Sierras put on a fantastic fall display. In Mammoth Lakes, the leaves begin to change in mid-September. Some of the local hot spots for viewing include the Red Meadows area, with side trips to Rainbow Falls and the Devils Postpile National Monument, for its old aspens. The Highway 395 corridor through Bishop is also magnificent, especially the Owens Valley and the Bishop Creek Canyon. Those venturing to Southern California can delight in the historic mining town of Julian, located in San Diego County, which offers colorful fall foliage in the Cuyamaca Mountains at an elevation of 4,235 feet. Also enticing visitors are the homemade apple pies and cider at the Annual Julian Fall Apple Harvest. 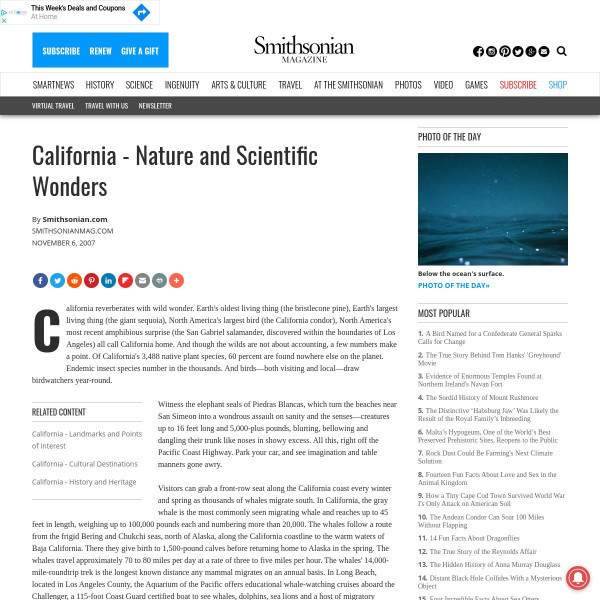