Back in December, I wondered if you could plan an itinerary for the entire year in which everything you did was Darwin-related. I quickly discovered that planning itineraries is hard work (my friends over at Smithsonian Journeys do this every day—they are amazing) and stopped in early May, leaving us in London. But I've kept at it and managed to fill the rest of the year. So where to next?

May 12: Debate in Westminster Abbey, London, chaired by the BBC's John Humphrys and sponsored by Theos and the Faraday Institute for Science and Religion. The debate will explore the compatibility of belief in God and Darwinian evolution.

May 13: View the Alfred Russel Wallace Collection at the Natural History Museum, London. May 16: Darwin’s London, Hunterian Museum at the Royal College of Surgeons of England, London.

May 17 – 19: Sightsee through southern England on the way to Lyme Regis.

May 20-21: Go on a fossil hunting tour in Lyme Regis. Visit the Lyme Regis Museum.

June 2 – 30: Travel home. Check to see if house still exists. Call friends who haven’t heard from you in months. Feed cat. Pack for the next bit of travel. Reread On the Origin of Species and The Descent of Man.

July 1: Fly back to England.

July 4: Wonder why no one around you is celebrating Independence Day.

July 14: Take the train to Oxford. July 19: Fly to the Galapagos Islands.

July 20 – 24: Darwin celebration in the Galapagos, hosted by the Charles Darwin Foundation.

August 1 – 3: Fly home. Call mom and explain why you aren’t going to visit her this year. Pack.

August 11: Fly to Chicago. Wonder why you planned to go to Chicago when its 90+ degrees out. Remember that at least you didn’t plan to go when it was -20 degrees.

August 12: Visit the Museum of Science and Industry and the Field Museum.

August 13: Wander among the animals at the Brookfield Zoo.

August 14: Visit your brother; talk about his new research project.

August 18: Spend the day at the American Museum of Natural History. Wander out into Central Park.

August 19: Check out the New York Hall of Science.

August 21 – 22: Hang out with scientists at the Marine Biological Laboratory. Enjoy the beach.

August 23: Back to the Galapagos! September 19 – 22: Darwin’s Mistake and what we are doing to correct it, Azores.

September 27: Take advantage of being in Switzerland and eat lots of Swiss chocolate.

October 4: Visit the Manchester Museum of Science and Industry. October 13 – November 23: Smithsonian Journeys tour – South America’s Ancient Civilizations. Among the destinations on this 40-day cruise is the Beagle Channel, named for Darwin’s ship the HMS Beagle, which explored these waters in 1832.

November 24 – December 31: Follow the footsteps of Alfred Russel Wallace and visit the Amazon.

January 1, 2010: Stop thinking about Darwin. Obsess about something else. Any suggestions?

(Many thanks to Darwin Online for compiling the list that contained many of these events.) 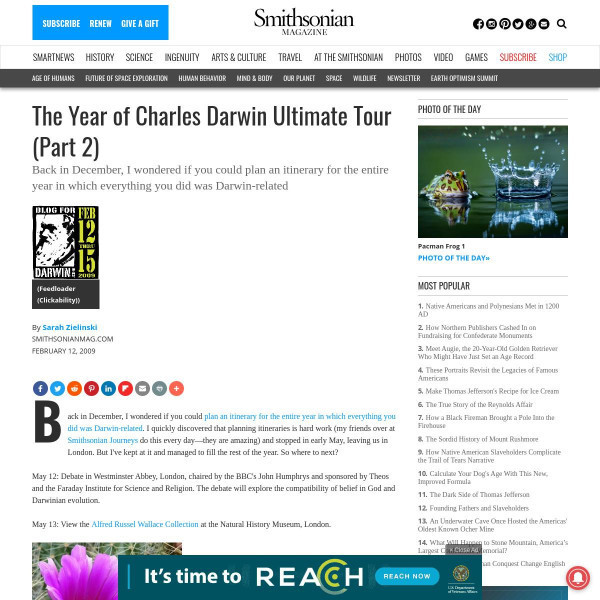