The Great Dissenter and His Half-Brother
Description

He was known as “the Great Dissenter,” and he was the lone justice to dissent in one of the Supreme Court’s most notorious and damaging opinions, in Plessy v. Ferguson in 1896. In arguing against his colleagues’ approval of the doctrine of “separate but equal,” John Marshall Harlan delivered what would become one of the most cited dissents in the court’s history.

Then again, Harlan was remarkably out of place among his fellow justices. He was the only one to have graduated from law school. On a court packed with what one historian describes as “privileged Northerners,” Harlan was not only a former slave owner, but also a former opponent of the Reconstruction Amendments, which abolished slavery, established due process for all citizens and banned racial discrimination in voting. During a run for governor of his home state of Kentucky, Harlan had defended a Ku Klux Klan member for his alleged role in several lynchings. He acknowledged that he took the case for money and out of his friendship with the accused’s father. He also reasoned that most people in the county did not believe the accused was guilty. “Altogether my position is embarrassing politically,” he wrote at the time, “but I cannot help it.”

One other thing set Harlan apart from his colleagues on the bench: He grew up in a household with a light-skinned, blue-eyed slave who was treated much like a family member. Later, John’s wife would say she was somewhat surprised by “the close sympathy existing between the slaves and their Master or Mistress.” In fact, the slave, Robert Harlan, was believed to be John’s older half-brother. Even John’s father, James Harlan, believed that Robert was his son. Raised and educated in the same home, John and Robert remained close even after their ambitions put thousands of miles between them. Both lives were shaped by the love of their father, a lawyer and politician whom both boys loved in return. And both became extraordinarily successful in starkly separate lives.

Robert Harlan was born in 1816 at the family home in Harrodsburg, Kentucky. With no schools available for black students, he was tutored by two older half-brothers. While he was still in his teens, Robert displayed a taste for business, opening a barbershop in town and then a grocery store in nearby Lexington. He earned a fair amount of cash—enough that on September 18, 1848, he appeared at the Franklin County Courthouse with his father and a $500 bond. At the age of 32, the slave, described as “six feet high yellow big straight black hair Blue Gray eyes a Scar on his right wrist about the size of a dime and Also a small Scar on the upper lip,” was officially freed.

Robert Harlan went west, to California, and amassed a small fortune during the Gold Rush. Some reports had him returning east with more than $90,000 in gold, while others said he’d made a quick killing through gambling. What is known is that he returned east to Cincinnati in 1850 with enough money to invest in real estate, open a photography business, and dabble quite successfully in the race horse business. He married a white woman, and although he was capable of “passing” as white himself, Robert chose to live openly as a Negro. His financial acumen in the ensuing years enabled him to join the Northern black elite, live in Europe for a time, and finally return to the United States to become one of the most important black men in his adopted home state of Ohio.  In fact, John’s brother James sometimes went to Robert for financial help, and family letters show that Robert neither requested nor expected anything in return.

By 1870, Robert Harlan caught the attention of the Republican Party after he gave a rousing speech in support of the 15th Amendment, which guarantees the right to vote “regardless of race, color or previous condition of servitude.” He was elected a delegate to the Republican National Convention, and President Chester A. Arthur appointed him a special agent to the U. S. Treasury Department. He continued to work in Ohio, fighting to repeal laws that discriminated on the basis of race, and in 1886 he was elected as a state representative. By any measure, he succeeded in prohibitive circumstances.

John Harlan’s history is a little more complicated. Before the Civil War, he had been a rising star in the Whig Party and then the Know Nothings; during the war, he served with the 10th Kentucky Infantry and fought for the Union in the Western theater. But when his father died, in 1863, John was forced to resign and return home to manage the Harlan estate, which included a dozen slaves. Just weeks after his return, he was nominated to become attorney general of Kentucky. Like Robert, John became a Republican, and he was instrumental in the eventual victory of the party’s presidential candidate in 1876, Rutherford B. Hayes. Hayes was quick to show his appreciation by nominating Harlan to the  Supreme Court the following year. Harlan’s confirmation was slowed by his past support for discriminatory measures.

Robert and John Harlan remained in contact throughout John’s tenure on the court—1877 to 1911, years in which the justices heard many race-based cases, and time and again proved unwilling to interfere with the South’s resistance to civil rights for former slaves. But Harlan, the man who had opposed the Reconstruction Amendments, began to change his views. Time and again, such as when the Court ruled that the Civil Rights Act of 1875 was unconstitutional, Harlan was a vocal dissenter, often pounding on the desk and shaking his finger at his fellow justices in eloquent harangues.

“Have we become so inoculated with prejudice of race,” Harlan asked, when the court upheld a ban on integration in private schools in Kentucky, “that an American Government, professedly based on the principles of freedom, and charged with the protection of all citizens alike, can make distinctions between such citizens in the matter of their voluntary meeting for innocent purposes simply because of their respective races?”

His critics labeled him a “weather vane” and a “chameleon” for his about-faces in instances where he’d once argued that the federal government had no right to interfere with its citizens’ rightfully owned property, be it land or Negroes. But Harlan had an answer for his critics: “I’d rather be right than consistent.”

Wealthy and accomplished, Robert Harlan died in 1897, one year after his brother made his “Great Dissent” in Plessy v. Ferguson. The former slave lived to be 81 years old at a time when the average age expectancy for black men was 32. There were no records of correspondence between the two brothers, only confirmations from their respective children of introductions to each others’ families and acknowledgments that the two brothers had stayed in contact and had become Republican allies throughout the years. In Plessy, the Supreme Court upheld the constitutionality of Louisiana’s right to segregate public railroad cars by race, but what John Harlan wrote in his dissent reached across generations and color lines.

The white race deems itself to be the dominant race in this country. And so it is, in prestige, in achievements, in education, in wealth, and in power. So, I doubt not, it will continue to be for all time if it remains true to its great heritage and holds fast to the principles of constitutional liberty. But in view of the Constitution, in the eye of the law, there is in this country no superior, dominant, ruling class of citizens. There is no caste here. Our Constitution is colorblind and neither knows nor tolerates classes among citizens.

In respect of civil rights, all citizens are equal before the law. The humblest is the peer of the most powerful. The law regards man as man and takes no account of his surroundings or of his color when his civil rights as guaranteed by the supreme law of the land are involved. It is therefore to be regretted that this high tribunal, the final expositor of the fundamental law of the land, has reached the conclusion that it is competent for a state to regulate the enjoyment by citizens of their civil rights solely upon the basis of race.

The doctrine of “separate but equal” persisted until 1954, when the court invalidated it in Brown v.  Board of Education; during that half-century, Jim Crow laws blocked racial justice for generations. But John Harlan’s dissent in Plessy gave Americans hope. One of those Americans was Thurgood Marshall, the lawyer who argued Brown; he called it a “bible” and kept it nearby so he could turn to it in uncertain times. “No opinion buoyed Marshall more in his pre-Brown days,” said NAACP attorney Constance Baker Motley. 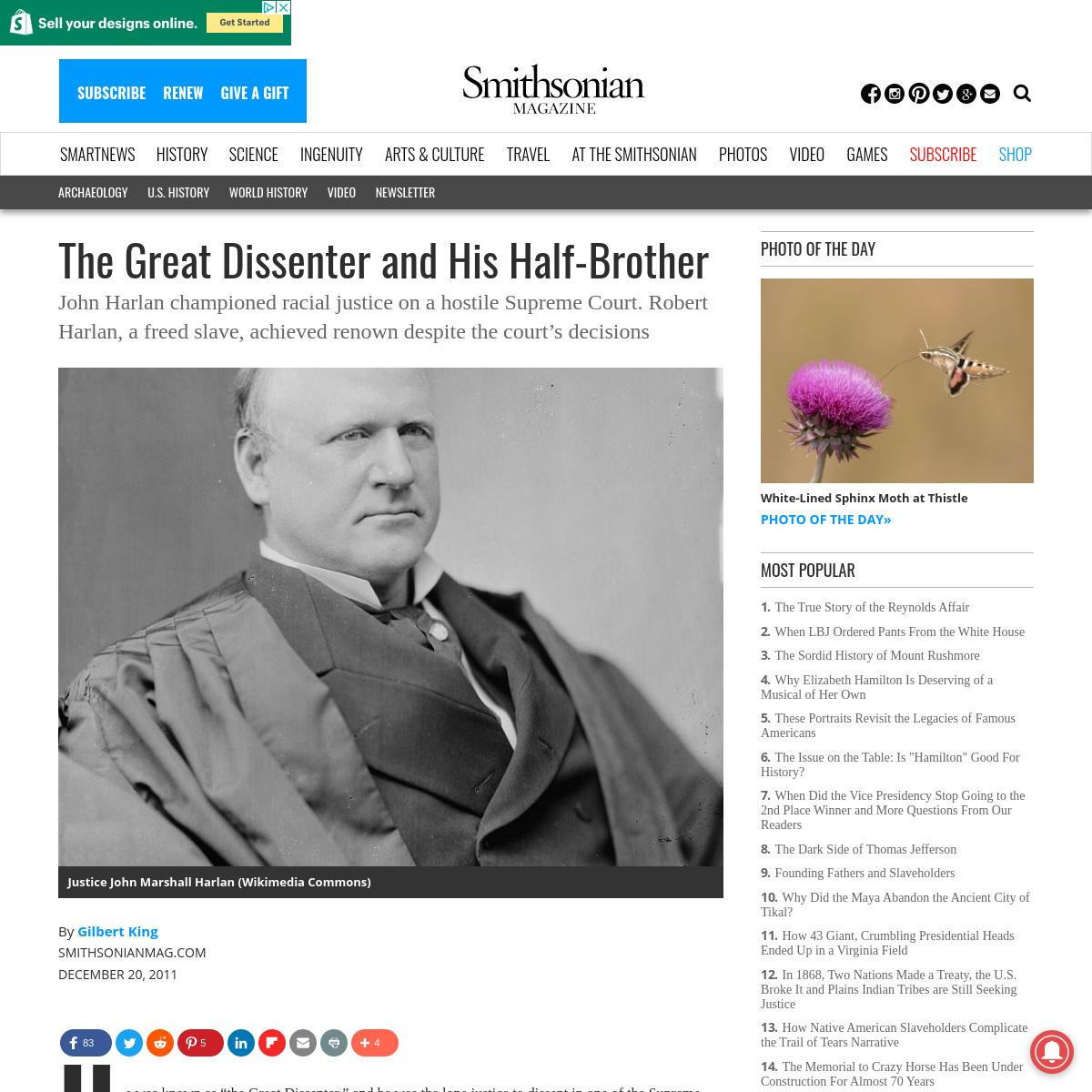