Why this 14th-Century Chinese Artist Is Having a Rebirth
Description

In June 2011, a hanging scroll sold for $62.1 million at Poly auction house’s spring sale of ancient calligraphy and painting in Beijing, setting both a new world record for Chinese artwork at auction and the record for a painting by the 14th-century artist, Wang Meng.

The ink wash, Zhichuan Resettlement, ca. 1350, was attributed to Wang Meng, a Chinese literati who lived from 1308 to 1385 and is still revered as one of the renowned “four masters of the Yuan dynasty” (1271 -1368). The painting depicts a famous Taoist medical scientist of the East Jin dynasty (317 – 420 AD) moving his entire household on horseback across rocky terrain to the sacred Mt. Luofu to make elixirs and practice alchemy. (To this day the mountain is a forested park dotted with Taoist temples and tributes to the fourth-century scientist.) The painting, which also boasts seven poems by scholars, painters and poets, had been handed down for six centuries.

An arguably more significant work by the same artist can be seen in “Style in Chinese Landscape Painting: the Yuan Legacy,” a show currently on view at the Smithsonian’s Freer Gallery of Art.

Dwelling in Seclusion in the Summer Mountains, 1354, is confidently attributed to Wang Meng. It is a relatively small piece, in ink and color on silk, remounted as a hanging scroll. Beautifully painted with several distinct kinds of brushwork, it depicts a peasant walking on a tiny pedestrian bridge over the inlet of a lake, returning home from work. Hidden from his view are his wife and child, anxiously waiting on the deck of a modest house. Not far from the peasant, a scholar stands under a thatch roof in a lakeside pavilion.

“The fellow in the pavilion is the personification of either the artist or the patron, the recipient of the painting,” explains Stephen D. Allee, a curator of Chinese painting and calligraphy at the Freer, who organized the current exhibition. “He is the subject of the title of the painting.”

The tiny buildings and figures are in the lower third of the painting; they are dwarfed by majestic, steep forested slopes in the middle ground and a range of tall misshapen, even grotesque, mountains that recede in the mist in the distance.

Landscape painting is one of the most prized traditions in Chinese culture and dates to the third century. The current exhibition focuses on the Yuan dynasty because several new key styles emerged at that time, a turbulent era when the Mongols came to power in China, the first time foreigners had occupied the country. (The conqueror was the brutal Kublai Khan, grandson of Genghis Khan.)

The great painters of the time, members of the literati class, resisted serving under the Yuan court and defiantly removed themselves to work and reside in the countryside. They exclusively painted landscapes, which they believed to be the visible key to the invisible reality, Allee says. “No longer viewed as a simple representation of the external world,” he adds, “landscape became a form of self-expression full of personal connotations for both artist and viewer.”

These artists were creating art for themselves and each other, instead of the court. “They restricted their acquaintanceships to other gentlemen scholars,” Allee explains. Wang Meng was the youngest of the “four masters” and least famous in his day, but he greatly influenced the painters of later generations—and not just painters. He has even inspired fiction. Last year John Spurling, the English writer, employed Wang Meng as the central character in his novel, The Ten Thousand Things.”

And his life story is fascinating. The grandson of another famous painter, Zhao Mengfu, who had Song royal blood, Wang Meng “identified with Chinese culture, not the cosmopolitan Mongols,” Allee says. “This was a matter of choice at a certain level and a matter of identity.”

He was from an “artistic family of great prominence” that had produced generations of painters—and collectors. As Allee explains, “Not only was painting a family tradition, but he had old paintings that were available to study and copy. Art was part of the family ambiance. They had great status in the artistic world.”

But how did he actually learn to paint? “Clearly there was some kind of instruction going on in the house, though we don’t have clear descriptions of how it was done, just that there was a high level of exposure to art in the family.”

Wang Meng was in his 40s when he did this painting. He had spent years learning about “what effects you can get from certain material, particularly the ink, as it spreads or holds fast on the surface,” Allee says. “And he had different brushes at his disposal, with hairs of goat, deer, rabbit and sable. Some had a harder core of hair of one kind and softer hair on the exterior. Old brushes were used to create a streaking effect.”

Surviving works by Wang Meng are incredibly rare. Dwelling in Seclusion in the Summer Mountains is his earliest dated piece, which makes it even more significant. It is also a showcase of the artist’s technical skills. “He is showing off what he can do,” Allee says. “Chinese artwork is always about the art of painting as much as anything else.”

It is a dense picture, full of nervous energy. The vertical composition is a rugged landscape dominated by craggy mountain crests that recede into the misty distance. They are formed by a technique Allee calls “hemp-fiber brushstrokes," because the long, overlapping lines resemble strands of rope. Flecks of dark ink represent boulders on the ridges. He used brushwork to differentiate kinds of trees: weeping willow, pine and various deciduous trees.

“There are five different kinds of trees, each distinct in terms of leaves and roots,” Allee points out. “Wang Meng is making things more complex, more varied, putting more definition into it.” There is a lot going on.

It is worth noting that the human element—the buildings and figures—are completely dwarfed by nature. They are quietly integrated into the bottom third of the landscape and do not immediately attract the viewer’s attention.

“It’s all about identification with landscape and the simple life of the peasant as seen from the vantage point of the artist,” Allee says. “It’s part of Daoism and the yearning for nature.”

The piece is also Wang Meng’s conscious tribute to the style of the 10th-century artists Dong Yuan and Juran. “They were neglected after the Song dynasty, so Wang Meng is “rediscovering their style and reinvesting them with significance,” Allee says.

It is common for Chinese artists to look back to past generations for inspiration. Similarly, Wang Meng was not particularly admired during his own time but was rediscovered later on. “He greatly influenced later painters, but not immediately,” Allee says.

Wang Meng lived long enough to see the Ming dynasty come to power and ultimately become a victim of that reign. It is not known precisely why, but he was imprisoned for five years and died in prison. His legacy lives in incredible paintings like Dwelling that are being discovered yet again.

“Pioneered by the 10th-century artists Dong Yuan and Juran, this once-neglected style had been revived in the Yuan dynasty by Wang’s older contemporaries,” Allee writes in the exhibition notes. “The visual profusion of the composition became a hallmark of Wang’s approach and strongly influenced later generations.”

The Freer Gallery possesses one of the most important collections of Chinese painting outside Asia, with many of its works from the Song and Yuan dynasties holding near-iconic status. Many of these works are available in the Song and Yuan Dynasty Painting Collection. The exhibition, "Style in Chinese Landscape Painting: The Yuan Legacy," is on view through May 31, 2015. 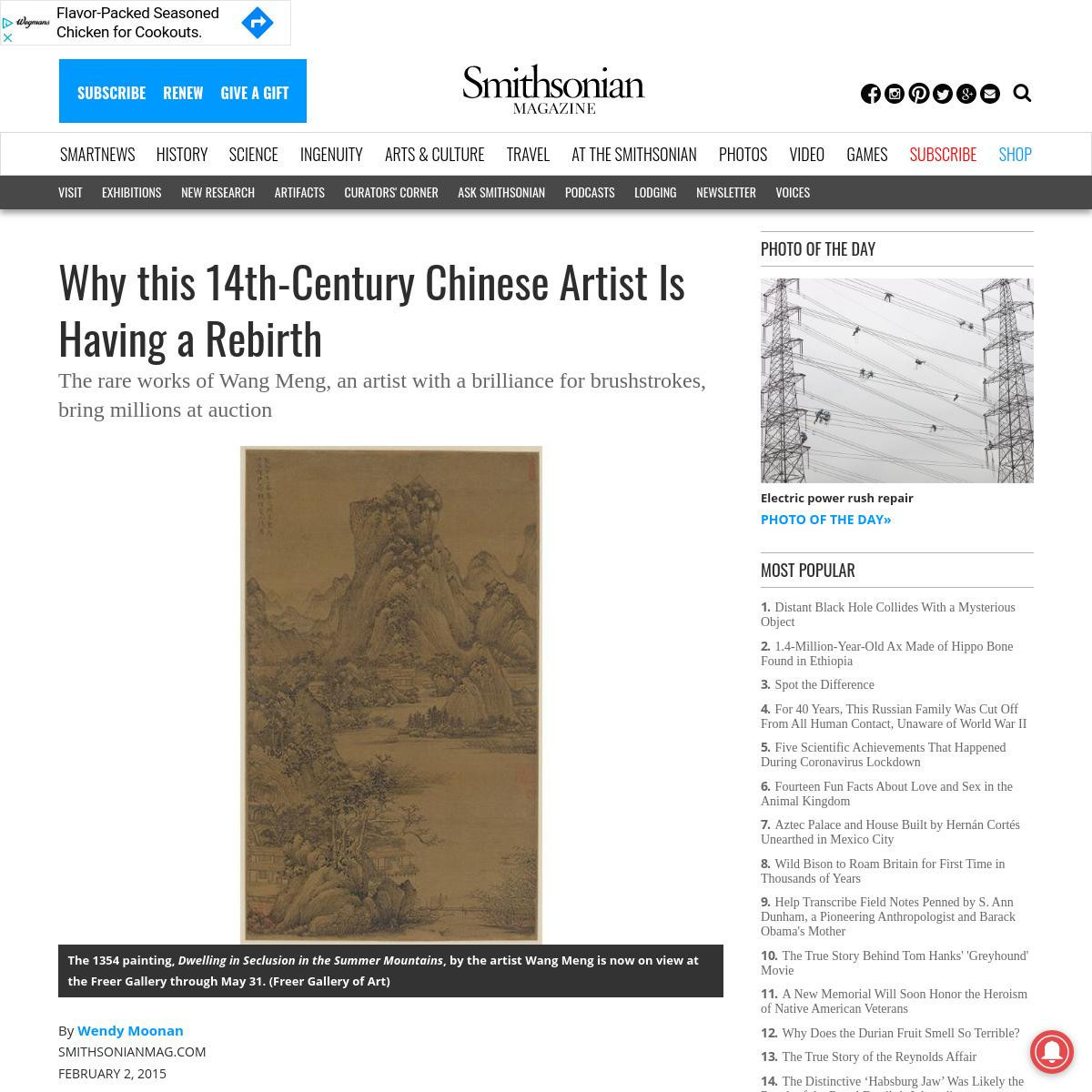