In the best tradition of skulduggery, claim and counterclaim, foosball (or table football), that simple game of bouncing little wooden soccer players back and forth on springy metal bars across something that looks like a mini pool table, has the roots of its conception mired in confusion.

Some say that in a sort of spontaneous combustion of ideas, the game erupted in various parts of Europe simultaneously sometime during the 1880s or ’90s as a parlor game. Others say that it was the brainchild of Lucien Rosengart, a dabbler in the inventive and engineering arts who had various patents, including ones for railway parts, bicycle parts, the seat belt and a rocket that allowed artillery shells to be exploded while airborne. Rosengart claimed to have come up with the game toward the end of the 1930s to keep his grandchildren entertained during the winter. Eventually his children’s pastime appeared in cafés throughout France, where the miniature players wore red, white and blue to remind everyone that this was the result of the inventiveness of the superior French mind.

There again, though, Alexandre de Finesterre has many followers, who claim that he came up with the idea , being bored in a hospital in the Basque region of Spain with injuries sustained from a bombing raid during the Spanish Civil War. He talked a local carpenter, Francisco Javier Altuna, into building the first table, inspired by the concept of table tennis.  Alexandre patented his design for fútbolin in 1937, the story goes, but the paperwork was lost during a storm when he had to do a runner to France after the fascist coup d'état of General Franco. (Finesterre would also become a notable footnote in history as one of the first airplane hijackers ever.)

While it’s debatable whether Señor Finisterre actually did invent table football, the indisputable fact is the first-ever patent for a game using little men on poles was granted in Britain, to Harold Searles Thornton, an indefatigable Tottenham Hotspur supporter, on November 1, 1923. His uncle, Louis P. Thornton, a resident of Portland, Oregon, visited Harold and brought the idea back to the United States and patented it in 1927. But Louis had little success with table football; the patent expired and the game descended into obscurity, no one ever realising the dizzying heights it would scale decades later.

The world would have been a much quieter place if the game had stayed as just a children’s plaything, but it spread like a prairie fire. The first league was established in 1950 by the Belgians, and in 1976, the European Table Soccer Union was formed. Although how they called it a ‘union’ when the tables were different sizes, the figures had different shapes, none of the handles were the same design and even the balls were made of different compositions is a valid question. Not a unified item amongst them.

The game still doesn’t even have a single set of rules – or one name. You’ve got langirt in Turkey, jouer au baby-foot in France, csocso in Hungary, cadureguel-schulchan in Israel, plain old table football in the UK, and a world encyclopedia of ridiculous names elsewhere around the globe. The American “foosball” (where a player is called a “fooser”) borrowed its name from the German version, “fußball”, from whence it arrived in the United States. (And, really, you can’t not love a game where they have a table with two teams made up only of Barbie dolls, or that is played in tournaments with such wonderful names as the 10th Annual $12,000 Bart O’Hearn Celebration Foosball Tournament, held in Austin, Texas, in 2009.)

Foosball re-arrived on American shores thanks to Lawrence Patterson, who was stationed in WestGermany with the U.S. military in the early 1960s. Seeing that table football was very popular in Europe, Patterson seized the opportunity and contracted a manufacturer in Bavaria to construct a machine to his specification to export to the US. The first table landed on American soil in 1962, and Patterson immediately trademarked the name “Foosball” in America and Canada, giving the name “Foosball Match” to his table.

Patterson originally marketed his machines through the “coin” industry, where they would be used mainly as arcade games. Foosball became outrageously popular, and by the late ’80s, Patterson was selling franchises, which allowed partners to buy the machines and pay a monthly fee to be guaranteed a specific geographical area where only they could place them in bars and other locations. Patterson sold his Foosball Match table through full-page ads in such prestigious national publications as Life, Esquire and the Wall Street Journal, where they would appear alongside other booming franchise-based businesses such as Kentucky Fried Chicken. But it wasn’t until 1970 that the U.S. had its own home-grown table, when two Bobs, Hayes and Furr, got together to design and build the first all-American-made foosball table.

From the perspective of the second decade of the third millennium, with ever more sophisticated video games, digital technology and plasma televisions, it’s difficult to imagine the impact that foosball had on the American psyche. During the 1970s, the game became a national phenomenon.

Sports Illustrated and “60 Minutes” covered tournaments where avid and addicted players, both amateur and professional, traveled the length and breadth of America following big bucks prizes, with the occasional Porsche or Corvette thrown in as an added incentive. One of the biggest was the Quarter-Million Dollar Professional Foosball Tour, created by bar owner and foosball enthusiast E. Lee Peppard of Missoula, Montana. Peppard promoted his own brand of table, the Tournament Soccer Table, and hosted events in 32 cities nationwide with prizes of up to $20,000. The International Tournament Soccer Championships (ITSC), with a final held on Labor Day weekend in Denver, reached the peak of prize money in 1978, with $1 million as the glimmering star for America’s top professionals to reach out for.

The crash of American foosball was even more rapid than its rise. Pac-man, that snappy little cartoon character, along with other early arcade games, were instrumental in the demise of the foosball phenomenon. The estimated 1000 tables a month that were selling around the end of the ’70s crashed to 100, and in 1981, the ITSC filed for bankruptcy. But the game didn’t die altogether; in 2003, the U.S. became part of the International Table Soccer Federation, which hosts the Multi-Table World Championships each January in Nantes, France.

But it’s still nice to know that even in a globalized world of evenrmore uniformity, table football, foosball, csosco, lagirt or whatever you want to call it still has no absolutely fixed idea of what really does constitute the core of the game. The American/Texas Style is called “Hard Court” and is known for its speed and power style of play. It combines a hard man with a hard rolling ball and a hard, flat surface. The European/French Style, “Clay Court” is exactly opposite of the American style. It features heavy (non-balanced) men, and a very light and soft cork ball. Add to that a soft linoleum surface and you have a feel best described as sticky. In the middle is European/German Style,  “Grass Court,” characterized by its “enhanced ball control achieved by softening of components that make up the important man/ball/surface interaction.” And even the World Championships use five different styles of table, with another 11 distinct styles being used in various other international competitions.

Until recently this dilettante approach to the tables and rulebooks also applied to the competitions. Up until a few years ago, Punta Umbrí in Huelva, Spain, hosted the World Table Football Cup Championship in August each year.Well, sort of.  It was played on a Spanish-style table and, according to Kathy Brainard, co-author with Johnny Loft of The Complete Book of Foosball and past president of the United States Table Soccer Federation, “If the tournament is run on a Spanish-made table and has the best players from wherever that table can be found, then it could honestly be called the World Championship of Foosball, on that specific table.” A bit of diplomatic looking down the nose there.

Brainard went on to say that the real championship, called the World Championship of Table Soccer, was played in Dallas on a U.S.-made table and offered $130,000 in prize money. Although, admittedly, that was before 2003, at which time the American associations had to accept the ignominy of being part of a truly international World Championship, and not simply be able to hold their own table football version of the baseball World Series.

In the general roly-poly of life, table football is mainly something that people play for fun in a smoky bar—at least they did before cigarettes were banned.

While British “foosers” might not be able to look forward to winning such large prizes as American players, they still take the game seriously. Oxford University is one of the top table football venues in England, with many highly thought of players on the national scene. Thirty college teams and one pub team play regularly on Garlando brand tables against other top pub and university sides.

Dave Trease is captain of Catz I (St. Catherine’s College, Oxford) who says his position as captain hangs on the fact that he has the only “brush shot” in the university.

“A brush shot is where you have the ball stationary and then you have to flick it very hard at an angle. To be honest, I think it’s more luck than anything, but it looks good when it works.” And he admits that his skills on the Garlando don’t travel.

“I’m rubbish on anything else! I’ve found something I’m good at, where I can have a laugh and not take it all too seriously. And you don’t get any table football hooligans either, although you’ve got to keep an eye on people greasing the ball or jamming the table.”

Ruth Eastwood, captain of Catz II, beat all her female opponents (all five of them anyway) to win the women’s event, ranking her fourth nationally. But having won the tournament, does she see big contracts being offered?

“I don’t think it’s likely, particularly when you take into account that my prize money was only £15 and the prizes for the whole competition were only £300. I don’t think we’re in the same league as the World Championships, but at least I can say I was women’s champion, even if there were only five other women!”

It's probably stretching the imagination just that bit too far to think that table football will every become an Olympic sport, but they probably thought the same about beach volleyball at one time. Sadly, the small figures that populate the field during playing time won't be able to collect the medals themselves. That will have to be left to the flick-wristed humans who control their every move. 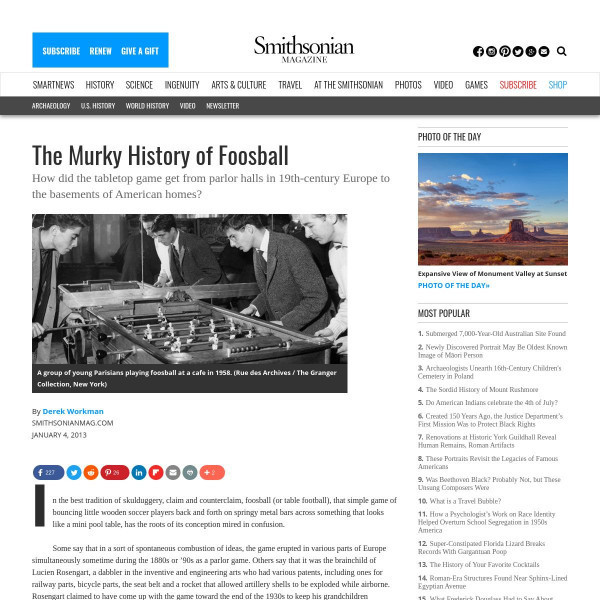