Change Author / Owner : Why Freshwater Dolphins Are Some of the World’s Most Endangered Mammals

Flipper, dolphin tattoos and the performing dolphins of SeaWorld all share one thing in common: the ocean. But although sea-loving dolphins dominate popular imagination, lesser known sentient cetaceans do, in fact, exist outside of salty waters.

They are the river dolphins, comprised of several species that are specially adapted to inhabit freshwater bodies around the world. Habitats include the Indus, Ganges, Brahmaputra, Mekong and Irrawaddy rivers in Asia, as well as South America’s Amazon river system.

River dolphins never rose to Flipper-esque fame, probably in part due to their rarity. While bottlenose dolphins are regularly sighted off the majority of the world’s coasts and are a staple of aquariums and zoos, all of the world’s freshwater dolphins are currently listed as either critically endangered or endangered. One, the Yangtze River dolphin from China, is almost certainly already extinct, as it hasn’t been spotted for about a decade.

When the Yangtze River dolphin disappeared, that event happened to quickly that researchers didn’t even have time to figure out what exactly caused its decline and eventual extinction. They suspected a combination of factors—including giant hydropower dams, ship traffic, pollution and accidental capture in fishing nets—played roles, but without scientific study before the species was lost they couldn’t be sure which of these things, if any, was most detrimental.

They undertook a number of activities to figure this out. They compiled historical dolphin sightings along the river, conducted interviews with older fishermen living in the dolphin’s former ranges, surveyed previous studies published in the scientific literature and assembled data about major construction events along the river.

They found that humans, not surprisingly, were the extreme home-wreckers behind the dolphins’ decline. From 1886 to 1971, a series of 17 gated, largely impassable dams were built along the river, essentially splitting the dolphin’s habitat into 17 disjointed sections. Some of those sections are regularly drained for agriculture, leaving them almost completely dry for months on end. In most fragments, the dolphins disappeared within 50 years following dam construction. Today, they can be found in just six of those sections.

The length of the river fragment that the dolphins lived in proved to be one of the most important factors for predicting whether they would still be around 50 to 100 years after those barriers were built. Likewise, the more water that flowed through those habitats, the better the chances the dolphins could make ends meet.

This finding “underlines the great importance of maintaining large sections of intact river habitat to sustain tropical aquatic biodiversity,” the researchers write in PLoS One.

Unexpectedly, some human activities that seem like obvious extinction culprits in fact played little if any role. Although more than 90 percent of industrial and municipal effluent that Pakistan dumps into its rivers is untreated, the authors point out that by the 1980s—the time Pakistan ramped up its industry and agriculture to the point that pollution was a major problem—the dolphins had already been missing from those river sections for years.

Likewise, until 2010, most fishing in the river took place in side channels rarely used by dolphins, meaning collisions with boats and entanglement in nets probably didn’t play a major role in the dolphins’ decline.

No plans are in motion to restore the Indus River to a healthy state, and the authors point out that that ecosystem serves as a warning to other nations that are considering damming Himalayan, Southeast Asian and other global rivers. “Hundreds of new dams and water developments are planned or are under construction in many of the world's rivers, and large losses of aquatic biodiversity can be expected," Gill Braulik, lead author of the study, said in a release.

As for the Indus River dolphins, their long-term survival is questionable. The authors’ model predicted that 100 years after being isolated by the dams, dolphin populations only have a 37 percent probability of survival. In other words, so long as the dams remain, the dolphins will probably never be completely free from the threat of extinction.

At the same time, people and the larger environment will continue to suffer, too. As the authors write, “The amount of habitat fragmentation and level of water withdrawals from rivers in Pakistan is extreme, negatively affecting human communities, eroding the delta, destroying fisheries and concentrating pollutants.” So the decline of Indus dolphins may also be a harbinger of worse things to come. 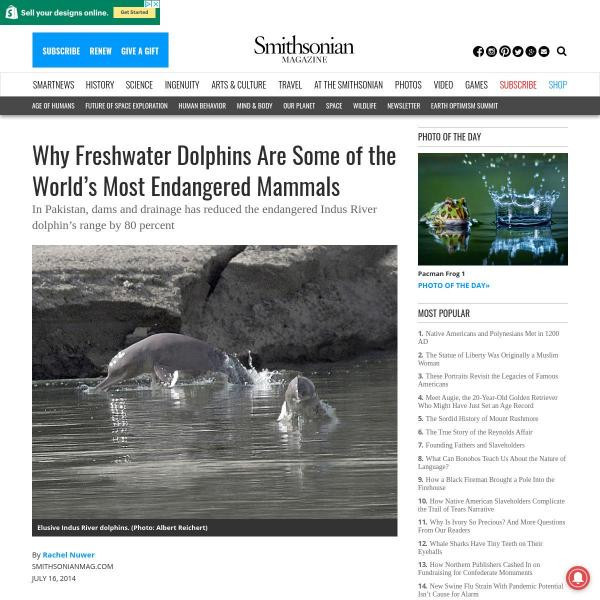