Dust kicks up on a hill in the distance. The pasture vibrates, taking the abuse of thousands of feet stamping into the ground. A crowd on the other side of the range feels the energetic air and cheers in approval. The first cowboy crests the hill, snapping his whip in the air, rearing back on his horse and hollering into the wind. Three more join him, yelling and cracking whips into the widening dust cloud. A buffalo charges through the dirty mist. The leader of the pack runs down the hill with 1,300 more buffalo behind him. The crowd screams in excitement.

Every fall, this scene is repeated in South Dakota’s Black Hills during the annual Buffalo Roundup, when about 60 volunteer cowboys and cowgirls ride across the 71,000-acre range, funneling the American Bison herd into pens for vaccinations and herd maintenance before the winter season arrives. The roundup is part of a larger event with an arts and crafts festival, live entertainment, and meals. Custer State Park, where the buffalo roam, was originally founded as a game preserve in 1914, with 36 buffalo on a protected range to prevent overhunting and loss of habitat. By the 1940s, the buffalo population grew to more than 2,500. A range management plan—the Buffalo Roundup—had to be instituted to keep control of the herd and its health. The first roundup was in 1966.

American Bison—named the national mammal earlier this year—haven't always had such booming numbers as they do here at Custer State Park. They were once nearly extinct from overhunting, but conservation efforts boosted the population to the current roughly 500,000 bison throughout the country. Custer State Park’s herd is one of the largest—second only to the herd at Yellowstone.

The Buffalo Roundup unofficially begins at 6:00 a.m. when a caravan of cars makes its way through Custer State Park to the viewing area. A pancake and sausage breakfast at 6:15 kicks off the festivities. The parking lots close at 9, and then you’re stuck until the entire herd is safely in the corrals, at about noon. Observers can either walk or take the shuttle bus to the viewing areas—the two hilltops overlook the corrals and the pasture the buffalo have their final charge through. When the show is over, most attendees eat an on-site lunch, then head out to the art festival.

Sometimes the roundup takes much longer than anticipated. Last year, the buffalo proved hard to catch. As soon as they’d arrive at the gates of the corral, the herd would linger for a moment, then about-face and run back up the way they came. The riders would turn and go after the buffalo, starting the entire process over again. Last year the herd tricked the riders four times. Each time, the crowd hollered and laughed in a joyous frenzy. It’s always more fun for the crowd when the buffalo tease the cowboys, one volunteer rider told Smithsonian.com.

Over the following four days, crews maintain the herd. They administer vaccinations to new-to-the-herd buffalo, brand the calves, check for pregnancy, and select about 200 to be sold at an auction in November. It’s all part of a management plan to keep a healthy balance between animals and available range.

“The annual roundup and working event is the one time each year that we handle the herd,” herd manager Chad Kremer tells Smithsonian.com. “The size of the herd must be managed so that the forage resource in the park is not overgrazed.”

When the roundup isn't in full swing, the buffalo live and graze year-round in Custer State Park. Kremer's responsibility extends throughout that entire time—he maintains the herd population, runs the park's annual auction, participates in the roundup and monitors the herd's health. About 14,000 people each year gather in the park to watch the show and, thanks to Kremer, get a little education about bison safety.

“There’s the selfie movement,” he told the Grand Forks Herald last year. “People want to get a picture, and they think they have to be within five or six feet. They’re big, and they’re furry, and they look kind of cumbersome, but they can run 35 mph, and I’ve seen that bull that weighs a ton jump over a five-foot fence.” Translation: Don't get too close to the buffalo, unless you're a trained rider.

Want to come see one of the nation’s largest buffalo herds in action? This year’s event is September 30. 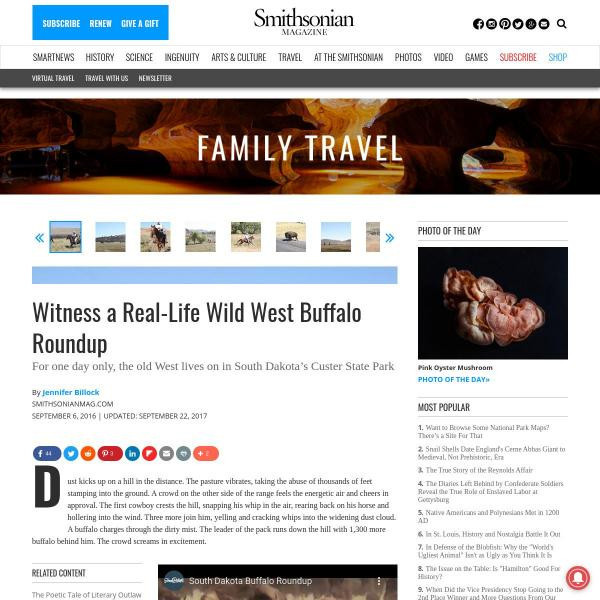