Change Author / Owner : Crowds Are Much Smarter Than We Suspected

If hell is other people, as Jean-Paul Sartre suggested, then going to a packed baseball game should be the worst kind of agony. Sartre’s line is often taken out of context—he was no misanthrope—but the view that people become uncivilized, mindless or stupid when they gather in large numbers is still widely held.

Sporting events can seem to reinforce that stereotype. After the Giants’ World Series victory last year, parts of San Francisco resembled a battle zone as thousands of raucous fans lit street bonfires, set off fireworks and hurled bottles at police. Given such events, the instinct of governments and law enforcement organizations is usually to try to control crowds—even if they are peaceful gatherings—lest they do something dangerous. Often, though, it is far better to let people regulate themselves and adapt to their environment, according to a growing body of evidence on the intelligence of crowds.

You can see crowd smarts in action just by watching pedestrians in a shopping mall, at a busy train station or walking down a congested street. Mehdi Moussaid, who studies collective behavior at the Max Planck Institute for Human Development in Berlin, has spent many research hours doing just that. He quickly discovered that traditional crowd models, which assume we move randomly like particles in a gas or fluid, are way off the mark. Instead, people in crowds display complex adaptive strategies and seem to exercise a collective intelligence.

For example, in one study his team found that groups of three or more pedestrians walking through a crowd often adopt a reverse-V formation when the crowd reaches a certain density, “because this is the only way for every group member to see all his friends with a simple head movement,” Moussaid says. He has also found that to avoid bumping into each other, pedestrians instinctively pass each other on the same side—either they all veer to their right or to their left.

Whether they pass to the right or left appears to depend on which country they are in. In most European countries, it’s to the right; in Japan, to the left. This suggests that “side preference,” as Moussaid calls it, correlates with driving rules—but that’s not always the case. In central London, where motorists drive on the left, people tend to filter to the right when using the stairs to underground train stations. It’s possible the high proportion of foreign tourists in the city center sets the rule, though on the streets throughout the city, the side preference is also to the right. The rest of the U.K. seems undecided, while the U.S. seems to differ from city to city.

How are these walking norms determined? This is Moussaid’s theory: “They arise mostly from a learning process. It’s a random process in the beginning. At first, people have no side preference and avoid equally on the left- or right-hand side, depending on the situation. Over repeating interactions, however, pedestrians tend to reproduce what they experienced in previous encounters. For instance, if I meet three people avoiding on the right-hand side, I will spontaneously avoid the fourth person on the same side. Because every pedestrian is learning in the same way, the norm will propagate from one individual to another, eventually leading to a collective consensus for the same side.”

This is a good illustration of how spontaneous self-organizing behavior can result in a highly efficient system. On very crowded walkways, people end up filtering into two opposing lanes, like a pedestrian highway—think of Fifth Avenue or Oxford Street on a Saturday afternoon. These flow relatively unhindered until someone gets bored with the slow pace and tries to overtake, at which point the lanes quickly shred into tangled ribbons and the order breaks down. This suggests that deviating from a crowd’s behavioral norms can be a bad idea: Crowds are intelligent, so long as they are cohesive. 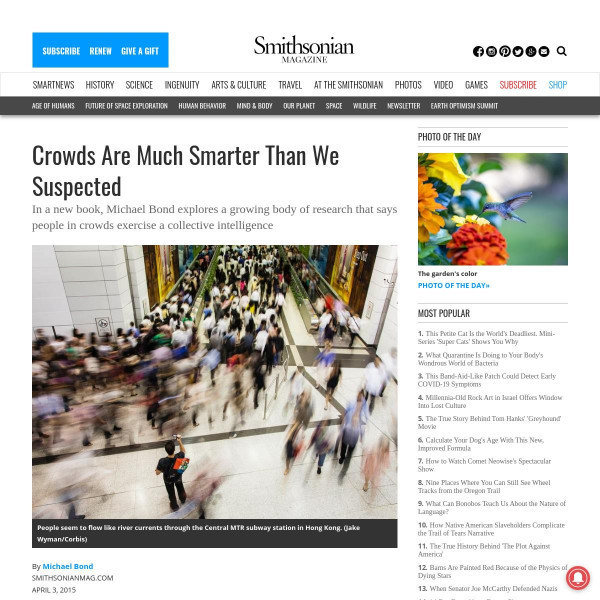