In October, 2011, Elizabeth MacDonald from NASA’s Goddard Space Flight Center noticed a spike in Tweets about the dazzling show put on by the aurora borealis, according to a NASA press release. It got her thinking—what if she could add geolocation data to all those social media hits and collect them in a single database?

MacDonald and a few colleagues launched the project the next month and began signing up citizen scientists on its website, asking them to keep tabs on when and where they experienced the ethereal glow of the northern and southern lights. Now, a new paper published earlier this month in the journal Space Weather, shows that the project is improving how researchers predict when and where skygazers can view that midnight glow.

After a large geomagnetic storm that hit the Earth around St. Patrick’s Day 2015 and few other smaller events, MacDonald and her team found that 60 percent of the 500 Aurorasaurus participants observed the dancing lights outside the range of visibility predicted by the Space Weather models. Researchers are using the data to produce a more accurate forecast engine.

Most current aurora forecasts are based off measurements of solar wind by NASA’s Advanced Composition Explorer Satellite, according to Betsy Mason at Wired.com. Since the satellite is so close to Earth, however, it only offers about an hour’s warning before geomagnetic events. The Aurorasauraus data won’t improve early detection, but NASA says over time it will help researchers understand how to predict when and where geomagnetic events occur and how intensely those events affect the earth.

In fact, Andrea Tapia, a professor of information science at Penn State and a member of the Aurorasaurus team, tells Laboratory News that she is investigating ways of using the network of citizen scientists as an early warning system for geomagnetic events. “We can watch the sun much more accurately than we can predict its effects on Earth 93 million miles away,” Tapia says in a press release. “Our goal is to collect new data from citizen scientists and crowdsourcing to allow actionable, up-to-the-minute understanding of auroral activity.”

But all of that is still a ways off. Until then, the project is mainly a great boon for sky watchers, with participants like Chris Ratzlaff in Calgary and Jason Grustra creating beautiful images while collecting data.

“The short term vision for Aurorasaurus is to become an interactive hub for aurora enthusiasts at the intersection of citizens and science,” MacDonald tells NASA. “Long term, this engaged community can be sustained and evolve together—and the tools can be expanded to be useful in other disciplines within our technological society.” 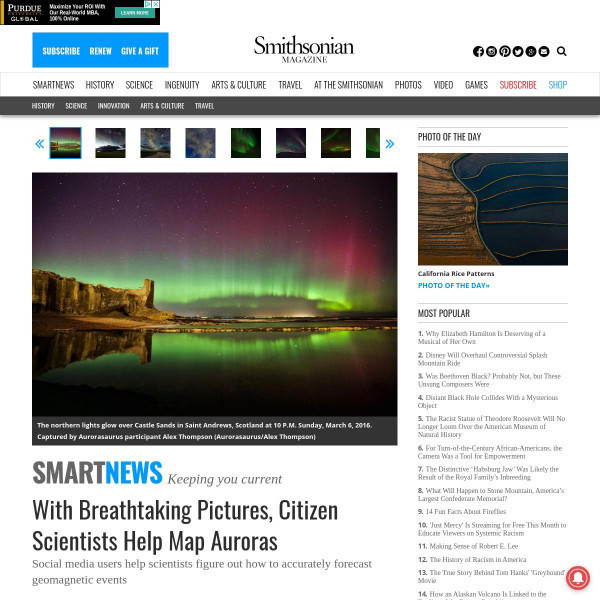