Photo courtesy of the Smithsonian Institution

As we reach day nine of the federal shutdown, it’s widely known that all 19 of the Smithsonian Institution’s museums are closed to the public due to the furloughs of all non-essential federal employees.

What’s less often discussed, though, is the fact that the Smithsonian is also an international research organization that employs hundreds of scientists—and consequently, the shutdown has impacted dozens of scientific projects across the U.S. and in far-flung locations around the world. Interrupting this work for even a short-term period, scientists say, can have lasting effects down the road, as in many cases, projects may have to be started anew due to gaps in data.

Because of the furloughs, many researchers and other personnel are unreachable (some may even face penalties for merely checking their e-mail), so collecting information is difficult. But here’s a partial list of Smithsonian research projects interrupted by the ongoing shutdown:

Paleontological work that involves 3D scanning of whale and other marine mammal fossils in Chile has been put on hold. Image via Nick Pyenson / NMNH

Nick Pyenson of the Natural History Museum has conducted fieldwork on every continent except Antarctica, excavating ancient fossils to understand the evolution of modern marine mammals. As part of his team’s current project, in Chile, they’re 3D scanning a particularly rich site that includes whale, penguin and seal fossils so scientists worldwide can study the digital data.

But last week, that work was abruptly halted. “The Smithsonian is closed, due to a federal government #shutdown. All Pyenson Lab social media, including coverage of the ongoing joint UChile expedition, will be suspended starting 12 pm EST (noon) today (1 Oct),” Pyenson wrote on Facebook. “Also, all federally funded Smithsonian employees are forbidden, under penalty of a $5,000.00 fine and up to 2 years in a federal prison, from logging into their SI email accounts. I will be out of contact until the federal government reopens.”

In 2011, Pyenson’s crew discovered a set of ancient whale fossils in the path of the Pan-American Highway and excavated them just in time. There might not be any looming highway projects currently, but leaving these precious fossils exposed to the elements still poses an enormous risk to their scientific value. The Very Long Baseline Array, a group of telescopes used by Smithsonian researchers, was shut down last week. Image via Wikimedia Commons/Cumulus Clouds

The Smithsonian Astrophysical Observatory, which partners with Harvard to operate and analyze data from dozens of astronomical telescopes, located both on the ground and in space, has managed to keep most of its facilities operating thus far. “You have to shutter federal buildings, but some of these aren’t technically federal buildings,” says David Aguilar, an SAO spokesman, noting that many telescopes, such as those at the Fred Lawrence Whipple Observatory in Arizona, are shared with local universities and are still staffed by skeleton crews comprised mostly of non-federal employees.

Many SAO researchers, though, depend on data that comes from a range of non-Smithsonian telescopes that have already been shut down. This group includes radio astronomer Mark Reid, who conducts research with the Very Long Baseline Array, a group of telescopes operated by the National Radio Astronomy Observatory that stretches all the way from Hawaii to New England and was closed last week. “This is really bad,” he told Science. “If they don’t operate the telescopes, it could mean a year’s worth of data becomes useless.” Research into animal behavior and genetics at the Zoo and Smithsonian Conservation Biology Institute has been halted. Image via the National Zoo

At the National Zoo, the Smithsonian Conservation Biology Institute in Front Royal, Virginia, and various research sites around the world, staff has been stripped down to the minimum level necessary to care for animals—and that means all of the research into how these animals behave and how their bodies function has been shut down.

“All of the scientists, with very few exceptions, have been furloughed,” says Steve Monfort, director of the SCBI. “So everything is shut down. All of our labs are closed, and dozens of projects have been put on hold.” This includes the Zoo’s endocrinology lab (which provides crucial services to dozens of zoos across the country to help them breed elephants and other animals) and the genetics lab (which analyzes biodiversity to sustain severely endangered species on the brink of extinction). “We’re pretty much dead in the water, as far as ongoing science work,” he says.

Additionally, some of these projects are conducted in some 35 different countries annually, so travel arrangements and international collaborations—such as a trip to China to study pandas and a Zoo team’s research into emerging infectious animal diseases in Uganda—have been delayed or cancelled.

“What the public sees when we put on displays is only the tip of the iceberg,” says David Ward, a curator at the National Portrait Gallery, which opened the (briefly) acclaimed exhibition “Dancing the Dream” the day before the shutdown. “There’s a tremendous amount of day-to-day work and research necessary to keep everything going, and we can’t do it right now. It’s very frustrating.”

Apart from designing exhibitions—a whole host of which will likely be delayed in opening, including the Sackler Museum’s exhibit on yoga in historic Asian art, the Hirshhorn’s “Damage Control,” a much-anticipated exhibition on the theme of destruction in contemporary at, and the American Art Museum’s “Our America” exhibition on Latino art—curators conduct research to expand knowledge in their fields. This work, too, has been interrupted by the shutdown.

Kristopher Helgen, the Natural History Museum curator and biologist who announced the discovery of the olinguito species to great fanfare in August, announced on Twitter today that he “had to turn away mammalogists from Oz, NZ, S Africa, Brazil, etc. Long way to come to find the collections closed.”

Because the majority of Smithsonian researchers and curators are furloughed and out of contact, what we currently know about interrupted science is only a small measure of the total effects of the shutdown. “I don’t have much information because, scientists are largely furloughed and silent,” says Kirk Johnson, director of the Natural History Museum. “The real impact of this will emerge once the lights are back on.” 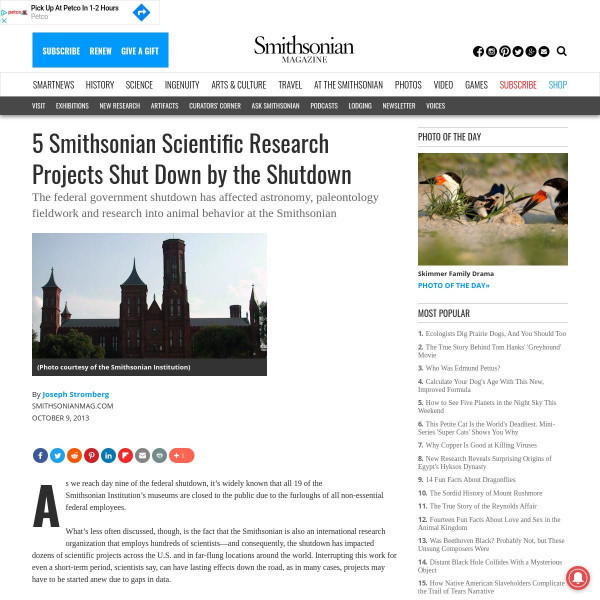