Waterways such as the Colorado River (above) are big contributors in the global carbon cycle. Photo by Peter Raymond/Nature

The world’s inland waterways move more than just water; they play a pivotal role in the global carbon cycle, soaking up carbon from the land and releasing it into the atmosphere as carbon dioxide. But are rivers or lakes bigger greenhouse gas contributors? A study published today in Nature finds that, cumulatively, rivers and streams release about five times more carbon dioxide than all the world’s lakes and reservoirs, even though the latter cover far more of the Earth’s surface.

Figuring out how much carbon dioxide these water bodies contribute to the carbon cycle is a complex task. Scientists have to determine the global surface area of the world’s lakes, streams, rivers and other water bodies. Then, they have to figure out how much carbon dioxide those bodies hold, and how quickly that carbon is transferred from water to atmosphere, a factor called the gas-transfer velocity. Uncertainties and a lack of data in all three areas have hamstrung efforts to determine exactly how much carbon inland waters are releasing.

To get better estimates, a team led by biogeochemist Peter Raymond of the Yale School of Forestry and Environmental Studies had to create more detailed data sets for all three parameters. They revised a census of lakes and reservoirs, and drew on data from sources as varied as space-shuttle missions and U.S. river monitors to determine the extents of global waterways. Inland waters are generally supersaturated with carbon dioxide, but how much carbon the waters hold differed by type. Gas-transfer velocities had been determined in earlier experiments; factors such as turbulence and lake size played a role in how quickly carbon dioxide moved through the system.

The researchers calculated that all the planet’s inland waters contribute about 2.1 gigatonnesof carbon to the atmosphere each year. Rivers and streams, which cover some 241,000 square miles (624,000 square kilometers) of the Earth, release about 1.8 gigatonnes of carbon each year. Another 0.32 gigatonnes come from lakes and reservoirs, which account for 1,200,000 square miles (3,000,000 square kilometers). These estimates were about twice as high as any done previously, the researchers note. However, the results are in line with detailed studies that have been done of places like the Amazon and temperate regions. To put this all in perspective, humans are expected to contribute about 36 gigatonnes of carbon to the atmosphere in 2013.

“Understanding the relative importance of these sources is crucial to the global carbon budget,” the researchers write. “A flux of 1.8 for streams and rivers is large considering their small surface area, reinforcing the concept that streams and rivers are hotspots for exchange.” In addition to giving researchers a better overall picture, the study highlights locations that are the biggest contributors of carbon dioxide released through rivers, such as Southeast Asia, the Amazon, Europe and southeast Alaska.

There are still uncertainties in these calculations, however. The researchers left out the world’s wetlands because, with their vegetation, they function in a very different manner than open bodies of water–a wetland’s canopy can alter the movement of carbon dioxide into the atmosphere. There’s also a need for even better data than is currently available. “Because tropical regions are seriously under-represented in global data sets, additional studies of carbon concentrations in the predicted hotspot areas in the tropics are urgently needed,” Bernhard Wehrli, a biogeochemist at the Swiss Federal Institute of Technology in Zurich, writes in an accompanying News & Views article.

Plus, Wehrli notes, humans have been altering waterways for hundreds of years—damming them, draining them, channeling them. Some of these constructions, such as turbine releases associated with dams, along with natural features such as waterfalls, can be places of high gas emission. Others, such as human-made channels and drained wetlands, have produced such altered systems that they act very differently from the natural systems on which models of carbon budgets are based.

These uncertainties, however, give much food for thought. Do certain agricultural practices promote the transfer of carbon to rivers, which then escapes into the atmosphere as carbon dioxide? How much does the unnatural alteration of our waterways contribute to the amount of carbon dioxide released by rivers? Answering these questions will help scientists understand the degree to which human behavior is increasing greenhouse gas emission rates, giving us a fuller picture of the causes of human-induced climate change and where efforts to reduce carbon emissions might have the greatest effect. 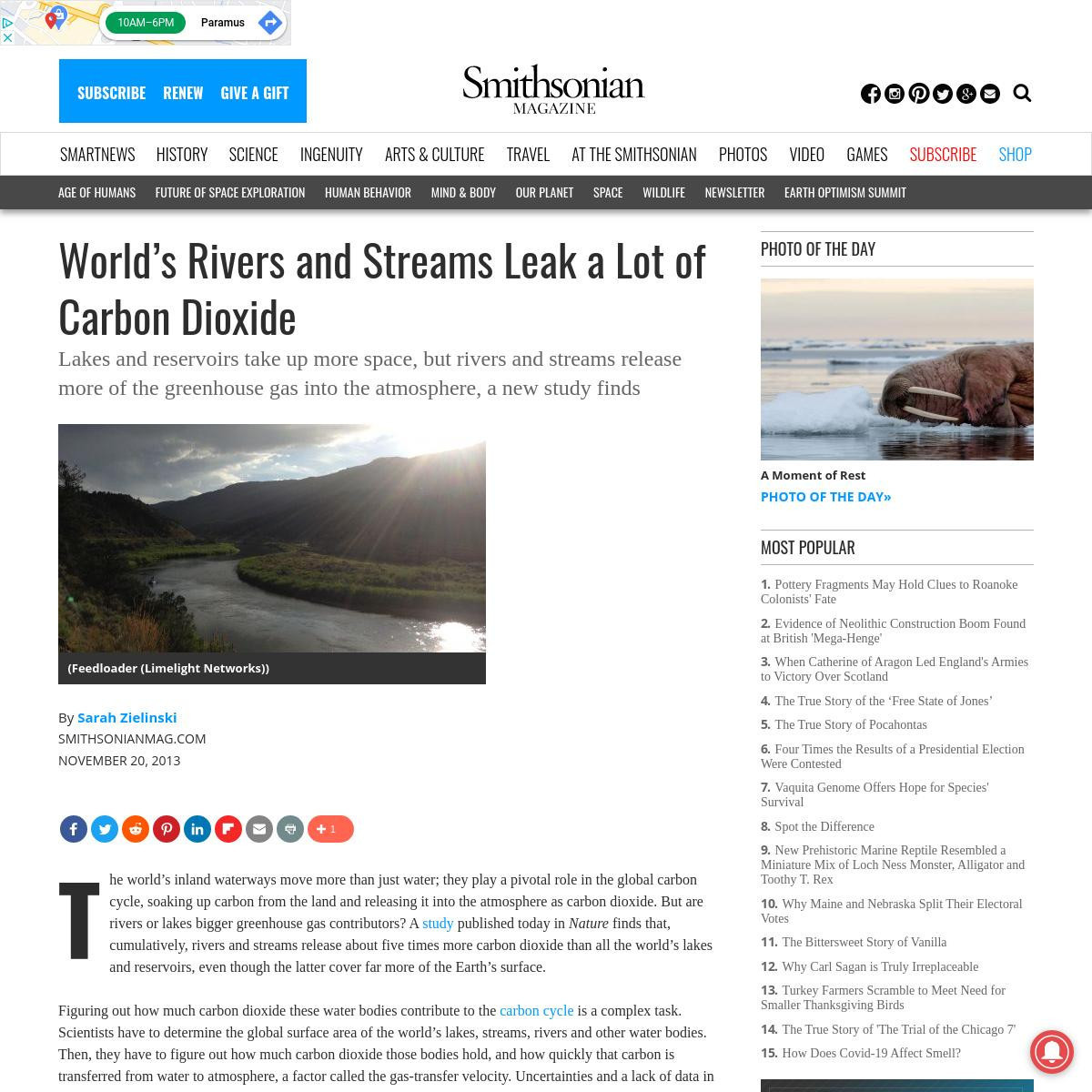