Change Author / Owner : What Would a Cross Between a Polar Bear and a Grizzly Really Look Like? The polar bear (left) and grizzly (right) have been known to mate. © Nickolay Lamm/Business Insider. There have been some interesting creatures popping up in the Arctic. Canadian hunters have found white bears with brown tints—a cross between Ursus maritimus, the polar bear, and Ursus arctos horribilis, the grizzly. A couple of decades ago, off the coast of Greenland, something that appeared to be half-narwhal, half-beluga surfaced, and much more recently, Dall’s porpoise and harbor porpoise mixes have been swimming near British Columbia.

In “The Arctic Melting Pot,” a study published in the journal Nature in December 2010, Brendan Kelly, Andrew Whiteley and David Tallmon claim, ”These are just the first of many hybridizations that will threaten polar diversity.” The biologists speculated a total of 34 possible hybridizations (pdf). Arctic sea ice is melting, and fast—at a rate of 30,000 square miles per year, according to NASA. And, some scientists predict that the region will be ice-free within about 40 years. “Polar bears are spending more time in the same areas as grizzlies; seals and whales currently isolated by sea ice will soon be likely to share the same waters,” says Kelly and his colleagues in the study. Naturally, there will be some interbreeding.

Such mixed offspring are hard to find. But, thanks to technology and the creative mind of artist Nickolay Lamm, they’re not hard to envision. Say a harp seal (Phoca groenandica) mates with a hooded seal (Cystophora crostata), or a bowhead whale (Balaena mysticetus) breeds with a right whale (Eubalaena spp.). What would the offspring look like? Dina Spector, an editor at Business Insider, was curious and posed the question to Lamm.

This past spring, Lamm, who creates forward-looking illustrations from scientific research, produced scenes depicting the effect of sea level rise on coastal U.S. cities over the next few centuries, based on data reported by Climate Central, for the news outlet. Now, building off Spector’s question, he has created a series of digitally manipulated photographs—his visions of several supposed Arctic hybrids. “In that Nature report, it was just a huge list of species which could cross breed with one another. I feel that images speak a lot more,” says Lamm. “With these, we can actually see the consequences of climate change.”

Lamm first selected several of the hybridizations listed in the study for visual examination. He then picked a stock photo of one of the two parent species (shown on the left in each pairing), then digitally manipulated it to reflect the shape, features and coloring of the other species (on the right). Blending these, he derived a third photograph of their potential young.

To inform his edits in Photoshop, the artist looked at any existing photographs of the crossbred species. “There are very, very few of them,” he notes. He also referred to any written descriptions of the hybrids and, enlisting the help of wildlife biologist Elin Pierce, took into account the dominant features of each original species. In some cases, Lamm took some artistic merit. He chose to illustrate the narwhal-beluga mix, for example, with no tusk, when Pierce suggested that the animal may or may not have a very short tooth protruding from its mouth.

It is possible that the harbor seal (left) and the ringed seal (right) will mate. © Nickolay Lamm/Business Insider. The artist’s vision for what a harbor and ringed seal hybrid might look like. © Nickolay Lamm/Business Insider.

Biologists are concerned about the increasing likelihood of this crossbreeding. “As more isolated populations and species come into contact, they will mate, hybrids will form and rare species are likely to go extinct,” reports Nature.

Many critics of Lamm’s series have argued that these hybrids may just be a product of evolution. But, to that, Lamm says,”Climate change is a result of us humans and not just some natural evolution that would happen without us.”

About the project itself, he adds, “I am personally concerned about the environment, and this is just my way of expressing my worry about climate change.” 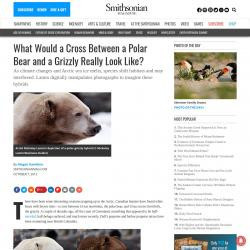