Saul Griffith’s Fascinating Ideas About the Future of Energy
Description

Saul Griffith, founder and CEO of Otherlab, has a habit of building cool things, from a kite-like wind turbine to a smart rope that can sense strain and report frays. The MacArthur Foundation, which awarded Griffith a “genius” grant in 2007, has called him “a prodigy of invention in service of the world community.”

Griffith’s latest venture, Otherlab, is a research company reminiscent of the “invention factory” created by Thomas Edison. It operates in a former pipe organ factory in San Francisco, where redwood bannisters, multi-paned windows, scattered organ parts and plenty of machinery create the sense that a 19th-century inventor like Edison might feel perfectly at home tinkering in the lab’s sunlit rooms.

Among several projects in the works here are two energy technologies that could unlock a future of cheap solar power and mainstream natural gas cars. “The ultimate environmental problem to work on,” Griffith says, “is the way we create energy and use energy.”

In an upstairs room, just past a large, inflatable boxing robot, an Otherlab team is working on a new way to tilt mirrors for concentrating sunlight at large solar plants. The design positions a mirror atop plastic containers, which stretch and scrunch—but don’t buckle—as their internal pressure is adjusted using compressed air. The idea is to cut costs by using plastic and air to aim small mirrors instead of the motors and steel typically used today to tilt billboard-sized mirrors.

For natural gas cars, Griffith’s team wants to eliminate the bulky, cumbersome, and expensive fuel tanks used in natural gas cars today. Otherlab’s solution takes long, thin tubes and bends them like intestines into tightly packed shapes that conform to the available space in a vehicle. The company has received a $250,000 grant from the Department of Energy’s ARPA-E program for moonshot energy projects to develop the design over the past year.

Griffith has pursued energy inventions that seem like long shots before. In 2006, he co-founded a company called Makani Power, which devised an airborne wind turbine. Tethered like a kite at the end of a string, an aircraft flies in circles at high altitude. Wing-mounted rotors capture the rushing wind and convert it to electricity using small generators. The tether transmits this electricity to a station on the ground.

Griffith spoke with Smithsonian.com about the ingredients for energy innovation, why he’s excited about natural gas cars, and his vision for a massive network of small labs.

When did you start thinking about applying your skills toward energy problems?

The focusing moment probably came after I started Makani Power, which was a wind energy company. It was difficult to convince people why it was worthwhile doing this crazy sounding technology: We’re going to fly 767s at the ends of pieces of string and generate electricity from wind 5,000 feet up. Everyone just looks at you like you’re a space alien.

We knew it was totally possible and have now proven that it’s possible and in fact, we’re doing it. But in the early days, you need a lot of money to do these types of energy technologies. And when you’re trying to convince people to give you that money, you need a very good story. So that made me contextualize just how much transformation the energy system needs at the civil infrastructure level to meet the needs of climate change.

Tell me about the team and environment you’ve cultivated here at Otherlab. How are they helping to further those larger goals?

We’re about 25 people. We’re right in the middle of urban San Francisco. We have about 95 percent walking or bicycling commuters to work. So we’re a low-carbon office, just in terms of the transportation we use.

We have a number of projects—two specifically in the energy space right now. We would like to have a dozen, partly because we’ve done so much research on how we use energy and how we create it, that we have this nice database of where technical contributions can be made to change that.

There are really two classes of solar energy generation: One is photovoltaics; the other is concentrated solar thermal, which means you heat something up and turn that heat into electricity [through] a turbine or some similar mechanism. We are working on a heliostat technology—which means a mechanism for following where the sun is in the sky—that will make photovoltaics more efficient, because the photovoltaics will be more ideally oriented towards the sun. You get about 20 or 30 percent more energy out of the same solar cell if you can cheaply track it.

Is most of that cost in the materials, or in some advanced technology?

For all energy technologies, they are at such enormous scales that really the cost of the machines is somewhat equivalent to their weight. Anything you can do to make them lighter weight or more efficient means a very high cost reduction. Because they’re all made out of commodity materials: silicon, aluminum, and steel, and carbon—these are cheap bulk materials. You have to use them efficiently to cover vast surface areas. So we end up winning because we use a lot less material to point the same amount of light, and we use even cheaper materials and manufacturing processes.

We’re also working on making natural gas tanks for substitutions for petroleum or gasoline tanks for cars and light trucks. Per mile, if you give me the same car, and I have a natural gas motor in one and a gasoline motor in the other, the natural gas car will produce about 25 percent less carbon per mile traveled. The only thing that would change that is if there are methane leaks in the extraction process.

Which there are, right?

There absolutely are. If you have 3 to 4 percent parasitic leaks from the wellhead, then it’s net-zero better than gasoline.

Nevertheless, I’m super excited about it. I think the role of engineers in society is to provide technology options for society to choose yes or no. And as much as engineers would like to be the judge, jury, and executioner, we have to work with what society wants. So, I believe it’s worth developing this capacity because I think we can solve the wellhead problems of natural gas. I think it’s very important to have higher energy independence, so you have to weigh the moral conundrum of fracking, versus the moral conundrum of fighting oil wars in foreign nations.

The same technology that we’re developing in those tanks is also useful for large-scale compressed air and compressed steam energy storage. So we’re creating a technological capacity that’s useful in other domains in energy.

How did you decide to approach the problem of natural gas cars from this particular angle, with tanks that can be conformed to the shape of a car?

Within this building, we happen to be very good at geometry and computational geometry, and some arcane areas of mathematics, such as space-filling curves. Turns out, we were also do a lot of work on pressure vessels, because we were working on inflatable objects for a long time.

Through serendipity (I think we should ascribe a lot more of society’s invention to serendipity than to anything else) just because we were thinking about energy and space-filling curves and pressure vessels, this all came together. Because you needed to sort of be aware of those three things to have the insight to produce the particular new technology tanks that we’re doing. In some respects, every project in the building has an origin that’s serendipitous like that.

You’ve written recently about the value of a research model based on a multiplicity of small, independent labs. Would you explain that?

The two world wars and the success of the Manhattan Project and the Apollo mission kind of convinced everyone to centralize all the R&D resources into a set of national laboratories and into universities. Elite universities would become research universities.

I’m not saying that’s terrible. That has produced a lot of really good work. But we did it at the expense of small independent labs. Now we live in an age where collaboration across distance is very easy because of the Internet. Tools are cheaper than ever. And I think it’s time to ask the question: Is this way that we allocate society’s research resources as good as it could be? Meaning that we largely spend it at universities and in national labs.

I would love to see many, many more small labs because I think small teams of people are where the real innovation happens. And geographic diversity—having more people thinking about their local specific problems, in the context of the general research that society needs to do—would be really useful.

Where do you think the most exciting energy innovation is happening now?

In the energy space, the most exciting things are nearly all happening in little startups, I think, and well, big startups—I think Tesla is doing a great job. I think Makani now at Google [Google acquired Makani in May] is doing really interesting stuff in wind. I think there’s a bunch of interesting private companies doing biofuels research. I’m not a huge fan of biofuels, but I’m glad that they’re doing it and they’re doing work well.

The list is sadly short. Not a lot of kids grow up thinking, “Oh energy is the problem I want to work on.” Everyone wants to solve the climate problem, but very few teenagers are aware that you solve that by solving the way that we produce and use energy. I would like, for my four-year-old son and my newborn daughter’s sake, more good energy research.

You came to California from Sydney, Australia, by way of Cambridge, England. What brought you here, and what keeps you here?

I think the honest version is wanderlust— you know, spirit of adventure, travel the world and see where the winds take me. But if I did revisionist history, or thought about what was the magnetic pull that made me wind up in California, I could not do what we are doing in this building in Australia. Australia does not have the R&D funding or the culture of research and development that would enable this. It would be difficult to find the set of talent that we have in this building in Australia.

Sadly, I think America’s at risk of losing both of those advantages. And they are huge advantages. Technology is really the frontier—it drives economic progress. America has won the last century because it had the best people. Think of the Manhattan Project—it was largely Eastern Europeans who did the physics and the math and the engineering. They were imports; same for the Apollo mission; same for a huge number of things.

America has traditionally pulled in the best and brightest people from the entire world and put them to creative effort in the interest of America. But due to security paranoia and immigration concerns, America is dropping the ball on that.

Would you say you’re optimistic that the world’s energy problems can be solved?

I spent more than a year being quite depressed about this fact. Then I had my child and I realized, you know, the environmental future does not look as good for him as it did for me. It has shifted in my generation, and the Baby Boom generation before me.

You still have to be in the game. It’s worth fighting for the things, the world that you would like to create. Hopefully we’re just proving that you can do that, and we’ll get more people fighting on the side of solutions. I think that’s the best you can hope for. Maybe we’ll pull it off. 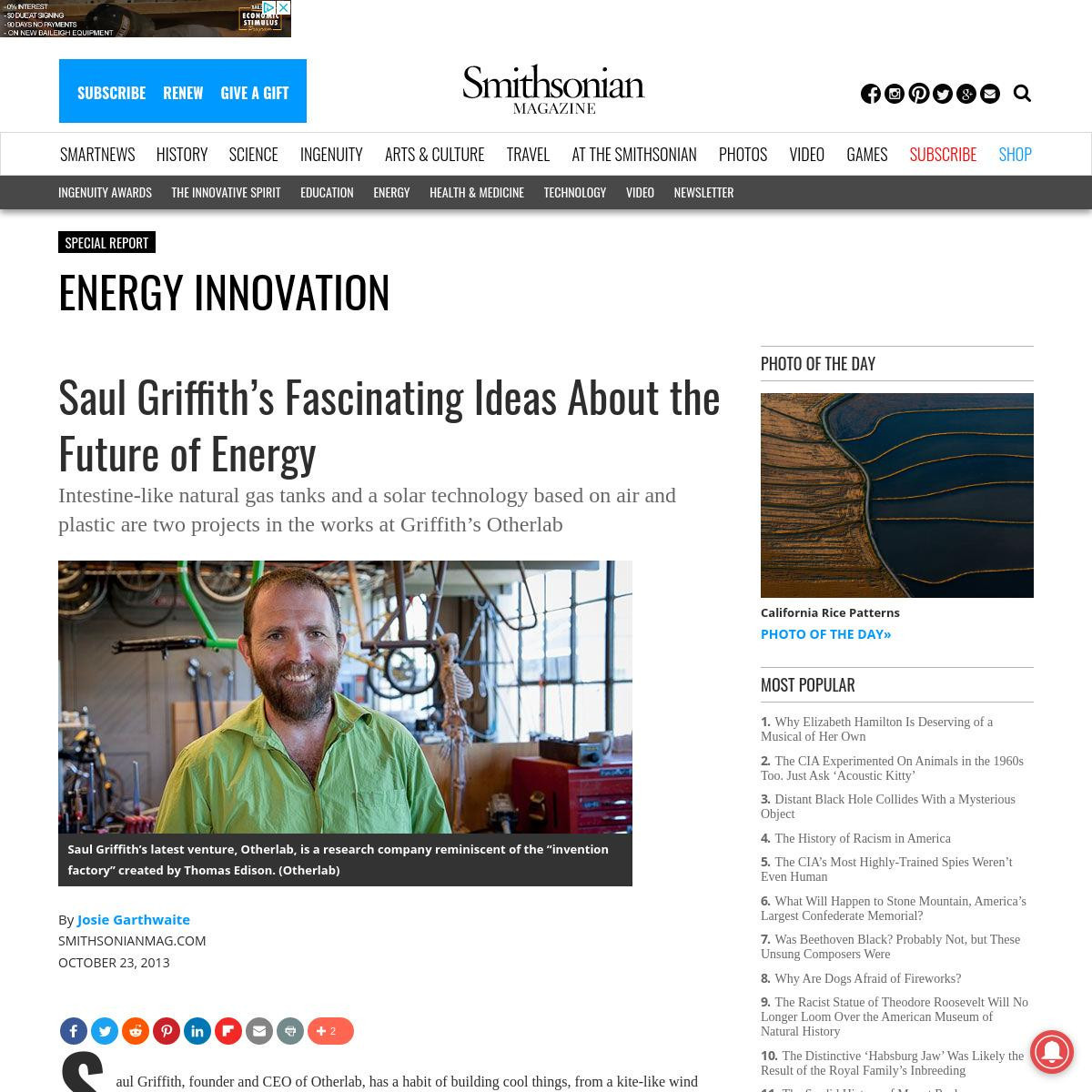