Change Author / Owner : These Stunning Fractals Are Made of Snow

No matter how many times it happens, a newly fallen blanket of snow looks magical. But in all that white, Simon Beck sees a canvas. With careful planning, patience and many snowshoe-clad steps, he creates stunning mathematical patterns.

Beck is a snow artist who creates his art in the French Alps, writes Michele Banks for The Finch and Pea. A skier, Beck first paced out a snowflake pattern in the snow for fun more than a decade ago. When he saw it from above, perched in the chair of a ski lift, he realized he had a unique form of expression. Since then he has traced out scores of designs in the snow—from howling wolves to snowflakes and Christmas trees—but he usually sticks to mathematical patterns.

"You can get to drawing much sooner. You are just following simple rules. You don’t have to keep referring to a diagram," he tells Alex Bellos of The Guardian. "You can do it from memory. And they just look the best."

Informed by a background in engineering and orienteering, Beck sketches out his patterns on paper and then uses a compass and pace counting to keep track of his progress, Bellos reports. A piece might take a few hours of planning indoors but up to 11 hours to actually create.

The combination of athleticism and meditation in beautiful natural environments has drawn interest from some sponsors—notably, Icebreaker created a line of merino wool clothing that features patterns inspired by Beck's work. In 2014, he published a book featuring photographs of his designs, Snow Art.

In an interview with Erin McCarthy of Mental Floss, he explains that the best patterns are fractals—or patterns that repeat multiple times at increasingly smaller scales. Though seemingly complicated, it is based on a single repeated rule. Fractals can be found throughout nature: Imagine the branching of rivers that split into streams or the delicate repeating patterns of a snowflake. Beck explains to McCarthy that beginners should start with a Sierpinski triangle, a simple fractal set.

Beck created most of his patterns in beautiful mountains settings, where reservoirs and lakes provide a mostly flat area to work. Still, he has his eye on a few other spots that are less remote. He tells Mental Floss:

[N]umber one would be the White House lawn, actually. If President Obama wanted it, I’m sure it could be arranged.

I’d also love to do the great lawn in Central Park. If the Onassis Reservoir gets frozen enough to do it, that’d be fantastic. The Buckingham Palace gardens, back in England, would be a great place to do it. Yosemite Valley—there’s quite flat areas of grasslands there. There’s no end to the possibilities.

After spending hours pacing out the design, Beck always tries to view the pattern from above—climbing a nearby peak or riding a ski lift over. Viewing these works is bittersweet since each one is fleeting. Wind or warm weather can erase the image in less time than it takes to make. Or another snowfall may wipe the canvas clean, once again ready for the next work of art. 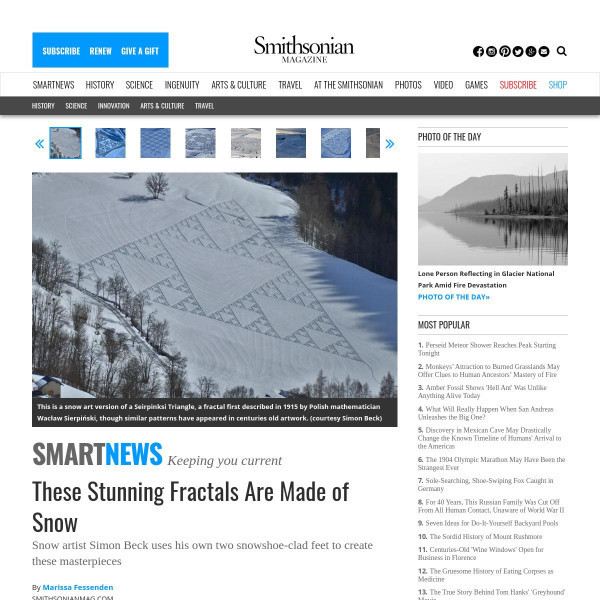