Gravity is only the latest of a long line of books and movies to seize upon the dangers—often deadly—of space travel. But actual astronauts never seem afraid to pierce the atmosphere and plunge into the icy depths beyond our planet. So, are storytellers taking liberties? Is space not quite so dangerous? Are astronauts actual super humans? No—they’re actually quite scared. But they go anyway.

Luca Parmitano is no stranger to the hostility of space. He nearly drowned in his own space suit just a few months ago. On his blog yesterday, he explained that, even though astronauts may seem stoic, they are very aware of how dangerous their jobs are. When asked whether he’s afraid, he says that he often wants to lie:

The temptation to answer simply “no” is great, everyone would breathe a sigh of relief and go on knowing that there are out of the ordinary men and women in the world who work without fear: astronauts. But super humans do not exist – and it is better this way.

My humble opinion is that only fools say they are never afraid – and they are lying when they say it. Fear is a series of sensations, a primordial mechanism that has developed over millennia of evolution to preserve our lives. It would be a waste not to use such a tool. But like any tool, it can be used well or badly: a scalpel, in the expert hands of a surgeon, can save a life while the same scalpel can be lethal when used without skill and knowledge.

The urge to lie about your fear doesn’t just hit Parmitano. In 2011, Maggie Koerth-Baker interviewed astronaut Rex Walheim about going to space. A reader asked, “When you’re going through the selection process, hoping beyond hope to be chosen to train as an astronaut, would you admit to being afraid of anything, or would than seem not very astronaut-like? Is there a place in the training for people to admit to having fear?”

I think it would depend on how you talk about something like that. If you say, “I’m scared to death,” you might not make it. But you can say, “I’m concerned about my safety.” Frankly, if you’re not concerned about sitting on 10 stories of high explosives, you’re not thinking hard enough. The funny thing is, after 5 years of training, it actually doesn’t cross your mind too much.

As Wilheim suggests, many astronauts won’t fess up directly to being afraid like Parmitano does. In 2009, astronaut Wilson Rothman wrote a first person account of his trip to space on Gizmodo. He wrote:

I remember during one of my launch counts, the ladies were taking our pre-launch breakfast orders, going around the table. I was hearing things like, dry toast. A little yogurt. Cereal. You gotta be kidding me, what kind of pantywaists am I flying with? They got to me and I replied firmly and evenly, “Steak and eggs, medium rare and over easy.” Everyone looked at me funny. I stated the obvious. “Hey, we might go out tomorrow and get blown up. I’m going to have steak and eggs!”

Greg Johnson, the pilot of Endeavor, told ABC in 2011 that any astronaut who won’t fess up to being afraid is just lying. “I feel the risk, and I compare launching on the space shuttle a little like going into combat,” he told them. “Any sane astronaut will feel the fear, or concern just prior to liftoff. If they don’t admit they are lying to you.”

In every interview, though, astronauts repeat some variation of the same sentiment: yes, it’s scary, but it is also worth it. 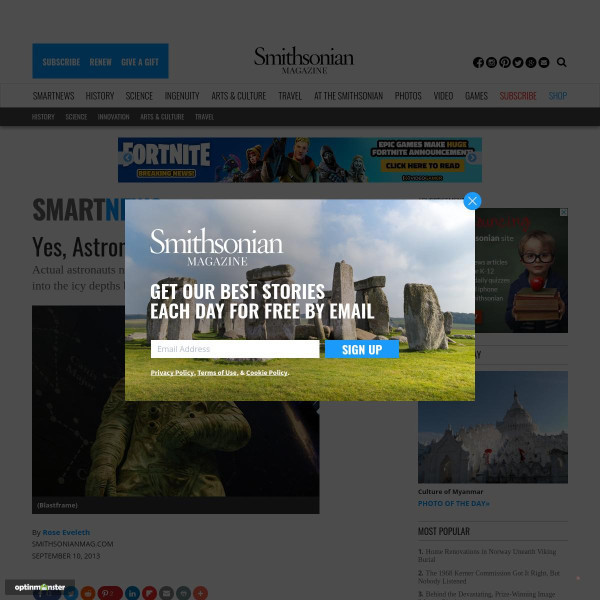