A new study into how people use the anonymized and encrypted side of the internet—the so-called Dark Web—is a reminder that though computer privacy tools can be used for good, they can also be used for terrible ills.

As Andy Greenberg writes for Wired, a new study by University of Portsmouth computer scientist Gareth Owen found that of the computer connections to websites that are specifically designed to be untraceable, the bulk are going to sites that host child pornography.

More than four out of five Tor hidden services site visits were to online destinations with pedophilia materials, according to Owen’s study. That’s over five times as many as any of the other categories of content that he and his researchers found in their Dark Web survey, such as gambling, bitcoin-related sites or anonymous whistle-blowing.

As Nick Mathewson points out on the blog of the Tor project (a provideor of anonymized web services and tools), there are a number of reasons why hits to child pornography websites could skew high. One of the reasons, he notes, is that rather than a lot of people looking at these sites, it could be a smaller number of people looking at a large number of sites. “The greater the number of distinct hidden services a person visits, and the less reliable those sites are, the more hidden service directory requests they will trigger,” writes Mathewson.

Tor's Mathewson's clarifications don't come as a way to defend this particular sect of Dark Web users. Rather, he suggests the finding points to flaws in how the Dark Web works:

Any system that provides security on the Internet will inevitably see some use by bad people that we'd rather not help at all. After all, cars are used for getaways, and window shades conceal all kinds of criminality. The only way to make a privacy tool that nobody abuses is to make it so weak that people aren't willing to touch it, or so unusable that nobody can figure it out.

… We've got to work over the next year or more to develop hidden services to the point where their positive impact is felt by the average netizen, whether they're publishing a personal blog for their friends, using a novel communications protocol more secure than email, or reading a news article based on information that a journalist received through an anonymous submission system. Otherwise, they'll remain a target for every kind of speculation, and every misunderstanding about them will lead people to conclude the worst about privacy online.

In the age of WikiLeaks and the NSA, computer privacy services like Tor are at the forefront of of the conversation. But the research, says Greenberg, could shift the tenor of that conversation:

Law enforcement officials and politicians including New York Senator Chuck Schumer have railed against the use of Tor to enable online drug sales on a mass scale, with little mention of child abuse. Owen’s study is a reminder that criminal content is hiding in the shadows of the Internet that make drug sales look harmless by comparison—and whose consumers may be more active than anyone imagined. 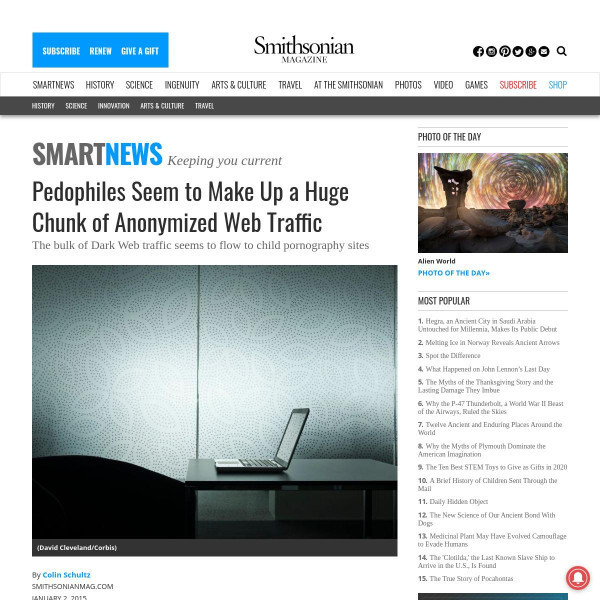