Change Author / Owner : As Glaciers Retreat, They Give up the Bodies and Artifacts They Swallowed

The 5,300-year-old body of Ötzi, the Stone Age human dubbed "The Iceman," is perhaps one of the most famous mummies to emerge from ice. But with glaciers around the world melting, many more bodies — some relatively new, others ancient — are now emerging. Global warming is giving back many once thought lost forever.

Take the soldiers who died during "The White War," a years-long campaign in the Italian front of World War I, later fictionalized by Ernest Hemingway in A Farewell to Arms. This month marks a century since Italy joined the war, and bodies and artifacts from that time are now surfacing. For Vice, Leander Roet writes:

The battle was fought at high altitude, with special weapons and infrastructure like ice-trenches and cable transports. Often the sides would use mortar fire to try and incur avalanches—‘the white death’—on each other’s camps, claiming thousands of lives.

Now, thanks largely to decades of global warming, the Presena glacier running through the battleground is slowly melting away. And with that melting the remains of the White War are slowly emerging. Remarkably well-kept artifacts have been streaming down with the melting water of the glacier since the early 90s: A love letter dated from 1918, to a certain Maria that was never sent. An ode to an old friend, scribbled down in a diary. A love note picturing a sleeping woman, signed, in Czech, “Your Abandoned Wife.”

The meltwater exposes bodies mummified by the cold as well, still wearing their uniforms. In September 2013, the local community of Peio found two young Austrian men.

“The first thing I thought of were their mothers,” Franco Nicolis from the local Archeological Heritage Office told Laura Spinney at the Telegraph. “They feel contemporary. They come out of the ice just as they went in. In all likelihood the soldiers’ mothers never discovered their sons’ fate.”

On the other side of the world, glaciers in the Argentinian Andes have relinquished their grip on a different set of bodies: Incan children sacrificed five hundred years ago, and a young pilot who crashed just a few decades ago.

"It took me a very long time to acknowledge he might be dead," the pilot's mother said, reported Stephen Messenger for Treehugger in 2011. "Now we have a body. I can visit my son at his burial site and grieve like any mother has a right to do."

A different plane carrying 52 passengers crashed into an Alaskan glacier in 1952. An Alaska National Guard helicopter crew found the wreckage in 2012.

But many finds are too ancient to offer comfort to relatives. Instead, those ancient finds are becoming valuable resources for researchers.

“The ice is a time machine,” Lars Pilö, an archaeologist told Andrew Curry in a 2013 article for Archaeology. “When you’re really lucky, the artifacts are exposed for the first time since they were lost.” Global warming has created a kind of boom for this kind of archeology, Curry writes. Melting glaciers have released centuries-old moss, Roman coins, an iron age horse and even ancient forests.

On one hand, it exposes artifacts and sites that have been preserved in ice for millennia, offering archaeologists a chance to study them. On the other hand, from the moment the ice at such sites melts, the pressure to find, document, and conserve the exposed artifacts is tremendous. “The next 50 years will be decisive,” says Albert Hafner, an archaeologist at the University of Bern who has excavated melting sites in the Alps. “If you don’t do it now they will be lost.”

However, the retreat of ice and the slow thaw of these bodies does present a worrisome, if slim, danger. Researchers found that a 30,000-year-old virus trapped in permafrost was viable enough to infect amoeba. Some fear that other pathogens able to infect humans may be lurking in the bits of the world still locked by ice and frost. The worse case would be something like smallpox, for which people have no natural immunity. Fortunately, Michael Lane of the CDC, who worked on smallpox eradication programs, feels this possibility isn’t a strong one, reports Geoff Manaugh for Gizmodo.

"No one feels there's a serious chance that global warming will melt the permafrost and unleash an epidemic," he told Manaugh. But melting glaciers certainly will unleash more bodies and artifacts. 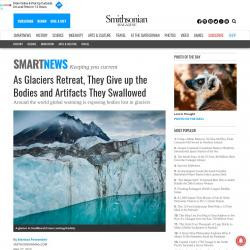