A Brief History of the Chocolate Pot
Description

Browse the aisles of any grocery store today, and you’re likely to find chocolate, and lots of it. Pastries, cakes, Hershey’s kisses and artisanal bars offer an array of choices sure to provide just the right Valentine’s Day fix.

The human love affair with chocolate extends back thousands of years, but the options for consuming chocolate weren’t always so abundant. When the Spanish first introduced the treat to Western Europe in the 17th century, there was really only one: hot chocolate. It was prepared in its very own vessel, the chocolatière, or chocolate pot.

At that time—centuries before the advent of pulverization, emulsification or any of the other industrial processes that would make chocolate widely available in its current forms—  drinking hot chocolate was the easiest and tastiest way to indulge in this luxury import.

“I think that chocolate—particularly when mixed with sugar—was very readily appealing to almost any taste,” says Sarah Coffin, curator and head of the product design and decorative arts department at the Cooper Hewitt, Smithsonian Design Museum. “I suspect that tea and coffee people acquired tastes for but perhaps were a little less easy to immediately embrace.”

Preparing hot chocolate entailed a process distinctive from the other beverages popular at the time. Rather than infusing hot water with coffee grounds or tea leaves and then filtering out the sediment, hot chocolate required melting ground cacao beans in hot water, adding sugar, milk and spices and then frothing the mixture with a stirring stick called a molinet.

When Louis XIII married Anne of Austria in 1615, the queen’s enthusiasm for chocolate spread to the French aristocracy. During that early modern period, the French had refined the dining experience to the point of extravagance. In that spirit, they crafted the chocolatière, a vessel uniquely suited to preparing chocolate.

In reality, the origins of the chocolate pot date back to Mesoamerica, where traces of theobromine—the chemical stimulant found in chocolate—have been found on Mayan ceramic vessels dating back to 1400 B.C. But the chocolate pot that set the standard for Europe, however, looked nothing like the earthenware of the Americas. It sat perched on three feet, with a tall, slender body, and an ornate handle at 90 degrees from the spout. Most important was the lid, which had a delicate hinged finial, or cap, that formed a small opening for the molinet.

“It was inserted to keep the chocolate frothed and well-blended,” says Coffin of the utensil. “Because unlike the coffee I think that the chocolate tended to settle more. It was harder to get it to dissolve in the pot. So you’d need to regularly turn this swizzle stick.”

It was this hinged finial that came to define the form. “You can always tell a chocolate pot and the way you can tell is because it has a hole in the top,” says Frank Clark, master of historic foodways at the Colonial Williamsburg Foundation, who makes colonial-style chocolate—and sometimes, hot chocolate—for guests.

In the 17th and 18th centuries, chocolate pots were mostly made of silver or porcelain, the two most valuable materials of the time. “Chocolate was considered exotic and expensive,” says Coffin. “It was a rare commodity and so it was associated with luxury objects such as silver, and of course in the early days, porcelain.”

As chocolate spread throughout western Europe, each country interpreted the vessel according to their own tastes. Vienna became known for its elegant chocolate and coffee sets. Many German chocolate pots, including several in the Cooper Hewitt’s collection from the mid-to-late 18th century, featured gilded, Chinese-inspired designs known as Chinoiserie.

“They suddenly had this new beverage and took it back to their courts. So then things were made in the different courts, so you get things made in Austrian porcelain or German porcelain and French ceramics and silver and so forth,” says Coffin.

Americans, too, had a thirst for chocolate, which they began drinking in the 1660s, soon after England acquired its own chocolate pipeline, Jamaica, in 1655. Chocolate pots weren’t often produced in the United States, but Coffin says the European imports were of extremely high quality because the wealthy people who purchased them wanted to keep up with the latest continental fashions.

In Europe and the United States, drinking hot chocolate became both a public and private practice. Around the end of the 17th century, chocolate and coffee houses cropped up that served as a meeting spot for lawyers, businessmen, and politicos well into the 18th century. In New England, Clark says those in charge of setting the price of tobacco and other important commodities were known to gather at a chocolate/coffee house to do so.

In private, chocolate was associated with the bedroom, as it was popular to drink first thing in the morning as well as in the evening before bed. A painting by French artist Jean-Baptiste Le Prince from 1769 depicts a woman lying in bed, reaching out for her departed lover, the morning light illuminating her figure. A chocolate pot and cups sit by her bedside. According to the book Chocolate: History, Culture, and Heritage by Louis E. Gravetti and Howard-Yana Shapiro, such images led to chocolate being associated with a leisurely lifestyle. This imbued the beverage with an added air of luxury.

As soon as the Industrial Revolution arrived, that started to change. Chocolate makers developed a method of using hydraulic and steam chocolate mills to process chocolate faster and at a lower cost. In 1828, Coenraad Johannes Van Houton invented the cocoa press, which removed the fat from cacao beans to make cocoa powder, the basis for most chocolate products today. Chocolate prices fell, and soon chocolate became a sweet that most everyone could afford.

The chocolate pot also evolved. Chocolate powder decreased the importance of the molinet, and chocolate pots began cropping up with finials that were stuck in place.

One example in the collections of the Freer and Sackler Galleries is a Satsuma style porcelain chocolate pot, fired with clear glaze and decorated with a colorful array of three-dimensional, enamel dots depicting a Buddhist scholar with his attendants. Ceramics curator Louise Cort says the scene is one of a few stock images commonly used at that time to cater to Western perceptions of Japanese culture.

Mineralogist A.E. Seaman purchased the piece at the 1904 World’s Fair in St. Louis. According to notes from his daughter, the family used the pot for tea rather than hot chocolate. This is not surprising; tea was growing more popular by then, and aside from the shape of the vessel, there is no removable finial that would indicate the pot should be used exclusively for hot chocolate. It could easily have been used to prepare other beverages.

By the 1950s, chocolate pot production died down. Very few, if any, are still made today, but one can still find virtually any style of chocolate pot online or in auction houses. Vessels ranging from pristine 17th-century French silver pots to Japanese Satsuma style ware sell regularly on eBay for anywhere from $20 to $20,000 dollars.

People like Clark at Colonial Williamsburg are managing to preserve the old chocolate tradition. In his demonstrations, he roasts the actual cacao beans, separates out the hard shell, and grinds the beans into a liquid paste. When he does prepare the actual beverage, he dissolves the chocolate in a traditional chocolate pot and adds sugar and spices.

“It really represents the way chocolate was made in colonial times for the very wealthy,” Clark says.

Those interested in imbibing true hot chocolate this Valentine’s Day can easily do so. It’s not hard to find an antique chocolate set and molinet for under $100, and many stores now sell cacao nibs, bits of roasted cacao beans that have been removed from their shells. Grind the nibs in a bowl or on a chocolate stone, and melt the paste in hot water, and you’ll be sipping hot chocolate in no time. (A few documented recipes are also available online from the hot chocolate heyday.)

As far as chocolate’s aphrodisiac powers go, research suggests that there’s very little validity to the lore. But all is not lost; Cort says hot chocolate would have been a worthy tool of seduction purely for the taste itself. “I suspect that… if you thought it had this [aphrodisiac] power and it was in any case sweet if you mixed a lot of sugar and vanilla with it, this would be a wonderful way to try and seduce somebody.” 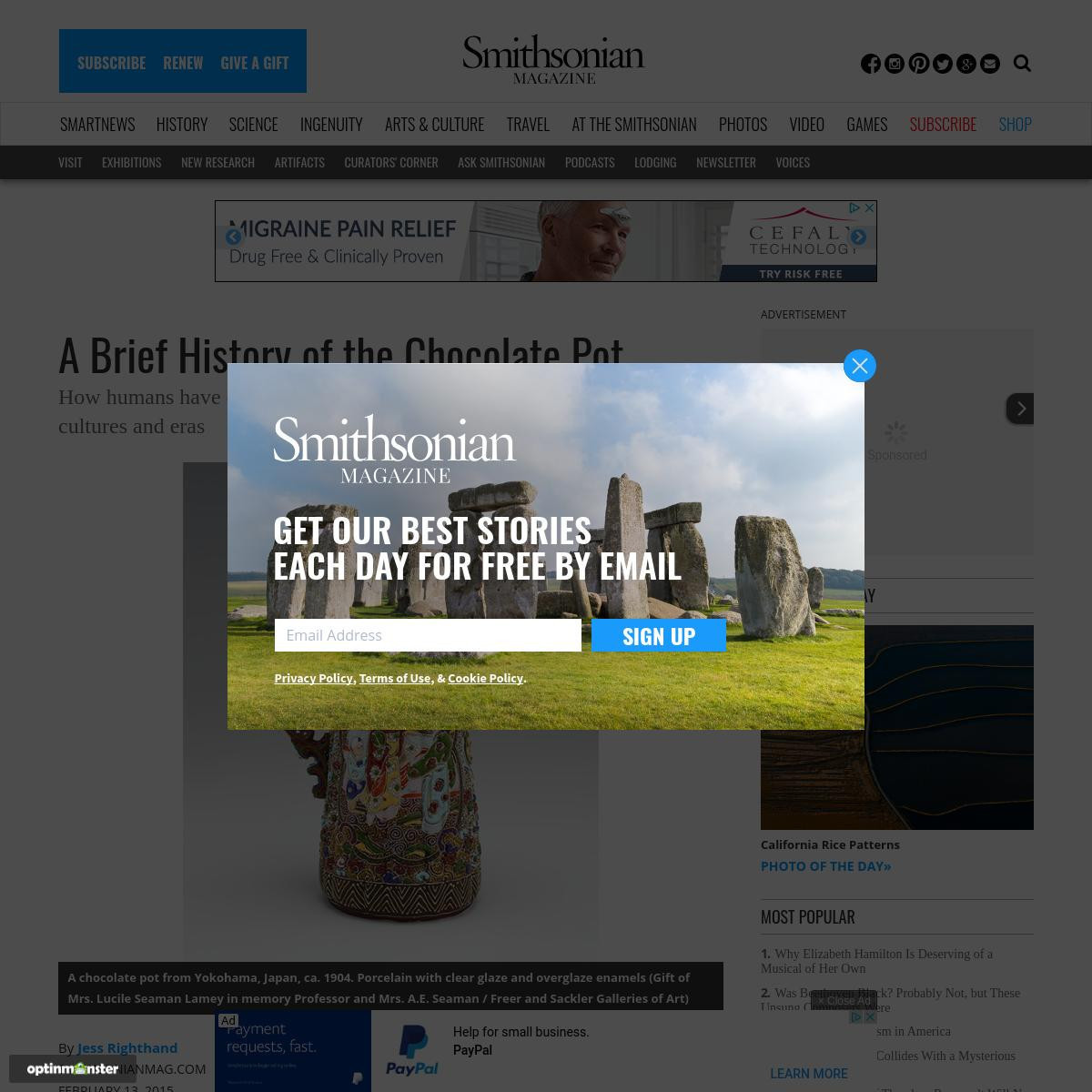