Back to Brontosaurus? The Dinosaur Might Deserve Its Own Genus After All

It may be one of the most famous dinosaurs of all time. The trouble is that shortly after being discovered, the Jurassic creature fell into an identity crisis. The name for the long-necked, heavy-bodied herbivore Brontosaurus excelsus—the great “thunder lizard”—was tossed into the scientific wastebasket when it was discovered that the dinosaur wasn't different enough from other specimens to deserve its own distinct genus.

But now, in a paleontological twist, Brontosaurus just might be back. A new analysis of dinosaur skeletons across multiple related species suggests that the original thunder lizard is actually unique enough to resurrect the beloved moniker, according to researchers in the U.K. and Portugal.

“We didn’t expect this at all at the beginning,” says study co-author Emmanuel Tschopp of the Universidade Nova de Lisboa. At first, Tschopp had been working only with Octávio Mateus of the Museu da Lourinhã to update the family tree of diplodocid dinosaurs.

But when it started looking like Brontosaurus might be real after all, they asked Roger Benson at the University of Oxford to join their team and run a statistical analysis on their findings. “Roger’s calculations gave the same results,” Tschopp says. “Brontosaurus should be valid.”

The name Brontosaurus excelsus was coined by Yale paleontologist Othniel Charles Marsh, who described the species in an 1879 paper with the mundane title “Notice of New Jurassic Reptiles.” His description is based on an enormous partial skeleton exhumed from the 150-million-year-old rock of Como Bluff, Wyoming. This “monster” of a dinosaur added to Marsh’s rapidly growing fossil collection, which already included similar species. Just two years earlier, Marsh had named Apatosaurus ajax—the “deceptive lizard”—from a partial skeleton found in the Jurassic rock of Colorado.

Brontosaurus quickly gained fame because it was among the first dinosaurs the public encountered. An illustration of its skeleton “was the first dinosaur restoration to get a wide circulation,” points out North Carolina Museum of Natural Sciences historian Paul Brinkman. This “helped spread the popularity of Brontosaurus in an era before dinosaurs proliferated widely in natural history museums.” And once museums started to put up skeletons of Brontosaurus—the first was assembled in New York City in 1905—the dinosaur’s popularity only grew.

An old-school drawing of Brontosaurus excelsus graces a 1900s trading card from a French chocolate manufacturer. (Public domain, via AlphaGalileo)

But as anyone who has strolled through an up-to-date museum hall knows, the name Brontosaurus was eventually abandoned. In 1903, paleontologist Elmer Riggs found that most of the traits that seemed to distinguish Marsh's two specimens had to do with differences in growth, and it was more likely that the skeletons belonged to the same genus. Since it was named first, Apatosaurus had priority over Brontosaurus. Despite the extreme similarity between Marsh’s skeletons, Riggs recognized that they differed just enough to be regarded as different species. Therefore Apatosaurus ajax would remain in place, and Brontosaurus was changed to Apatosaurus excelsus. It took a while for museums to follow suit, but by the 1970s everyone finally got on board with the shift.

Bringing Brontosaurus back from scientific obsolescence would be the equivalent of restoring Pluto to the status of planet. And much like the drawn-out debate over the extraterrestrial body, the status of Brontosaurus relies on definitions and the philosophy of how scientists go about making divisions in a messy natural world.

To navigate the ever-growing number of dinosaur species, paleontologists look to a discipline called cladistics. In short, scientists pore over dinosaur skeletons to score a set of subtle characteristics, such as the way a flange of bone is oriented. Computer programs sort through those traits to create a family tree based upon who shares which characteristics. However, different researchers might pick different characteristics and score them in different ways, so any single result is a hypothesis that requires verification from other researchers independently generating the same results.

Here’s where Brontosaurus stomps in. Tschopp and colleagues had set out to create a revised family tree of diplodocid dinosaurs—huge sauropods found from the western United States to Portugal—with a special emphasis on sorting out how many species of Diplodocus and Apatosaurus there were. The researchers scored 477 anatomical landmarks across 81 individual dinosaurs. While the general shape of the tree supported what other paleontologists had previously proposed, there was a surprise in store: The bones Marsh originally called Brontosaurus seem to stand apart from the two Apatosaurus species, the team reports today in PeerJ.

An infographic traces the history of Brontosaurus and Apatosaurus. (StudioAM, CC BY 4.0)

Most of the differences the researchers identified were subtle anatomical features, but there are some broader traits, Tschopp says. “The most obvious and visual feature would be that Apatosaurus has a wider neck than Brontosaurus,” he says, adding that despite the title “thunder lizard,” Brontosaurus was not quite as robust as Apatosaurus.

These results came from two Brontosaurus skeletons: the one Marsh used to coin the name, and a second that could confidently be referred to as the same species. There are more possible Brontosaurus bones out there, and Tschopp studied many of them in preparation for the current study. But because the skeletons were incomplete, the bones popped up in various positions on the family tree. Now, with the new diplodocid tree in hand, Tschopp says he plans to take a second look at these bones to see whether they truly group with Brontosaurus or something else.

What remains unclear is whether Brontosaurus is here to stay. Southern Methodist University paleontologist Louis Jacobs praises the new study. “Numerous new sauropods have been discovered and named in the last couple of decades, new techniques have been developed, and we simply have a more sophisticated understanding of sauropods now,” he says. The potential resurrection comes out of this burgeoning understanding. In short, Jacobs says, “good for them, and bully for Brontosaurus!”

John Whitlock of Mount Aloysius College is more reserved. “For me the issue is how you want to define genera and species in dinosaur paleontology,” Whitlock says. Some researchers will look at this study and conclude that Brontosaurus should still be an Apatosaurus because of their close relationship, forming what paleontologists call a monophyletic group, while others will emphasize the diversity. There’s no standard rule for how such decisions should be made. “I think we are going to start seeing discussion about not only how much change is enough to split a monophyletic group but, more importantly, how do we compare characters and character states?” Whitlock says. “That's going to be a fun debate to be a part of, and I'm excited about it.”

The fate of Brontosaurus now relies upon whether other paleontologists will be able to replicate the results, as well as what those researchers think about the threshold for when dinosaurs merit different names.

Other dinosaurs are held in the same taxonomic tension. While some researchers recognize the slender tyrannosaur Gorgosaurus libratus as a unique genus, for example, others see it as a species of Albertosaurus. But the battle for Brontosaurus stands apart. The name has become a totem of the extinct creatures that continue to ignite our imaginations with scenes of Jurassic titans ambling over fern-carpeted floodplains. We’ve kept the name Brontosaurus alive because the hefty herbivore is an emissary to a past we can never visit, but that we can still connect to through the dinosaur’s magnificent bones. Protocol will ultimately dictate the dinosaur’s title, but in spirit if not in science, those old bones will always be Brontosaurus. 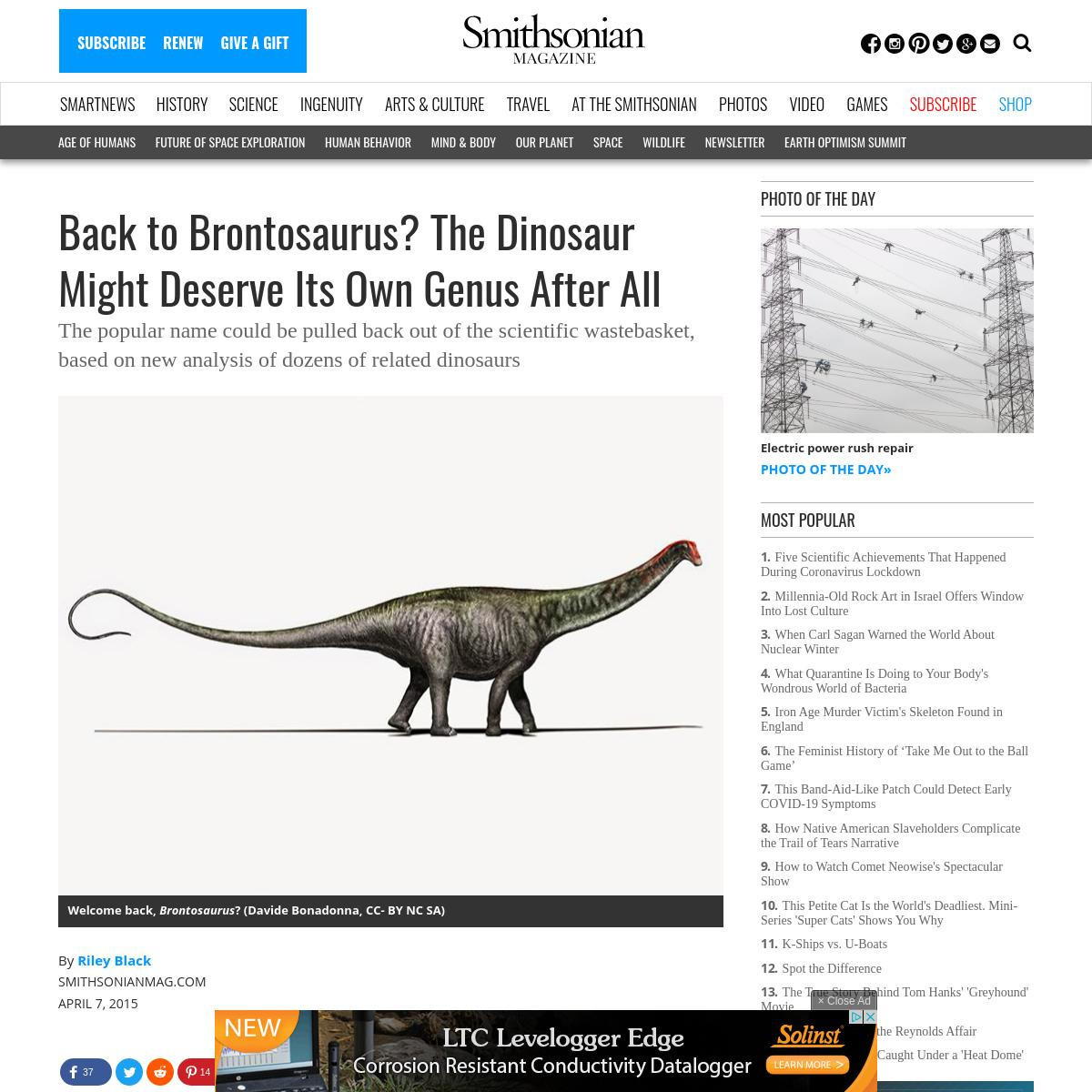