The new Yasir Arafat Museum in Ramallah in the West Bank, opened last month on the 12th anniversary of the Palestinian Liberation Organization leader’s death. Daniel Estrin at NPR reports that the three-story museum is located next to Arafat’s former compound and includes the nearby rooms where he spent the final years of his life as well as his mausoleum.

Isabel Kershner at The New York Times reports that the $7 million project was funded by the Palestinian Authority and chronicles much of Arafat’s life, but it will not likely settle any of the controversy about his legacy. Arafat was the founding leader of the Al-Fatah political party, the chairman of the Palestine Liberation Organization and president of the Palestinian Authority, so most Palestinians regard him as as a revolutionary hero who fought for an independent homeland; most Israelis and their allies viewed him with, at best severe skepticism or, at worst, as "a master terrorist," as Israeli Prime Minister Benjamin Netanyahu put it in an interview with CNN in 2002.

The museum charts Arafat's life, beginning with an explanation of Palestinian nationalism in the early 20th century, then, the Nakba, "'the catastrophe', as Palestinians call the period leading up to and following the creation of the state of Israel in 1948," as Peter Beaumont at The Guardian, reports.

"​The museum treads a fine line, honoring the Palestinian narrative while dealing dispassionately with some of the more awkward periods in the Palestine Liberation Organization’s chronology," writes Estrin. For example, the museum calls attention to the more violent acts carried out by Palestinian factions during Arafat's time in power, but does not discuss the extent of Arafat's involvement, Kershner writes.

But as American diplomat Dennis Ross explains in his book, The Missing Peace: The Inside Story of the Fight for Middle East Peace:

Arafat's greatest travesty as a leader is that he did nothing to delegitimize those who used violence against the Israelis. Never throughout the Oslo process did he declare that those carrying out terror and violence against Israelis were wrong, were illegitimate, were enemies of the Palestinian cause. He might arrest them from time to time; he might tell us he had "zero tolerance for terror." But the message for Palestinians was that he was under pressure from us or the Israelis and he had to do this—not that Palestinian aspirations were being threatened by violence and that Palestinian interests demanded it not be tolerated.

Displays in the museum include Arafat’s thick black glasses, signature olive green shirt, his pistol and the checkered keffiyeh headdress that he wore in almost every image taken of him. Visitors can also peer into the bedroom where he spent the last 34 months of his life, which has been left untouched. In 2000, after a Palestinian uprising known as the Second Intifada, Israeli tanks kept Arafat under house arrest in his compound, even demolishing some of the structure. In 2004, in ill health, Arafat was taken to France where he died of unknown causes, reports Estrin.

“His legacy is in many ways too big for a single museum to hold. He was a symbol of unity for the Palestinian people, a national leader, a freedom fighter and a father,” museum director Mohammad Halayqa tells Beaumont. “His life overlapped with the Palestinian experience, so we have tried to tell both stories together without intruding Arafat in events where he does not belong.”

Some claims made in the museum do not hold water, such as an exhibit that states Arafat was poisoned with radiation by Israeli agents while in France, though several studies have concluded that there is no evidence of that.

The opening of the museum underscores the way the Palestinian movement has fractured in a decade without Arafat; Gaza is led by Hamas, and the West Bank by Fatah, a schism that rose in the wake of Arafat's death.  To condense an incredibly complex situation into a few words, Fatah seeks a peaceful agreement with Israel to create a two-state solution, while Hamas refuses to Israel recognize Israel and seeks to destroy it, splintering Palestinian culture.

“We all miss him,” museum visitor Ahmad Aboushi tells Estrin. “The person who can unify us. We miss the leadership in his character and charisma, I think.”

In 2007, Hamas seized control of Arafat’s former headquarters in Gaza, looting the building and most of the artifacts from his life, including the Nobel Prize medal he won in 1994 for negotiating a peace deal with Israel. (The object was returned to the museum in October.) So far, none of the other artifacts have surfaced. 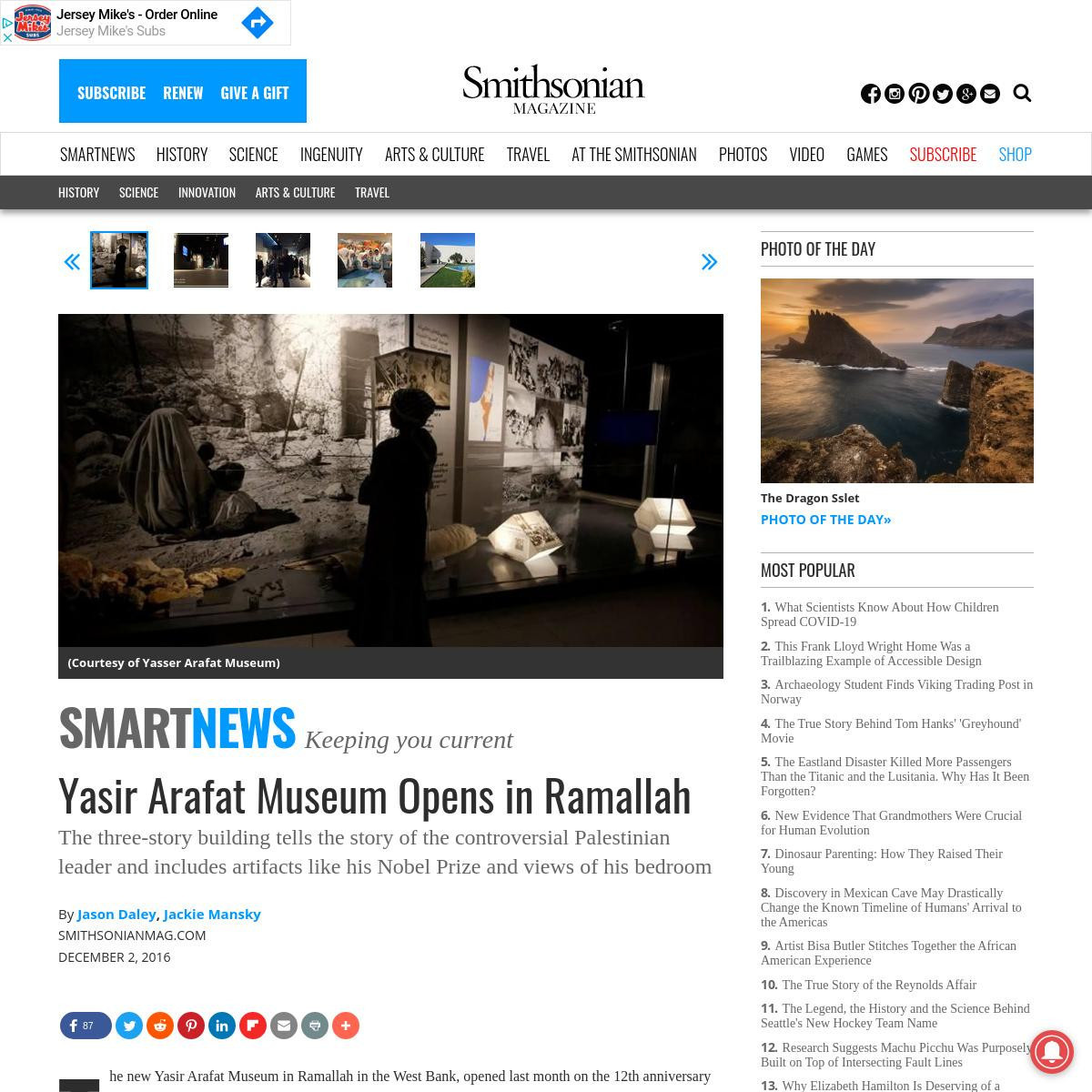 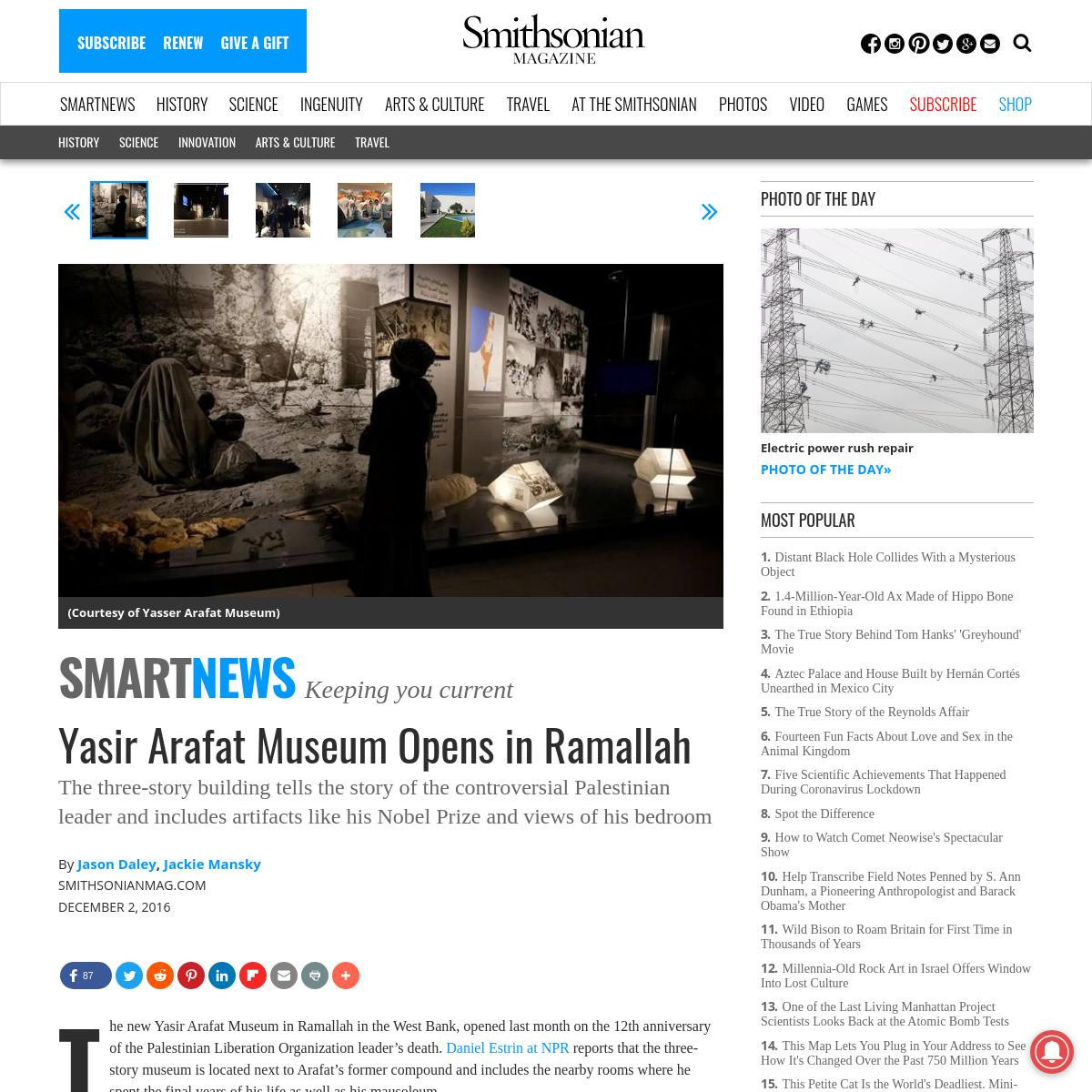