Change Author / Owner : The Tinman's Hat From "The Wiz" Offers Just a Hint of the Musical's Beating Heart

There he was, on stage: a skillet for a hat, steel wool for hair, an aluminum garbage can for a torso and an oversized beer can for a shin guard. When Dorothy and the Scarecrow, fellow travelers on the Yellow Brick Road, found him, his rust-encrusted joints had rendered him immobile. As Dorothy dispensed the restorative oil, he slipped into song and a little soft shoe—“Slide some oil to me, Let it trickle down my spine, If you don’t have S.T.P., Crisco will do just fine.”

He needed some oil, yes, and he would need a heart, but this particular tin woodman and his stage friends from The Wiz, an all-black musical adaptation of L. Frank Baum’s 1900 story The Wizard of Oz, had plenty of soul.

Forty years ago, however, mainstream, elite Broadway seemed poised to reject all that groove.

When the show opened at the Majestic Theater on January 5, 1975, it marked a Broadway first. There had been all-black and interracial productions of white musicals—Hello Dolly and The Pajama Game, respectively—and there had been major black musicals before—Purlie and Raisin. But none had, as Jack Viertel, artistic director of the City Center Encores! observed in Playbill, “dared to be entirely post Jim Crow.” In none had all the creators been black. From the producer—Ken Harper—to the costume designer and eventual director—Geoffrey Holder, and from lyricist and composer to choreographer, The Wiz represented a landmark moment. And the inspiration for that landmark moment—that effervescent celebration of black culture, humor and music—was none other than Baum’s beloved children’s book, whose 1939 film adaptation with Judy Garland had been virtually sanctified by the American public’s adoration. Instead of “Follow the Yellow Brick Road” and “We’re off to See the Wizard,” The Wiz offered up a rhythm and blues alternative: “Ease on Down the Road.”

Today, as the musical marks the 40th anniversary of its Broadway debut, its status as a part of the nation’s narrative finds affirmation from historians, curators and conservationists at the National Museum of African American History and Culture. One of the museum’s largest collections, The Black Fashion Museum Collection, acquired in 2007, includes not only the Tinman’s headpiece, but also more than 700 garments, 300 accessories and 60 boxes of archival material, much of which curators are still processing. Among those garments are several other original costumes designed by Holder for The Wiz, including those for Dorothy, the Wiz, Addaperle (the good witch of the north) and Evillene (the wicked witch of the west). “Taking the Stage,” one of the inaugural exhibitions planned for the museum’s opening in 2016, will exhibit, among others, the Tinman’s entire costume.

The Wiz challenged white audiences to broaden their vision of Baum’s classic American fairy tale. “With The Wiz, African Americans were staking a claim to a fairy tale that was central to American culture. They were saying, ‘We have been left out of that story—but it is our story, too,’” says historian Megan Williams, visiting professor at Skidmore College, in Saratoga Springs, New York, where she teaches a course called “The Wizard of Oz as American Myth.”

“The Wizard of Oz is about Dorothy liberating people who are enslaved by others—the witches—or who feel, personally and psychologically, oppressed and unable to move,” Williams says. “Slavery, emancipation, mobility and resistance to oppression in the forms of religion, music and dance—black audiences saw all this in The Wiz and appreciated it.”

Mainstream critics, however, did not: “There are many things to enjoy in The Wiz,” New York Times critic Clive Barnes wrote, “but, with apologies, this critic noticed them without actually enjoying them.” Days later, critic Walter Kerr, also writing for the Times, denounced The Wiz for its dearth of laughs and focus, declaring the adaptation “feeble at every turn.”

Yet, six months later, the all-black production had garnered seven Tony awards—including ones for best musical, best costume design and best director. When the Broadway run of The Wiz finally closed, four years had passed and with them 1,672 performances. The show, by 1978, had become a popular film starring Michael Jackson as the Scarecrow and Diana Ross as Dorothy.

“Luckily, most blacks don’t pay any attention to the critics,” producer Harper, who died in 1988, told an interviewer in 1976. “Black people like my mother and Stephanie Mills’ [Dorothy] mother, both come from churches with large congregations. They really got the word out.” Within a matter of weeks, word of mouth, editorials in black newspapers and TV commercials—a Broadway anomaly, having previously been utilized only for the musical Pippin—delivered busloads of black theatergoers from nearby cities and suburbs and kept The Wiz alive.

Creatively embedded with satire and social commentary, The Wiz was rich with details that would have resonated with black audiences, says Dwandalyn Reece, curator of music and performing arts at the Smithsonian’s African American History Museum. Consider the Tinman’s costume. With his oilcan, fashioned by Holder from a Dominican percussion instrument, a güira, blacks detected a nod to the African diaspora. From the skillet atop the Tinman’s head wafted allusions to life in the kitchen and the role of slaves as domestics. And from the Tinman’s trash-like armor—beer cans and garbage cans—came echoes of the urban experience.

“The Wiz remained true to the way the American musical had been conceived—as a fantasy world—The Wiz was pure entertainment—but it was coded with images and sensibilities that were tied to the African American community,” says Reece. “The show opened up the landscape, asked about how certain topics could be treated and how black musical theater could operate in the larger milieu of mainstream musicals.”

“We’ve got work to do,” says the museum’s head of collections Renee Anderson about the Tinman’s headpiece, worn by actor Tiger Haynes in the original production. “Broadway theater costumes take a beating.”

The molded leather of the skillet? “Cracked.” The stitching? “Coming undone.” The polyurethane ear padding? “Degraded.” And the rivets on the canvas belting? “Rusted from Tiger Haynes’ perspiration as he sang and danced across the stage,” says Anderson. (Again, the rust.)

She adds, “We will stabilize and reinforce the headpiece, but we want to show that patina.”

For Reece, that patina has a personal connection. When she was ten years old and living in Denver, she and her family travelled to New Jersey to visit relatives. Her mother took Reece into Manhattan to see The Wiz. “I am not sure I grasped the significance of every line and image,” she says, “but I remember the splendor of it all. Seeing the story cast in a new light was exciting. I loved the movie The Wizard of Oz, and I loved Judy Garland as Dorothy, but seeing characters I could relate to—Stephanie Mills as Dorothy and characters who looked like my father or like my uncle—I remember feeling at home.”

The Tinman's hat from the Broadway musical The Wiz will go on view in 2016 in the exhibition, “Taking the Stage,” one of the inaugural shows planned for the opening of the National Museum of African American History and Culture. 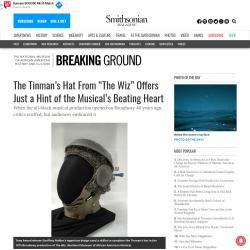