Change Author / Owner : A German Composer Uncovered a Collaboration Between Mozart and Salieri

Does the name Antonio Salieri ring a bell? If you watched the 1984 Best Picture winner Amadeus, it probably conjures up images of Mozart’s tortured, scheming rival, a man so disconcerted by the prodigy’s success that he went insane, possibly even killing one of history’s greatest composers. But a recent rediscovery could put a nail in the coffin of their supposed rivalry: A long-lost collaborative composition penned by both men has been unearthed at a Czech museum.

The news was reported by Reuters, which says that the arrangement was found in the Czech Museum of Music’s reserve collection. A German composer and musicologist searching for compositions of Salieri’s students uncovered the joint work, “Per la Ricuperata Salute di Ofelia” (“For the recovered health of Ophelia”), which celebrates an English singer. A recent digitization effort revealed the short piece, which Reuters reports was performed on a harpsichord Tuesday.

Rumors of a rivalry between the composers has swirled since they first brushed elbows in the 1770s. Salieri, an Italian, was the court composer of Emperor Joseph II and was already known for his operatic achievements when Wolfgang Amadeus Mozart, who was five years his junior, burst onto the music scene. Historians speculate that any enmity between the men may have come more from Mozart than Salieri—the Austrian complained about the Italian influence in the court and may have seen Salieri as an obstacle to his success.

Gossip that Salieri hated Mozart or even tried to poison him seems to have originated after Mozart’s death in 1791. Though Salieri mourned Mozart at his funeral and even later taught Mozart’s son, he was soon linked with ugly accusations that he had caused the composer's demise.

In 1824, attendees of a performance of Beethoven’s Ninth Symphony were handed anonymous leaflets that described Salieri forcing Mozart to drink from a poisoned cup, and the rumor was so deliciously suggestive that it inspired a dramatic dialogue from Pushkin, which was later turned into an opera. Amadeus, which was adapted from a stage play by Peter Shaffer, carried the rumor into the present day. All this despite the fact that historians can’t really find any evidence for any ongoing personal hatred between the men.

So the supposedly epic rivalry may not have been that epic. But was the song they composed together any good? Apparently not: A Mozart expert tells Reuters that the piece is “...short, not great.” The men may not have snubbed or plotted against one another in real life, but perhaps it’s best that they didn’t make more music together. 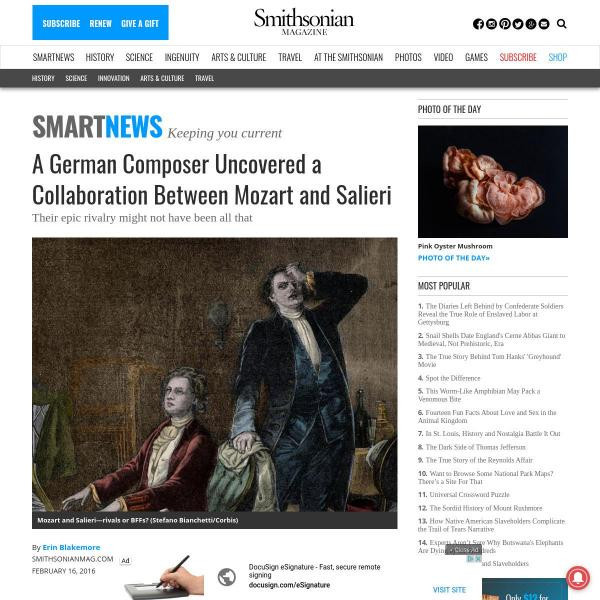