The movement of animals from the land into the sea has happened several times over the last 250 million years, and it has been documented in many different and singular ways. But now, for the first time, a team of researchers has created an overview that not only provides insight into evolution, but may also help more accurately assess humans’ impact on the planet.

The oceans are teeming with tetrapods—“four-legged” birds, reptiles, mammals and amphibians—that have repeatedly transitioned from the land to the sea, adapting their legs into fins. The transitions have often been correlated with mass extinctions, but the true reasons are only partly known based on fossils and through study of Earth's climate, for instance.

Those transitions are considered to be “canonical illustrations” of the evolutionary process and thus ideal for study; living marine tetrapods—such as whales, seals, otters and sea lions—also have a big ecological impact, according to Neil P. Kelley and Nicholas D. Pyenson, the two Smithsonian scientists who compiled the new look at these tetrapods, appearing this week in the journal Science.

Instead of gathering evidence from a single field, the pair pulled together research from many disciplines, including paleontology, molecular biology and conservation ecology, to give a far larger picture of what was happening when animals transitioned from the land to the sea across millennia.

Almost by necessity, scientists tend to work in narrow silos, so this research will help broaden their views and potentially make for quicker progress in understanding evolution. Knowing how these creatures adapted over the last few hundred million years, and especially how they've changed in the era since humans appeared, could help us become better stewards of the planet.

“It’s a one-of-a-kind summation of all that’s known about those different groups that evolved to go back to the sea,” says Louis L. Jacobs, a professor of earth sciences and president of the Institute for the Study of Earth and Man at Southern Methodist University. The paper lays it all out in a way that allows scientists to make comparisons across species, he adds.

“The review really gets at the heart of evolution and why the study of evolution is important,” says Sterling Nesbitt, an assistant professor of geosciences at Virginia Polytechnic Institute and State University. Nesbitt focuses on vertebrate evolution—not marine animals—but he says that the Smithsonian researchers’ work will help him and his students understand, for instance, how some land animals may have adapted to being able to live in trees.

The research also “provides the evolutionary context for understanding how living species of marine predators will evolve and adapt to life in the Anthropocene,” says Kelley, the paper’s lead author and a researcher in the National Museum of Natural History department of paleobiology. He adds that he purposely chose to use the term “Anthropocene” in the paper. Some scientists use it to describe the current geological era, but also to mean that it’s a time in which humans seem to be playing a dominant role in the direction of the planet.

Over a period of 300 million years, many kind of species ranging from seals to mosasaurs independently developed similar streamlined forelimbs (for swimming) as they transitioned from living on land to the ocean. (Neil Kelley and Nick Pyenson, NMNH)

“It’s not just academic to imagine what the fate of these animals might be,” Kelley says, adding that marine predators in particular are ecologically important players. "It might have a big impact if we lose these predators,” he says.

The Kelley and Pyenson paper draws from 147 mostly peer-reviewed studies in a variety of fields, giving a rich overview of some of the parallel adaptations that occurred among a number of marine tetrapod species. That’s extremely tantalizing, says Jacobs.

Among its many threads, the work highlights a relatively new line of research called fossil pigment reconstruction, a technique that gives scientists the ability to determine, from a fossil, the color of an ancient bird’s feather or of a prehistoric reptile’s skin. Coloration can provide clues to the ways species adapt to their environment. One study, for instance, revealed that ancient marine reptiles had dark coloration, “possibly for temperature regulation or ultraviolent light protection,” the researchers write.

Genomic studies are also helping to piece together the reasons marine animals with different land ancestors appear to have developed similar adaptations when they went into the ocean, according to the authors. For instance, both beaked whales and seals have evolved to have the ability to store myoglobin—an oxygen-binding protein—in their muscles. This gives the deep divers the ability to survive underwater for long periods of time. Prior to genomics, scientists had not been able to trace that similar ability down to a molecular level, says Kelley.

But now, they can see that these different types of sea divers may have the same cellular mechanisms. “There’s a deep evolutionary connection there,” says Pyenson, curator of fossil marine mammals at the Natural History Museum. The question now is whether genetic sequences can be tied to specific behaviors or body type, or breathing ability, or fin development. “We don’t know yet, but we might in the next five years or so,” Kelley adds.

The review also pulls together various studies that show humans’ impact on tetrapod evolution. Humans have hunted a variety of tetrapods almost to extinction, and human activity seems to be indirectly hastening the disappearance of others. Six of seven sea turtle species are threatened. And the Yangtze River dolphin, found only in that river in China, was declared extinct in 2006 as a result of shipping accidents and habitat degradation.

But some tetrapods have outwitted humans. Gray whales, which were thought to live only in the Pacific, have recently been found in the Atlantic. “The best guess for how they got there is they are moving through the Arctic,” says Kelley, noting that the ice has melted enough to allow a waterborne passage. The fossil record shows that gray whales once lived in the Atlantic some 100 million years ago, so their movement back may be a recolonization process, Kelley says.

Kelley and Pyenson hope that their paper motivates more collaborations, for instance, among paleontologists, biologists and conservationists, to bring the past and the present together—especially to take a closer look at marine animals. Humans “are having an outsize impact on the future,” says Pyenson. The review helps answer the question of “what is going to be the fate of these ecologically important species?”

“Understanding the ocean is vital for humans on this planet,” says Jacobs, noting that it plays an important role in the ecosystem. But he adds that humans are changing the ocean—leading to rising sea levels and rising temperatures, as well as changes in salinity and acidity, all of which are stressing animals. “We don’t know all the unforeseen consequences of what these physical changes will bring about.”

An assortment of Cretaceous-era marine tetrapods from near the end of the "Age of Reptiles," including a sea turtle, an early flightless marine bird, a large mosasaur and a long-necked elasmosaur. (Artwork by Karen Carr/NMNH)

Wildlife New Research at Smithsonian Articles Science At the Smithsonian 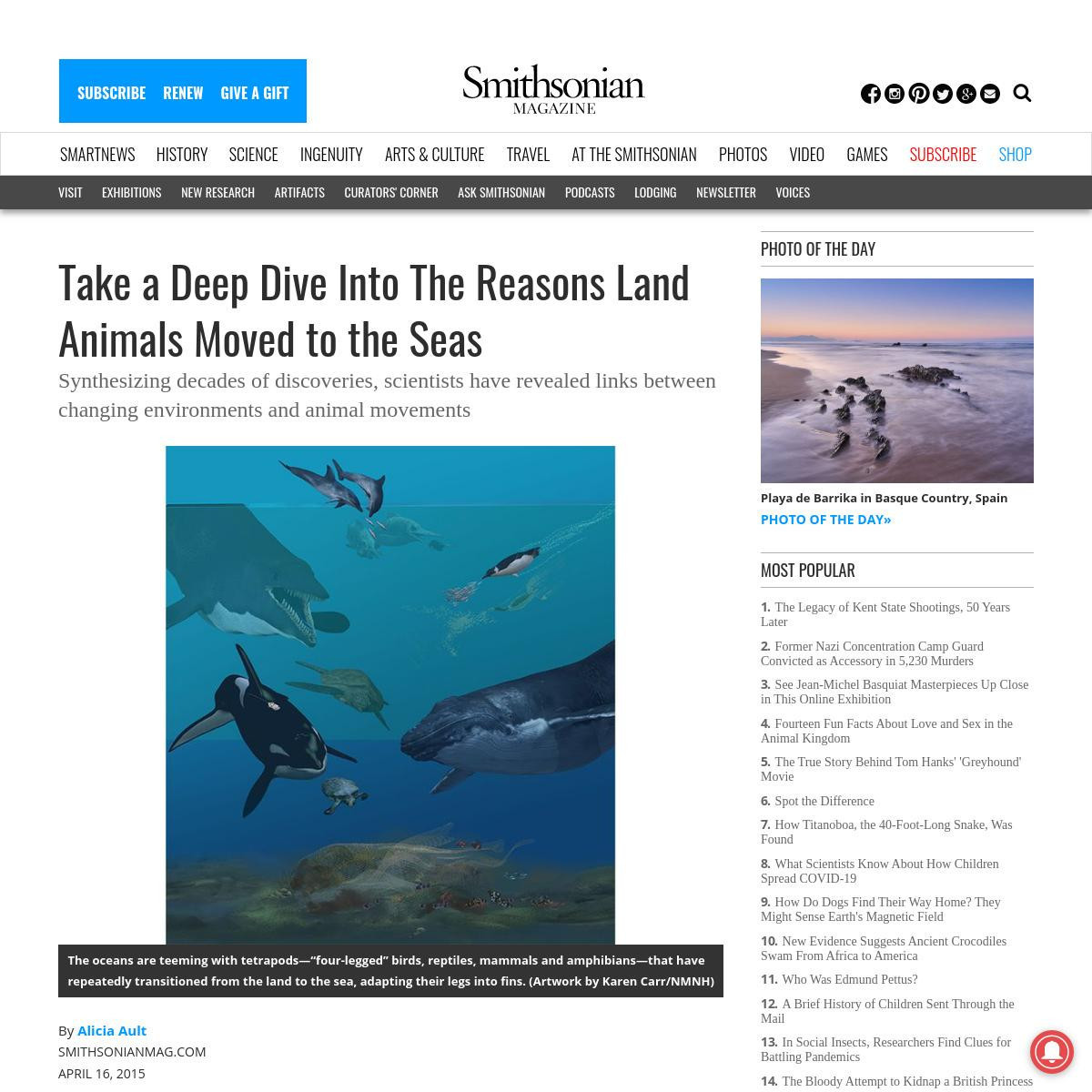