Change Author / Owner : What It's Like to Live in This Smart, Energy-Efficient Home of the Future

At first glance, it looks like an ordinary home with a neat yard. Inside there is a wooden dining table and chairs, a taupe sectional sofa, a 65-inch built-in flat screen TV in one living room wall and a white kitchen with silver appliances. But the house, on the University of California campus in Davis, is a cradle of technology that foretells the future of home design.

The Honda Smart Home, completed last spring, is an experiment in efficiency. With 1,944 square feet of comfortable living space, the structure uses 75 percent less energy and three times less water than a typical home. It runs on solar energy and a battery system for storing solar electricity that is then used at night, and doesn't need a conventional air conditioner and heater, a remarkable feat when temperatures easily climb to the 90s in summer days and dip to the 30s in winter nights. The home’s automated and energy-efficient LED lighting system helps to regulate humans' sleep-and-wake cycle by adjusting the brightness and warmth of the lights to mimic the shift in natural lighting throughout the day.

The house is equipped with an energy management system Honda created to monitor and manage its energy production and consumption. Though it's connected to the electrical grid, the abode produces more energy than it uses throughout the year, making it a "zero net" home. California requires all new homes to be zero net energy starting in 2020. Honda posts the home's architectural and technical designs online, says Michael Koenig, who leads the smart home project.

"This house is smarter than me," says Stu Bennett with a chuckle. He fiddles with an iPad app that allows him to control the lighting, the entertainment system, the charging of an electric car in the garage and the opening and closing of the window shades. He can also check the solar energy production, the charged level of the battery pack and room temperatures on the tablet. "You can even pipe music into your garage. This is the ultimate remote control," he says.

It took Stu Bennett, Susan O'Hara and their twin daughters a couple of months to adjust to the home's technologies. (Ucilia Wang)

Bennett, his wife Susan O'Hara and their twin 9-year-old daughters moved into the home in October. O'Hara is the executive director of UC Davis' School of Education while Bennett is an actuary for California's public employee health and retirement plan system, CalPERS, in Sacramento. Bennett's need to commute 17 miles each way to work was one of the reasons that Honda picked the family to be the first occupants. The carmaker wants to collect data about charging and driving electric cars and provides Bennett with a blue, all-electric Fit.

The couple was renting a much larger home nearby when they applied to live in the smart home, intrigued by the chance to experience its technology. "We knew this was a once-in-a-lifetime opportunity," Bennett says.

While Honda is best known for making cars, it has a broader interest in developing technologies for dealing with climate change. The smart home allows Honda and UC Davis researchers to test gadgets, software and design, of their own or from other companies, and monitor how well they work together. Some of the technologies are already available to consumers, such as solar panels installed by SolarCity and the energy-efficient Bosch dishwasher and Kitchen Aid refrigerator. Other technologies are employed in novel ways. LED lights are programmed to mimic the change in color and warmth of natural light—white and bright in the morning and yellow and warm near dusk—that research has shown affects human health. Then there are quite a few experimental technologies, such as the house's heating and cooling system and Honda's own energy management system that monitors and controls electricity production and use throughout the home. The university's California Lighting Technology Center, Western Cooling Efficiency Center and other departments contributed to the home's design.

Image by Honda. Engineers at UC Davis designed a heating and cooling system with water that runs through pipes under the home's floor and in the second-floor ceiling to regulate the indoor temperature. (original image)

Image by Honda. LED lights are programmed to mimic the chance in color and warmth of natural light. They are white and bright in the morning. (original image)

Image by Honda. At night, the lighting is yellow and warm. (original image)

Image by Honda. Honda plans to collect energy and other data from the home's occupants for three years. (original image)

Honda didn't just want to build a model home. It wanted to know: can this house really provide a comfortable and healthy living space? It chose UC Davis to host this living lab because the company worked with the university on car-sharing research back in the 1990s. It's also no accident that the home is located in West Village, a community on campus that's designed to achieve "net zero energy," or that it could generate enough energy to meet its needs over a year period. While the home is designed to accommodate suburban living in a place where the summer temperatures reach the 90s, its many designs, materials and equipment can be applied to urban housing. To promote energy efficient home construction, Honda has put many of the home's technical specs online.

For its first set of occupants, Honda advertised its desire to host a family from the university community that has no pets, can move in quickly and is interested in sustainable living. The family also had to be open to doing interviews and receiving visitors from the media and public. The visitors have ranged from Governor Brown to two students who were intrigued by the house and rang the doorbell at 11 o’clock one night.

The company also looked for a commuter in the family who would need to drive about 30 miles per day, because it wanted a driver for the electric Fit and charging equipment it would provide. O'Hara and Bennett moved in less than two months after they applied.

Koenig's interest in sustainable home design is personal. He wanted to build an energy-efficient home for himself in Ohio, where he was working for Honda's research and development center before he was transferred to Los Angeles three years ago. Good information about sustainable materials and home construction was hard to come by, he found.

"I was getting reasonably close to figuring it out," Koenig recalls. "In the U.S., it's difficult to search for and understand how sustainable many products are. It was hard to find sustainable wood—we spent a lot of time investigating it. But individuals can't afford to spend that much time."

What impressed Bennett and O'Hara when they first stepped into their future home on a hot day was the cool air that greeted them. Honda designed the home to forgo the need for a conventional air conditioner and heater. The south-facing windows have sloping eaves to block the sun during the hottest time of the day, but they allow the low-angled light of the winter sun to come in to warm the home. The walls are thicker than typical homes to provide more insulation while the roofing material reflects rather than absorbs light. The polished concrete floor provides more insulation. The concrete itself is infused with a naturally occurring material called pozzolan to reduce the amount of cement needed. Cement production accounts for about 5 percent of manmade carbon emissions.

Engineers at UC Davis designed a ground-source heat pump system in the yard, with 24-inch-wide, 20-feet-deep bore holes that use the relatively stable temperatures of the earth to cool or warm the air that flows through the house. The system heats up or cools down the water that runs through pipes under the home's floor and in the second-floor ceiling to regulate the indoor temperature. While ground-source heat pumps aren't a new concept, the one at the smart home uses a novel design to reduce cost. The bore holes are much shallower and wider than typical heat exchange wells, which tend to be several dozen feet deep and six inches in diameter. Digging these shallow wells can reduce cost by as much a 90 percent, says Jonathan Woolley, a research engineer at the Western Cooling Efficiency Center at UC Davis.

"When we came to visit, I was shocked that it was 74 degrees inside when it was 104 outside," O'Hara says. "You don't need the noisy air conditioning. In the winter, you come home to a floor that is warm to the touch. It's very nice."

Honda also designed the home to be three times more water efficient than a typical house. It features dual-flush toilets, an efficient washing machine and dishwasher, and low-flow faucets that shut off automatically. The heat-exchange system also makes it possible to get hot water quickly, without wasting the cold water that often flows out of the faucet first. The home collects and filters gray water—used water from sinks, showers and the dishwasher—to irrigate the drought-resistant plants in the backyard.

The water efficiency features might get more attention these days as Californians are required to reduce their home water use by 25 percent compared to 2013. Governor Brown on April 1 ordered that mandatory water consumption cut, because the state is in its fourth year of drought and local water agencies haven't been able to meet the voluntary reduction goal that he set in January last year.

The energy efficiency designs have provided teaching moments for their daughters, Aisling and Sabha, who have taken to pointing out wasteful water and electricity use when they visit their grandmother, O'Hara notes.

Honda might add more technology over time, but currently it's focusing on collecting data from the first family that is living there. The family had a short learning curve to become familiar with the technologies. They like the programmable lighting and blinds that open and close early in the morning and at night, O'Hara says. She notes that some of the lights come on at 6 a.m. to help bring the family out of sleep, and that feature makes a big difference for one of her daughters who used to have trouble getting out of bed to get ready for school.

"There was a short adjustment period. After a month or two, it was seamless with our life," O'Hara says.

Honda plans to collect energy and other data from the home's occupants for three years. Although the Bennett family was supposed to live there for only a year, they wanted to stay for another year. Honda has agreed to that.

"It's difficult for me to live without all these technologies now. There's a sense that the house is living and breathing with you," O'Hara says. "It's become an integral part of our lives." 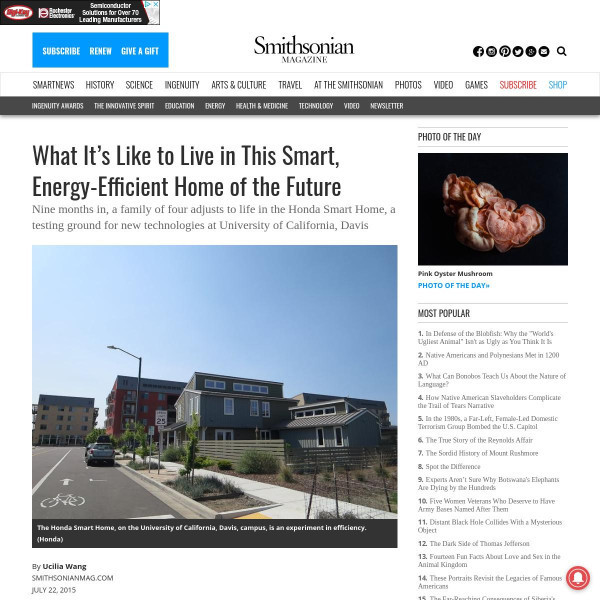