Change Author / Owner : Is #Hashtagging Your Environment on Instagram Enough to Save It?

Melissa Groo, the photographer behind the stunning giraffe photograph that graces Smithsonian Magazine’s March cover, knows better than most how to draw people's attention to the wild and the majestic.

To expand her reach, Groo often posts her far-flung photos to her popular Instagram. Her images from the field bring people up close and personal with creatures they might never otherwise see, from the albino-like spirit bears of the temperature rainforest that spills over the coast of British Columbia, to the brilliant flamingos that color the southernmost island of the Bahamas.

Like many Instagram users, Groo uses geotags—location-based tags on a photo that reveal where it's shot—to get people even more excited about conservation hotspots. But sometimes, she and other wildlife and conservation photographers worry that geotagging can have unintended effects. Drawing more amateur photographers to certain sites can disturb species and, in the worst of cases, even bring poachers—particularly with species like elephants and rhinos in Africa.

“That’s something there should always be cautious about,” she says. “The information age in some ways has presented real challenges to the safety of our subjects.”

Now, conservationists are imagining a better use for location-based tagging: pinpointing the sites that draw engaged visitors and seeing how they match up with conservation priorities. "Visualizing accumulated human choices," says Nobuhiko Yoshimura, a graduate student at Hokkaido University and lead author of a study recently published in the journal Ecosystem Services, "could contribute to evaluating the invisible values of nature.” Down the road, we might even can use that information to decide where to allocate funds into nature, conservation and tourism infrastructure.

As iconic and crucial ecosystems like the Great Barrier Reef and the Amazon rainforest decline around the world, conservationists have turned to innovative new techniques to increase awareness—from putting a price tag on nature (or the entire ocean) to using social media to clean up the reputation of sharks. But capitalizing on location tags that already exist on social media images may be an underused way to figure out what landscapes people value—and how they may react to changes to these environments.

For the study, the authors decided to look at ecosystems in the northern Japanese island of Hokkaido, a rugged region replete with mountains, volcanoes, natural hot springs and plenty of natural beauty. They used the concept of supply and demand, where "supply" represented the diversity in a given ecosystem and the "demand" represented the amount of photos posted of a particular area on the photo-sharing site Flickr.

Overall, natural areas in national parks, particularly areas with rivers or lakes and high levels of biodiversity, were very appealing to Flickr users, found Yoshimura and his coauthor Tsutom Hiura, a researcher at Tomakomai Research Station at Hokkaido University.

Spencer Wood, an environmental scientist at the University of Washington in Seattle, has been involved with a number of studies on how the public values natural spaces. He has measured visitation to national parks in the U.S. using crowd-sourced photographs on Flickr, as well as looked into how changes to some ecosystems can affect visitor levels. He's also reported a high recreational demand for clean water, based on the fact that the most popular postings on social media often match up well with clean water sources.

“We’re using people’s posts on social media as a source of information on their behavior," Wood says. "Where they recreate, and what types of environments they prefer to recreate in."

In another study, Wood found similar results to Yoshimura in terms of how tourist popularity equates with ecosystem services. Wood and his coauthors examined thousands of photos of Belize posted on Flickr, paying close attention to the frequency that beaches, reefs or concrete-lined water appeared in photos. They discovered that the most popular areas tended to align closely with local fishing interests.

Tourists often took pictures of healthy reefs and seabed grass, features that are also important for lobster fishermen who sell their wares both locally and for international export. Wood says that this kind of research can be used to inform development decisions in the area, since development that negatively affected fishing in some areas would also have an impact on tourism revenue.

Katie Chang, the educational services manager for the national conservation organization Land Trust Alliance, says that Yoshimura’s work represents an interesting approach, particularly in the way it seeks to interpret data that is already out there. Chang, who manages a census of national land trusts for the alliance, says the use of social media could help solve the problem of relying too much on self-reported data, which has pitfalls in terms of objectivity and whether it fairly represents a larger population.

She had some concerns with relying too much social media data, however, particularly if broader regions are being compared. The western U.S., for example, has a lot more land and open spaces but much less people than the country’s Northeast. This means that the the latter region is likely far more photographed than the former, and the importance given to these regions could be affected as a result.

Moreover, despite Wood and Yoshimura's conclusions, what people value simply doesn't always align with the most important features or aspects of a particular area in terms of ecosystem services. The jagged top of a mountain may be the ideal spot for a scenic group selfie—but it's not necessarily as productive for wildlife as a less-attractive swamp. In other words, relying too much on social media could spawn a popularity contest, rather than real discussion on areas important for conservation.

For example, in Yoshimura’s study, the authors found that certain national parks like the Kushiro Shitsugen National Park were more popular on Flickr than other parks like Daisetsuzan and Shikotsu Toya national parks. But the discrepancy likely had more to do with accessibility than beauty, conservation value or anything else, he says.

“The parks with large supply gaps were considered to have poorly accessible areas in their forest, whereas Kushiro Shitsugen National Park is mainly marsh and it was visible from enough viewpoints,” the authors write.

Rob Aldrich, director of community conservation at Land Trust Alliance, also notes that there could be a difference between what visitors to an area photograph, versus what locals value. In Wood’s study on Belize, local fishermen’s desires for healthy lobster populations aligned with the tourist focus on healthy reefs, for example, but this might not always be the case. “[Nature] has different values for different people, even in the same community,” says Aldrich.

He adds that the usefulness of social media for conservation is good in that it can help land trusts or other conservation organizations decide which parcels of land are most important to save for a local community based on how much they may be photographed. However, “it’s only one piece of the criteria and there’s a lot more data that goes into the decision of what pieces [of land] to save,” he says. Other factors: ecosystem services, importance to local community or economy, or historical value.

In the end, hashtagging your local environment may not be enough to save it. But Wood says that using social media to figure out important areas is a vastly cheaper way to derive some information than traditional means like surveys. “This is just one additional source of information to help guide the decision making,” he says. 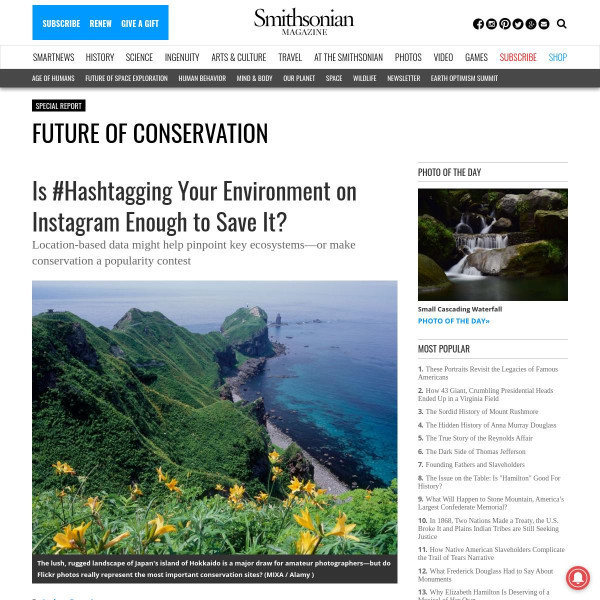