The Amazon is arguably the most biodiverse place on Earth. The 4,000-mile river that runs from the Andes to the Atlantic Ocean is surrounded by a two and a half million square mile river basin, roughly the size of Australia, and claims some 2.6 million species with many more still unknown to science. It turns out that as vast as the region is now, the modern Amazon rain forest ecosystem represents but a fragment of the diversity of habitat and wildlife that existed between ten and 18 million years ago when it was seasonally flooded with ocean water from the Carribbean Sea.

Carlos Jaramillo, a staff scientist at the Smithsonian Tropical Research Institute and lead author of a new research paper published this week in Science Advances has concluded that the Amazon once possessed a vast inland sea surrounded by seasonally flooded land. The Caribbean waters penetrated deep into the west Amazon with the salty ocean water flooding the forests during raining seasons and receding from some areas during the dry seasons.

Previously, the Amazonia region of South America was thought of as having been dry land throughout its history. Jaramillo, who was initially skeptical of the idea, was able to piece together this portrait of a lost ecosystem by digging up fossils. He took deep core samples of rock and soil and studied exposed outcroppings at many locations around today's Amazon.

“I thought it was impossible,” Jaramillo said as he stood in his spacious Panama City office beside a long table covered in books, printed scientific papers and fossils of bones and plants waiting to be categorized. “It's hard to imagine that you could have the Caribbean ocean in the west Amazon. . . . it's too far away. The Amazonian rains a lot so you have a lot of sediments. It's very hard for the ocean to gain terrain through the rivers.”

But he says, if you could travel back in time, 18 million years ago, and fly a hundred feet above the ground, you would experience a world where land and water intermingled across a vast region. He walked a few paces to a computer screen and pressed 'play' to reveal a digitized model showing the shifting range of the lost sea over time.

“During the dry season you will see permanent rivers and maybe hundreds of isolated lakes of different sizes,” Jaramillo says. “And in between the lakes you will see forests. Then [during] the rainy season many of those rivers will flood the whole landscape. Maybe a few places will be dry. And the next dry season, the lakes and rivers will shift position. That continues, but on a continental scale.”

The theory that the Amazon Sea once existed is not new, says Donald R. Prothero, a geologist specializing in the history of South America. It dates back at least to the 1950s, but evidence for it had been weak until now.

"I think that the key thing here is that [the theory] was [previously] all based on very limited outcrops," Prothero says. "It's hard to get anything good in the Amazon because it is so heavily grown over with plant matter. That is what is crucial. The fact that they have a core sample now that gives a continuous record of the whole Miocene, based on what they said in the paper."

In spite of his initial skepticism, Jaramillo found fossils that could only be explained by an inland sea that persisted and moved for millions of years. Fossils of mantis shrimp, shark teeth, dinoflagellates and saline-loving bacteria were discovered deep beneath the rain forest. As he was able to date the samples, a picture began to emerge. This was not a one-time flood. It was a complex, long-term ecosystem.

Samples were taken from exposed outcroppings along river banks, such as the Soliõmes River in Brazil. (Carlos D'Apolito)

Amazonia of the past was dominated by large crocodilians at the top of the food web, says Jaramillo, who describes a world in which the creatures in a variety of shapes and with lifestyles unlike modern crocodilians swam and crawled across Amazonia.

“There were crocodiles eating only shells, they had a face that looked like a duck,” Jaramillo says of the  huge, 56-foot-long purussaurs, the largest crocodyliformes that ever lived on Earth. So tall that standing face-to-face with a fully grown purussaur, he says, you would probably find yourself staring directly into its eyes. They were the largest reptiles that the Earth has witnessed since the end of the non-bird dinosaurs.

Turtles of different sizes and mammals, including the diverse family of toxodontids, were also present. Many types of fish and huge numbers of molluscs represented a large part of the total biomass.

Studying deep core samples like these, Jaramillo pieced together a portrait of a lost ecosystem. (Vladimir Zapata and Carlos D'Apolito)

Jaramillo says that his paper shows the emergence and eventual demise of the Amazon sea were both probably caused by the influence of the young Andes mountains.

When the Amazon was pushed downward by tectonic forces, water was able to easily intrude from the ocean. But later the dynamic of forces from the Andes began to change.

“Around 10 million years ago it shifted away from Amazonia. The whole region, instead of going down, it started to shift up,” Jaramillo says.

Jaramillo shook his head emphatically when asked if there is any modern equivalent to the lost ecosystem described in the paper. “There is not a place on the planet that you could go to and see something like that on the scale of what we see in the Amazonia,” he says. “Maybe a few places in the Congo but never to the same extent. It's not really a swamp, it's not really a lake.”

Prothero believes that the evidence presented in Jaramillo's paper is compelling enough to rewrite history. “This radically throws out a lot of what was said about the Amazon in the past,” Prothero says. “It's coming from indisputable marine beds.”

This is not Jaramillo's first major discovery. In 2009 he was part of a team of scientists that discovered titanoboa, a species of snake that lived in South America about 60 million years ago, shortly after the demise of the dinosaurs.

Titanoboa was long gone by the time the Amazon sea emerged about 18.4 million years ago during the Miocene epoch. At that time, the age of mammals was well underway. Earth's continents looked very similar to the modern globe. Early horses roamed North America. Modern-looking crows and ducks had emerged. South America was still not connected to North America, so it harbored unique animals that had evolved in relative isolation from the rest of the world.

Like paleontologists, who dissolve the hard, rock-like structures of dinosaur bones with a mild acid to check for blood vessels and proteins in soft tissue, Jaramillo says that will be his next step. “The turtle shells usually have proteins preserved,” he says.

Editor's Note May 8, 2017: This article originally misstated that the Amazon river runs from the Andes to the Atlantic Ocean. It runs to the  Caribbean.​ 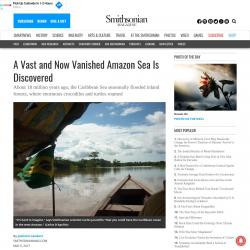