This verse on Betsy’s sampler offers a rare opportunity to discover the political thinking of a young girl during the Revolutionary War. She is showing a brave female defiance of Britain and an unwavering faith in George Washington, the commander of the Continental Army. Betsy undoubtedly was influenced by her father who was a privateer during the Revolutionary War. At the bottom of the sampler, flanked by queen stitch flowers, is a cartouche with the inscription:

It is not known who the author of the inscriptions is. The sampler is stitched with silk embroidery thread on a linen ground with a thread count of warp 25, weft 23/in. The stitches used are cross, crosslet, queen, rice, straight, fly, stem, tent, and gobelin. 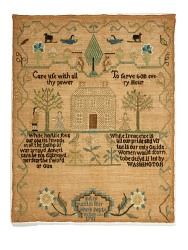 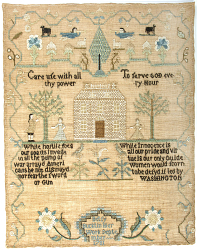 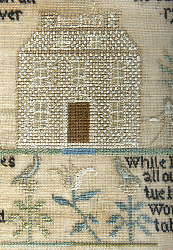