Change Author / Owner : Would the Legendary Babe Ruth Still Be a Star if He Played Today?

Baseball has been a part of the author Jane Leavy’s life from the time she acquired her first baseball mitt as a youngster growing up on Long Island. Her second home was her grandmother’s apartment, in the Yankee Arms, a building a long loud foul ball from Yankee Stadium. Naturally, as a lover of sports, the Bronx Bombers became her main squeeze.

Leavy is an acclaimed sports writer, formerly for the Washington Post, and the author of best-selling biographies about Sandy Koufax and Mickey Mantle. Her current project, a biography of the Yankee’s immortal slugger, Babe Ruth, The Big Fella will be available in the fall of 2018. Concurrent with a show I curated at the National Portrait Gallery exhibition, “One Life: Babe Ruth,” I invited Leavy to share her insights about one of America’s most iconic sporting legends.

What attracted you to Babe Ruth? For Ruth, there are so many gaps in primary sources, is a thorough biography possible?

Where do you go after Koufax and Mantle? The Babe. The more difficult question for me is where do you go AFTER The Babe. I was very concerned about the lack of primary sources when I agreed to do the book. I’m a journalist. Talking to people—and finding people to talk to—is what I’m trained to do. For this project, I had to learn to be more of a historian than a reporter. I had to learn to plumb newly digitized state and newspaper archives to find material about his early life that wouldn’t have been readily available to previous biographers. So what began as a daunting challenge actually became an advantage.

Who are you interviewing? Are you able to bring new reportage to this story? What are you learning?

I tracked down as many of his far-flung descendants as I could with the understanding that much of their knowledge was anecdotal at best and not all of it would survive fact-checking. I was able to find an astonishing number of 90-year-olds who had met him in the 1940s.  Their childhood recollections helped capture the awe he was held in by kids even as he was aging and dying. I dug up as many relatives as possible of folks who either participated in or attended his barnstorming games in October 1927. That barnstorming tour, orchestrated by Ruth’s agent Christy Walsh, for Ruth and Gehrig forms the spine of the book.

Ruth routinely ignored most of the traditional training and fitness régimes most athletes adhere to. How could he manage to excel as a baseball star?

The caricature of the fat man on “debutante” ankles is what we remember but it wasn’t an accurate picture of The Babe who hit 59 home runs in 1921. He was sublimely talented but he was also bigger, taller and stronger than any of his contemporaries.  He stood quite literally head and shoulders above them. In his early years, before he bulked up—to put it kindly—he was 6’2” and perhaps 200 pounds. The reason he remains undoubtedly the best player in Major League history is that he was both an extraordinary pitcher for the Boston Red Sox, a league-leading lefty starter who might well have made the Hall of Fame on those credentials, as well as the man who created power baseball.

How would Ruth have fared in today's world, both in and out of the ball park?

Off the field, he’d have protectors to shield him against his own worst instincts but he’d be subject to iPhone stalkers and the videos that have exposed present day athletes—see Michael Phelps et al. And he wouldn’t have a complicit press corps willing to draw and observe the line between public and private. He’d be as big a personality as he was then but he wouldn’t be the original he was when he decided to remake baseball in his own image. His peers would be as large physically as he was or bigger and, of course, he’d have to face the best of the very large pool of African-American talent that was barred from Major League competition.

What aspect of Ruth's life do you find to be the most compelling to contemplate—his baseball prowess, his risqué social life, both?

I think he was a revolutionary, an inadvertent radical, a man who decided not that he was bigger than the game but to make the game bigger than it was. Why should he play small ball and allow the game to be dictated from the dugout when he can control it from the batter’s box? Why shouldn’t he barnstorm against Negro Leaguers? Why shouldn’t he hire an agent—the first in professional sports—to represent his interests? He reinvented the game on and off the field in his own image.

Ruth was a loquacious extravert. Did he have a secret life? Was he good at keeping secrets?

Yes, he was good at keeping secrets but he also had a lot of help from the press until Joe Patterson, owner of the New York Daily News, decided to cover him by modern standards, exposing in 1925 the extra-marital affair with Claire Hodgson that ended his first marriage. He wouldn’t get away with it today.

How long did it take to research and write your biography of Ruth? Did you encounter any surprises? Did Ruth's few descendents have any insights to share?

I’m still making calls and still researching so it’s going on six years. Yes, but I’ve got to keep some of those surprises for the book. His daughter Julia Ruth Stevens, a very gracious woman now 100-years-old, told me something that became a sort of touchstone in my understanding of him. When I asked her what he shared about his years at St. Mary’s Industrial School, the reform school in Baltimore where he was sent by his parents, she replied, “He said he never felt full.” I think that was both a literal and emotional truth for him.

As a former sports reporter, have you met any athletes who reminded you of Ruth in character and temperament? And in what way?

How extraordinary was Ruth? Does he live up to the legends about him? Was Ruth truly one of a kind?

To quote the late Jim Murray, of the Los Angeles Times:  "A star is not something that flashes through the sky. That’s a comet. Or a meteor. A star is something you can steer ships by. It stays in place and gives off a steady glow; it is fixed, permanent. A star works at being a star… Stars never take themselves for granted. That’s why they’re stars.” That’s Ruth

"One Life: Babe Ruth" is on view through May 21, 2017 at the National Portrait Gallery in Washington, D.C. 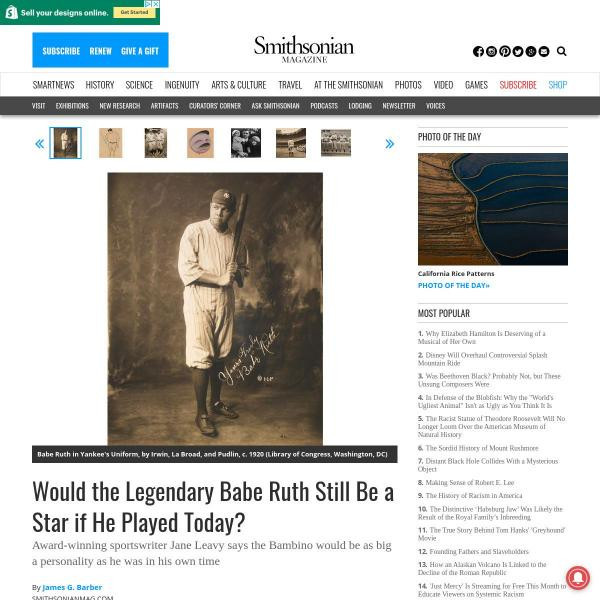